‘Holostei’ is a traditional clade with just a few members,
(Figs. 1-4) now widely scattered in the large reptile tree (LRT, 1515 taxa; Fig. 5). Two are extant. They are considered midway or transitional between sharks (with no bones) and bony fish (with bones). 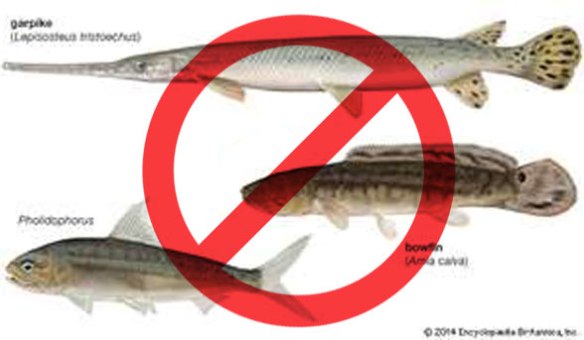 Figure 1. Taxa that make up the traditional but invalidated clade, Holostei include Lepisosteiformes, Ammiformes and the Triassic Polidophorus. They don’t look alike here and they appear in distinct clades in the LRT. Image from Encyclopedia Brittanica needs to be updated.

According to Wikipedia
“Holostei are eight species divided among two orders, the Amiiformes (the bowfin Amia calva) and the Lepisosteiformes (the garpike Lepisosteus).” Encyclopedia Brittanica added the Triassic xx, Pholidophorus (Fig. 2).

Pholidophorus sp. (Agassiz 1832; Middle-Late Triassic; 40cm long) was a herring-like fish with primitive ganoid scales and poorly ossified spine. Traditionally considered an early teleost, with large eyes, here it nests with Late Devonian Strunius, but lacks the central posterior process of the tail. Here the skull bones are re-identified with tetrapod labels. The pectoral and pelvic fins were similar in size. This iconic fish shape is indeed plesiomorphic for ray-fin fish according to the LRT.

Figure 3. Cladogram from wiki/Holostei showing traditional interrelationships among other vertebrate taxa. In the LRT bichirs nest with lungfish, sturgeons with ratfish.

My guess is
taxon exclusion is once again the culprit, followed closely by ‘Pulling a Larry Martin‘, followed more distantly by a lack of consistency in skull bone names. Here (Fig. 2) fish skull bones are colored as homologs to tetrapod skull bones, a long needed suggestion first promoted by Schultze 2007.

Though distinct in overall appearance,
traditional members of the Holostei are united by a few traits. The late Dr. Larry Martin was famous for challenging the nesting of taxa based on a few traits, because most traits can also be found elsewhere on the family tree by convergence. In the LRT hundreds of traits nest every taxon, reducing the influence of convergence and exposing the convergence that appears in traditional Holostei.

Figure 4. Cladogram of the Pachydormidae and outgroups among traditional Holostei (yellow boxes) from Wikipedia

The LRT tree topology
is distinctly different from prior cladograms. It has a wider gamut than in figure 4, but does not include as many partial or poorly known taxa. Note the disbursement of Amia, Pholidophorus and Lepisosteus.

Figure 4. Subset of the LRT focusing on fish. Note the traditional members of the Holostei do not nest together here largely because they don’t look alike, but more like other, more attractive taxa.

Amia calva (Linneaus 1766; up to 70cm in length) is the extant bowfin, a basal fish related to gars, able to breathe both water and air. Rather than two dorsal fins, an single elongate undulating fin is present. Hatchlings look like tadpoles or miniature placoderms. The squamosal an quadratojugal are absent. The postfrontal is fused to the frontal + parietal. In contrast, the lacrimal and jugal break apart into several bones. Females produce 2000 to 5000 eggs. Fossil relatives of Amia have a worldwide distribution in fresh and salt waters.

Lepisosteus osseus (Lacepéde 1803) is the extant longnose gar. Note the jaw joint is in front of the orbit, similar to the stickleback, Gasterosteus. The longest teeth arise from the inside the of jaws, the long vomer. The rostrum is lined by the premaxilla. The maxilla is absent. The traditional jugal is the lacrimal. Compare Lepisosteus with the juvenile swordfish, Xiphias, which nests as a sister and shares many traits, including long toothy jaws and an elongate body.

Wikipedia reports,
“The thick ganoid scales of the gars are more primitive than those of the bowfin.” That is refuted by the LRT, which nests gars as derived taxa along with sticklebacks, pipefish and seahorses, all of which have a bony elements in the dermis.

Wikipedia reports,
“The spiracles are reduced to vestigial remnants and the bones are lightly ossified.” In derived fish with external skeletons, like the placoderms, sturgeons, puffers, gars and seahorses, the internal skeletons tend to be poorly ossified.

This is not the first time the LRT has split apart traditional clade members.
Over the last eight years the LRT invalidated several other traditional clades including Ornithodira, Parareptilia, Cetacea, Pinnipedia, Pterodactyloidea, Monofenestra, Scrotifera, Euarchontaglires, Scandentia, Pseudosuchia, Notoungulata, etc. This is what a wide gamut phylogenetic analysis can do. Links to the above traditional clades can be accessed by using the ‘keywords’ box above.