Yesterday we looked at a new paper on an old topic,
the ability of ‘large enough’ pterosaur hatchlings to fly shortly after hatching (Unwin and Deeming 2019). I say, ‘large enough’ because some fly-sized hatchlings of hummingbird-sized adults were not large enough to avoid desiccation due to their high surface/volume ratio. This was likely the origin of quadrupedal locomotion from bipedal pterosaur ancestors. Such tiny hatchlings had to remain within high humidity leaf litter environs until reaching that minimum size for flight. And they probably drank a lot of water.

On the publicity tour for Unwin and Deeming 2019,
the NYTimes.com published an article that contained a rather high-resolution picture of a small Late Jurassic pterosaur, Ningchengopterus (Figs. 1-3; Lü 2009) that is several magnitudes better than the originally published line drawing.

Figure 1. ?Ningchengopterus in situ. Note the narrow-at-the-elbow wing membrane and manual digit 5 near the wrist. There is no wing membrane connection to the lower leg or ankle, only a ‘fuselage fillet’ inside the elbow.

Despite the additional data and several scoring changes,
the nesting of Ningchengopterus in the LPT did not change. So crappy data sometimes work. Crappy character lists sometimes work. Taxon exclusion never works. Let’s treat every pterosaur specimen as a taxon, like the LPT does, and see which taxa are associated with many times larger adults… and which nest with other tiny pterosaurs under phylogenetic miniaturization.

Figure 2. Ningchenopterus reconstructed using DGS methods. Sure it’s small, but not much smaller than sister taxa after phylogenetic analysis.

Ningchengopterus preserves a complete proximal wing membrane
(Fig. 1) that confirms the findings of Peters 2002, in which evidence for a narrow chord pterosaur wing membrane that was stretched between the elbow and wing tip was presented for all pterosaurs in which the soft tissue is preserved, distinct from traditional bat-wing models proposed without evidence by several PhDs.

Figure 3. Finger 5 in Ningchengopterus is very clear, but overlooked by all other pterosaur workers.

Manual digit 5 on pterosaurs is a vestige
(Fig. 3) that has been overlooked by all prior pterosaur workers. Ningchengopterus preserves manual digit 5 without question.

Figure 4. The Painten pterosaur phylogenetically nests between two smaller specimens in the LPT. This is an earlier reconstruction of Ningchengopterus. 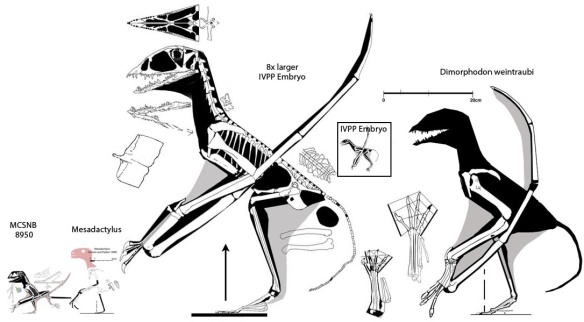 Figure 5. Large anurognathids and their typical-sized sisters. Here the IVPP embryo enlarged to adult size is larger than D. weintraubi and both are much larger than more typical basal anurognathids, Mesadactylus and MCSNB 8950.

There is (so far) only one exception to the above rule:
The IVPP anurognathid embryo (Fig. 5) is the same size as several adult sister taxa, like MCSNB 8950 and Mesadactylus. So undiscovered adults will be giant basal anurognathids when found. One incomplete and mislabeled sister taxon, ?Dimorphodon weintraubi, is closer in size to the hypothetical adult of the IVPP embryo, demonstrating the possibility of a giant anurognathid is real. Again, phylogenetic analysis works out all such problems.

Figure 6. The Vienna Pterodactylus. Click to animate. Wing membranes in situ (when folded) then animated to extend them. There is no shrinkage here or in ANY pterosaur wing membrane. There is only an “explanation” to avoid dealing with the hard evidence here and elsewhere.

References
Lü J 2009. A baby pterodactyloid pterosaur from the Yixian Formation of Ningcheng, Inner Mongolia, China. Acta Geologica Sinica 83 (1): 1–8.
Peters D 2002. A New Model for the Evolution of the Pterosaur Wing – with a twist. – Historical Biology 15: 277–301.
Unwin DM and Deeming DC 2019. Prenatal development in pterosaurs and its implications for their postnatal locomotory ability. Proceedings of the Royal Society B https://doi.org/10.1098/rspb.2019.0409