Updated December 14, 2020
Adding taxa since this post documents the origin of jaws in Chondrosteus (Figs. A, B). And the origin of teeth in the larva of Polyodon, the paddlefish, prior to sharks and more primitively than in placoderms, which are catfish cousins that have likewise lost their teeth.

Figure A. Shark skull evolution according to the LRT. Compare to figure 1.

Figure B. Chondrosteus animation (2 frames) in situ and reconstructed in lateral view. This is the transitional taxon linking sturgeons to bony fish + sharks.

Placoderms
are nearly extinct fish with bony skulls and pectoral girdles/shields. Placoderms were experimenting with fins, tails, teeth and jaws, convergent with taxa in the shark/ ray/ ratfish/ sturgeon clade. The last common ancestor for sharks + placoderms in the large reptile tree (LRT, 1495 taxa) is the jawless, toothless thelodont that was just then developing pectoral fins, Thelodus.

Since this was posted, adding taxa (Fig. A) changes everything said here. 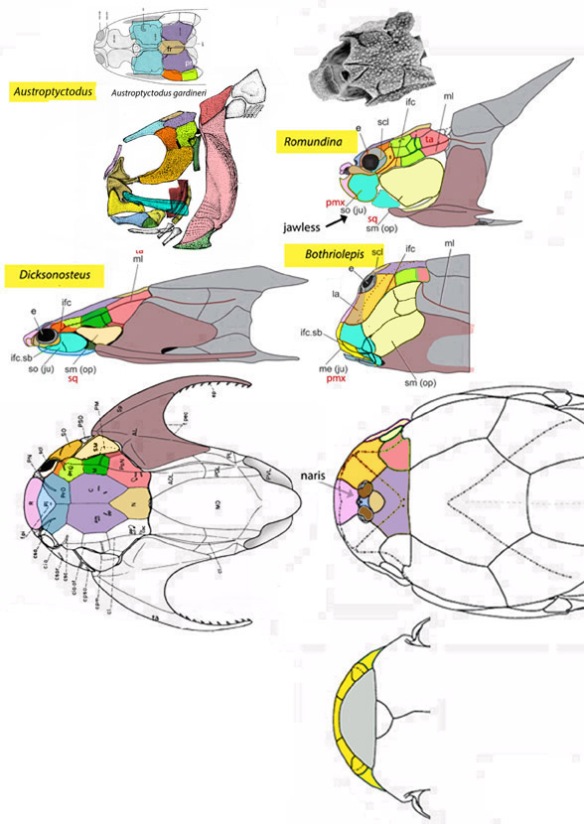 As we learned earlier
here, fish skulls have the same (homologous) bones as tetrapod skulls, but they are not labeled with tetrapod names  in paleo textbooks. Hopefully that will change someday.  Here they have the same colors, which both solves and avoids the labeling problem.

The newly added taxa bring the placoderms back into one clade,
and it still includes the walking catfish (Clarias, Fig. 4.).

Rücklin and Donoghue 2015 discussed the evolutionary origin of teeth.
They wrote, “Theories on the origin of vertebrate teeth have long focused on chondrichthyans as reflecting a primitive condition—but this is better informed by the extinct placoderms, which constitute a sister clade or grade to the living gnathostomes. Here, we show that ‘supragnathal’ toothplates from the acanthothoracid placoderm Romundina stellinacomprise (Fig. 1) multi-cuspid teeth, each composed of an enameloid cap and core of dentine. Teeth are bound to a bony plate that grew with the addition of marginal teeth. The presence of enameloid in the teeth of Romundina suggests that it has been lost in other placoderms. Its covariation in the teeth and dermal skeleton of placoderms suggests a lack of independence early in the evolution of jawed vertebrates. It also appears that the dentition—manifest as discrete gnathal ossifications—was developmentally discrete from the jaws during this formative episode of vertebrate evolution.”

Rücklin and Donoghue did not realize
the extant walking catfish, Clarias, is a living placoderm in the LRT where Romundina is a derived placoderm (Fig. 4). So supragnathal’ toothplates developed by convergence with other fish and enameled was a convergent novel trait in Romundina.

In similar fashion,
the teeth of Clarias, the extant placoderm and walking catfish occur as numerous small points in large bands (supragnathal’ tooth plates) in both jaws (Fig. 3). Prey is inhaled, not bitten. Walking catfish consume a wide variety of prey, including eggs and larvae of other fish, small fish, and invertebrates.

Dupret et al. 2017 discussed
the origin of jawed vertebrates. The wrote: “Placoderms are considered as the first jawed vertebrates and constitute a paraphyletic group in the stem-gnathostome grade. In contrast to Stensioe’s view that placoderms have chondrichthyan affinities, the majority opinion in recent years has been that they are members of the gnathostome stem group. The anatomy of Romundina is thus of great interest to investigate the origin of the jawed vertebrate condition.”

The LRT shows Romundina is in the process of losing its mandible
(via atavism, neotony), and is therefore not informative regarding the origin of jaws. Rather the extant taxon, Squatina (Fig. 2), informs the origin of jaws in vertebrates from former gill bars and the jawless outgroup taxon, Thelodus. 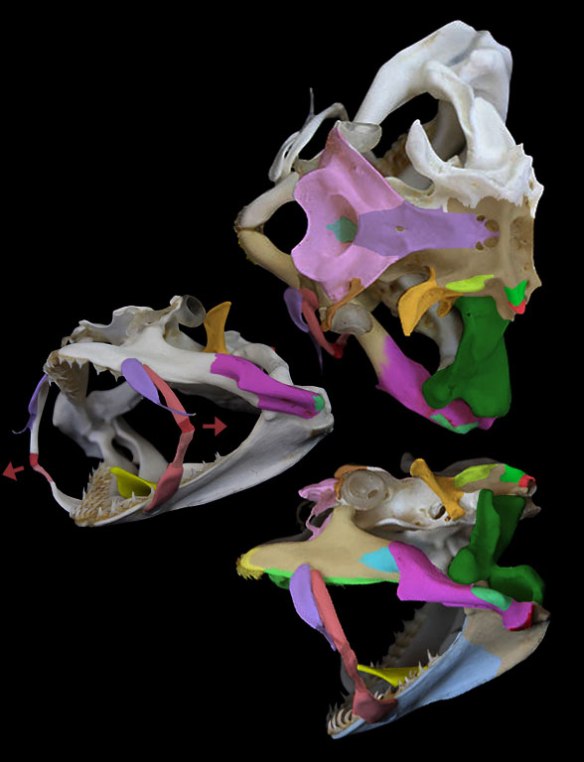 Figure 5. Squatina skull. Note the gill bars framing the mouth. These are modified in Aetobatus into a digging snout.

Another basal taxon in the tetrapod lineage with jaws and teeth
is Kenichthys (Figs. 4, 5) previously famous for having choana (internal nares) at the jaw margin. Now I’m looking for a transitional taxon that will fill the gap between Entelognathus and Kenichthys at the base of the bony fish (sans catfish, sans sturgeons) with jaws. Guiyu is also near the base of the clade of bony fish and it provides data on the post-crania. It is worthwhile comparing the tooth plates of the catfish (Fig. 3), to those of Kenichthys (Fig. 5).

Overlooked catfish teethpty
(Fig. 3). greatly inform the origin of both jaws and teeth in vertebrates.

Figure 4. Subset of the LRT focusing on the clade Placodermi. Skulls are Entelognathus (above) and Kenicthys (below).

The nesting of catfish with placoderms
and demonstrating the origin of teeth in bony fish has been overlooked by all living paleontologists employing phylogenetic analysis to recover relationships (= taxon exclusion).

Figure 5. Kenichthys Images from Zhu and Ahlberg 2004, colors added. The authors made a convincing argument that Kenichthys represented a transitional taxon between Youngolepis and Eusthenopteron. Note the lack of vomer fangs and a distinctly different set of skull sutures in Kenichthys, which does not nest with Eusthenopteron in the LRT. Compare the palate view to the catfish in figure 3.

Dicksonosteus arcticus (Goujet 1975; Early Devonian) is basal to the jawless placoderms, Bothriolepis and Romundia, as well as the larger jawed predators, Coccosteus, Mcnamarapsis and Dunkleosteus. Like other basal taxa, it wide and flat.

Bothriolepis canadensis (Eichwald 1840; Late Devonian; typically 30cm, up to 100cm in length) is a jawless placoderm with a tall skull and armored pectoral fins. The postfrontal makes up most of the cheek region. The intertemporal, supratemporal and tabular are vertical. |

Romundina stellina (Ørvig 1975; Early Silurian; 20 cm long) is another jawless placoderm in which the premaxilla and maxilla are fused to become a large disc.