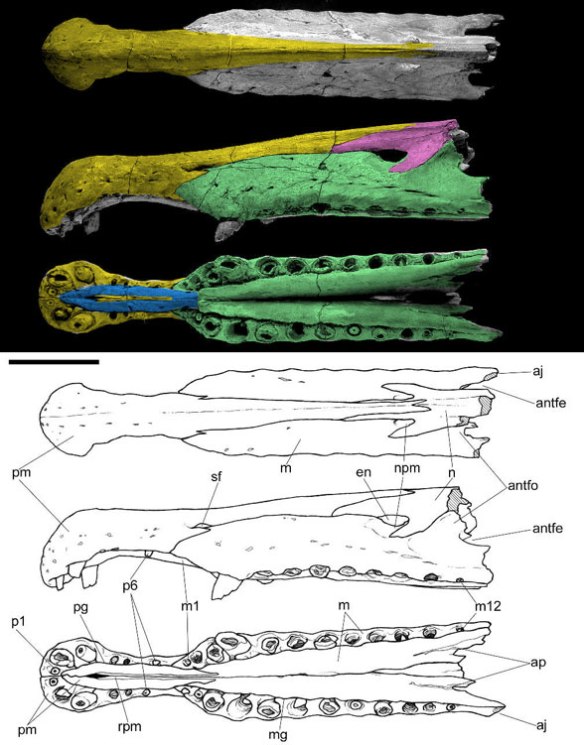 Figure 1. The rostrum of Spinosaurus MSNM V4047. Note the maxilla rising to close off the elongate naris into a reduced anterior and posterior opening. SF = sub-narial foramen.

I just found this fascinating.
The naris of Spinosaurus (Stromer 1915; Cretaceous; MSNM V4047) was overlaid by the maxilla sealing off most of what had been the elongate opening (Fig. 1).  I suppose that supports a semi-aquatic niche and reduced olfactory input. As others have noted, the rostrum has sensory pits, perhaps, as in crocodilians, for underwater vibration sensing.

Figure 2. Diagram from Dal Sasso et al. 2005, colors and overlay added to show dorsal expansion of the maxilla to cover an elongate naris.

Dal Sasso et al. 2005 wrote:
“The external naris is retracted farther caudally on the snout than in other spinosaurids and is bordered exclusively by the maxilla and nasal.” The authors identified the anterior naris as a ‘sub-narial foramen’. The naris continues to contact the premaxilla in all related taxa (Fig. 1). Here, just thinking about things differently, and more parsimoniously, the naris continues to contact the premaxilla.

According to Wikipedia
“MSNM V4047 (in the Museo di Storia Naturale di Milano), described by Dal Sasso and colleagues in 2005, consists of a snout (premaxillae, partial maxillae, and partial nasals) 98.8 centimetres (38.9 in) long from the Kem Kem Beds. Like UCPC-2, it is thought to have come from the early Cenomanian. Arden and colleagues in 2018 tentatively assinged this specimen to Sigilmassasaurus brevicollis given its size. In the absence of associated material, however, it is difficult to be certain which material belongs to which taxon.”