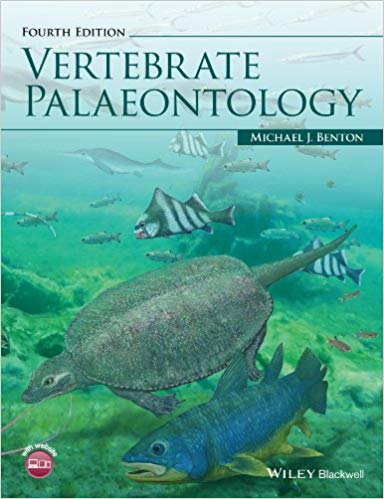 Prior reviews:
“The book is a main textbook for vertebrate palaeontology and aimed at students and anyone with an interest in the evolution of vertebrates. It meets its five aims and is excellent value.”  (Proceedings of the Open University Geological Society, 1 April 2015)

From the Amazon.com website:
“This new edition reflects the international scope of vertebrate palaeontology, with a special focus on exciting new finds from China. A key aim is to explain the science. Gone are the days of guesswork. Young researchers use impressive new numerical and imaging methods to explore the tree of life, macroevolution, global change, and functional morphology.

“The fourth edition is completely revised. The cladistic framework is strengthened, and new functional and developmental spreads are added. Study aids include: key questions, research to be done, and recommendations of further reading and web sites.

“The book is designed for palaeontology courses in biology and geology departments. It is also aimed at enthusiasts who want to experience the flavour of how the research is done. The book is strongly phylogenetic, and this makes it a source of current data on vertebrate evolution.”

A review from the perspective of the large reptile tree
Unfortunately this volume invalidates itself by taxon exclusion at many nodes. Readers are better served at ReptileEvolution.com where taxa are included and tested, not just reported on.

Dr. Benton has been caught excluding taxa
in the past (e.g. Hone and Benton 2007, 2009; Yang et al. 2018) to support his own outdated and invalidated hypotheses (like Scleromochlus, the bipedal croc with tiny hands as a sister to Bergamodactylus, the basal pterosaur with giant hands). His textbook presents several falsehoods about pterosaurs (e.g. open ventral pelvis, all were quadrupedal, origin from archosaurs). The first dichotomy splitting the Reptilia into Lepidosauromorpha and Archosauromorpha is not presented, leading to many mix-ups in derived taxa. Lacking is a wide gamut specimen-based phylogenetic analysis, like the large reptile tree, a modern requirement for every textbook on this subject in the present cladistic era. Rather, a number of smaller, more focused previously published studies are presented without review or criticism.

Finally,
because the Benton volume is a physical book, it cannot keep up with the weekly and daily additions of online competitors, like www.ReptileEvolution.com is able to do. The Benton book, and all such textbooks, start to become outdated the moment the authors submit their final drafts to the publishers, weeks or months before their publication dates. It’s just the nature of publishing. It cannot be avoided due to this time lag.

Popular books make similar mistakes
Naish and Barrett 2016 wrote a dinosaur book, “Informed by the latest scientific research.” Sadly, no. This book is a journalistic compendium of prior studies, many of which were invalidated by taxon exclusion. As in most traditional studies, bipedal crocs are ignored in their cladograms dealing with the origin of dinos. These authors also considered tiny bipedal Scleromochlus ancestral to pterosaurs + Dinosauromorpha (p. 34), following Benton 1999. This hypothesis of relationships was invalidated by Peters 2000 who simply added taxa ignored by 4 prior authors, including Benton 1999. We can also be disappointed that these PhD authors bought into the bogus Yi qi styliform reconstruction as a bat-winged bird amalgam without either a critical analysis or a second thought of this one-of-a-kind mistake. The authors also supported the debunked origin of birds from theropods of descending size (pp. 184–185). Authors and editors should have checked for logic errors like the following from Naish and Barrett: “The fact that a microraptor specimen preserves a fish in its belly, indicates that they were also spending time on the ground.”

Just let that sink in if you don’t get it right away.

Parker 2015
reports on traditional mishandlings of the evolution of reptiles considered and criticized here at ReptileEvolution.com and PterosaurHeresies. As is typical in traditional paleontology, too often sister taxa in Parker 2015 do not document a gradual accumulation of derived traits. For instance the first dichotomy in the Parker topology splits Synapsids from Sauropsids. So no amphibian-like reptiles are recognized. The next dichotomy splits Eureptilia from Anapsida / Parareptilia. So pareiasaurs nest with mesosaurs. Parker considers the origin of ichthyosaurs and turtles, “uncertain.” A wide gamut cladogram testing all possibilities has no such problem Parker splits the invalid clade Sauria into Lepidosauromorpha and Archosauromorpha, then splits Sauropterygia and Lepidosauria, then lumps Pterosauria and Dinosauria together in the invalid clade Avemetatarsalia / Ornithodira. And with Avemetatarsalia we once again return to Benton 1999, which keeps surviving like a zombie.

As others have noted,
the present day is a ‘Golden Age’ in paleontology where discoveries are being posted weekly if not daily. Paper textbooks just cannot keep up with the latest hypotheses of relationships when compared to online studies and critiques that can pop up within hours of academic publication.