Nesting as the proximal outgroup to all placentals in the LRT
is the slinky, omnivorous, often inverted marsupial didelphid, Caluromys. So that’s the morphology we start with. In the large reptile tree (LRT, 1376 taxa; subset in Fig. 2) Carnivora is the first placental clade to split off. Earlier we looked at the similarity in skulls between Caluromys and didelphid-like basalmost Carnivora, Volitantia, Primates, Glires and Maelestes (at the base of the tenrec-odontocete clade).

Always seeking ‘a gradual accumulation of derived traits’,
basal Carnivora, like civets (e.g. Nandinia) in the LRT are likewise slinky, omnivorous and often inverted. That starts to fade away with the raccoons, Procyon and Ailurus and later evolves to hypercarnivory in the extant mongoose (Herpestes). Based on the appearance of the mongoose sister, Cryptoprocta in Madagascar (135 mya) along with the Paleocene appearance of derived Carnivora, like Miacis and Palaeosinopa, basal Carnivora had their genesis early in the Mesozoic.

Gray 1821 defined Vivveridae
as consisting of the genera Viverra, Genetta, Herpestes, and Suricata. All tested taxa are basal members of the Carnivora in the LRT (subset in Fig. 2), so this clade is paraphyletic. Bowdich 1821 defined the clade Carnivora as it is used today.

Most derived Carnivora forsake their veggies
as they become highly specialized for predation. Two clades diverge from a common mongoose-like ancestor: one from a sister to Late Paleocene Miacis (Fig. 1), the other from a sister to Mustela, the European mink. Both are small, long-torsoed and short-legged still resembling the placental outgroup taxon, Caluromys. 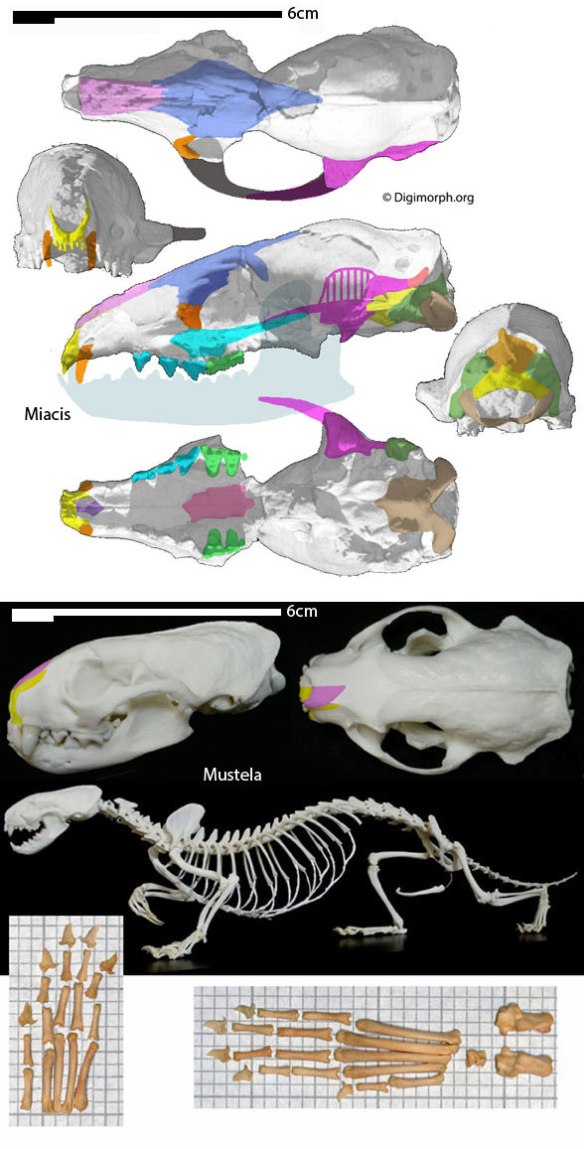 In the LRT
Miacis is basal to the clade of sea lions, dogs, cats, hyaenas and kin (Fig. 2).

Miacis parvivorus (Cope 1872; Heinrich et al. 2008; 30cm in length; Late Paleocene-Late Eocene) was originally considered a pre-carnivore, but here nests as a derived member of the Carnivora, arising from a Mesozoic sister to Herpestes, the mongoose. It was a sister to Mustela and Hyopsodus in the LRT. Miacis had a full arcade of 11 teeth (x4), but the canines and carnassial were smaller. Miacis had retractable claws, like a cat, and was likely arboreal.

In the LRT
extant Mustela is basal to the clade of wolverines, bears, seals and kin (Fig. 2).

Mustela lutreola (Linneaus 1761; extant European mink; up to 43cm in length) is a fast and agile animal related to weasels and polecats. Mustela lives in a burrow. It swims and dives skilfully. It is able to run along stream beds and stay underwater for one to two minutes. Mustela is basal to Puijila, Ursus and other bears, Phoca and other seals.

Importantly
note the relatively close affinity of dogs (Canis) and cats (Panthera), in the LRT. That becomes a factor in a genomic study below. 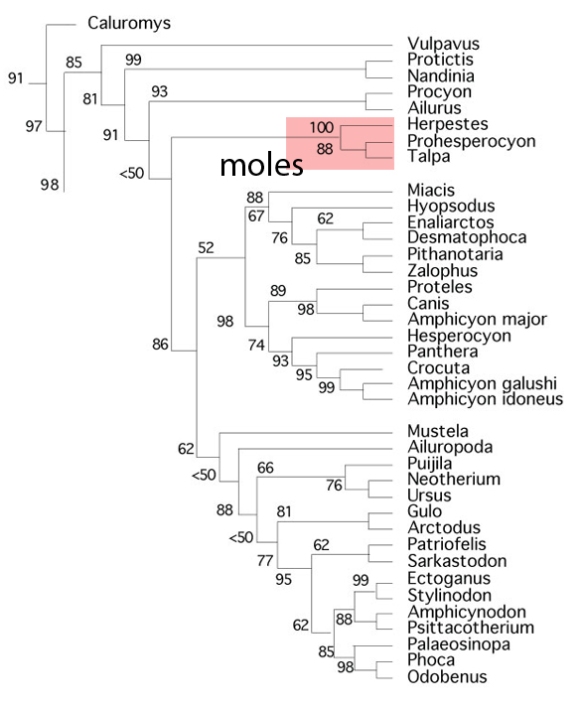 Figure 2. Subset of the LRT focusing on Carnivora, the basalmost eutherian clade. The two derived clades arising from Mustela and Miacis are shown here.

How does the clade Carnivora look to traditional paleontologists?
Flynn et al.2005 (Fig. 3) attempted to “assess the impact of increased sampling on resolving enigmatic relationships within the placental clade, Carnivora, by using genomic testing” (so no fossils there). In Flynn et al. the extant Carnivora have their first dichotomy splitting cats from dogs (which are also closely related in the LRT, Fig. 2). No outgroup appears in the Flynn et al. cladogram, which mixes primitive and derived taxa, relative to the LRT. Note, seals + sea lions are monophyletic when fossils are not included. Minks are highly derived here, the opposite of the topology in the LRT. So some relationships are simply inverted, which sometimes happens when the outgroup is not correctly defined.

Figure 3. Carnivora according to Flynn et al. 2005 based on genomic testing. Cryptoprocota is a ‘Malagasy carnivore.”

Once again,
genomic testing does not replicate phenomic testing in deep time. That’s why the LRT is here. So you can test traits vs. genes, always seeking ‘a gradual accumulation of traits’ that echoes or models evolutionary events, without relying on the hope and faith that must come from any analysis that omits fossil taxa. The LRT also provides a list of outgroup taxa back to Devonian tetrapods.

Based on a trait list,
or a photo (Fig. 1), it is easy to see that Miacis and Mustela are closely related. However, in phylogenetic analysis each of these sisters nest at the base of a different derived clade of Carnivora. Cats and dogs remain closely related in the LRT, but both are highly derived relative to the outgroup and basal taxa. The LRT reveals cats are convergent with basal Carnivora, like the cat-like civets.