Usually the last bones any paleontologist learns
are the names for the carpals and tarsals. That these names change with mammals makes learning them… less easy.

And then, a little later,
one comes to the lateral braincase bones (Fig. 1), which also change with mammals. Braincase bones are typically obscured by the overlying dermal bones in non-cynodont tetrapods. Often they are fused in big brained birds and mammals.

Figure 1. Braincase bones of pre-mammals and mammals from Hopson and Rougier 1993, with some (Thylacosmilus, Tupaia and Kryptobaatar) added here. Colors added. Is the large anterior lamina of Chulsanbaatar the result of fusion? It appears so, based on sister taxa. See figure 3.

Hopson and Rougier state, “The structure of the cranial wall [in Vincelestes] does distinguish monotremes and multituberculates form all other mammals in which the braincase is adequately known.”

Unfortunately,
this statement was made without a phylogenetic analysis testing a large suite of traits. By focusing on one or a few traits these authors are “Pulling a Larry Martin“. Moreover, by providing drawings alone, the authors did not permit the possibility of a misidentification.

Braincase bones and their alternate names

Not sure why
the single lateral braincase bone in multituberculates, like Chulsanbaatar, was labeled the anterior lamina by Hopson and Rougier, while the same bone in Didelphis and Asioryctes was labeled the alisphenoid (Fig. 1). Do these bones fuse or does one shrink and disappear?

Note that Thylacosmilus
(Fig. 1) retains both an anterior lamina and alisphenoid, just like its sister in the LRT, Vincelestes. 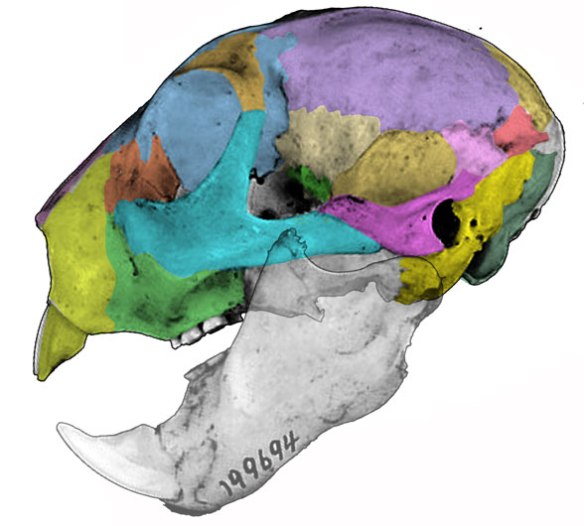 The braincase of the platypus,
Ornithorhynchus (Fig. 1), is greatly expanded, which explains its atypical appearance.

The origin of the braincase wall
Basal Tetrapoda have an ossified braincase buried beneath their dermal cranial bones. You can readily see braincase bones in therocephalians, like Lycosuchus, as the lateral temporal fenestrae grow so large they nearly contact one another at the midline over the narrow parietal.