The traditional clade Insectivora
is a now-abandoned clade because its former members have been shown to be polyphyletic. Both shrews and moles are traditional members.

Unfortunately,
a remnant order, Eulipotyphla, still includes both shrews and moles. The large reptile tree (LRT, 1360 taxa, subset Fig. 4) nests moles, like Talpa, within Carnivora, derived from the mongoose, Herpestes, and the traditional canid ancestor, Prohesperocyon. All these taxa (Fig. 1) have transverse premaxillae and long, sharp canines. Talpa and Prohesperocyon both have a bulbous occiput, gracile zygomatic arch and elongate rostrum. 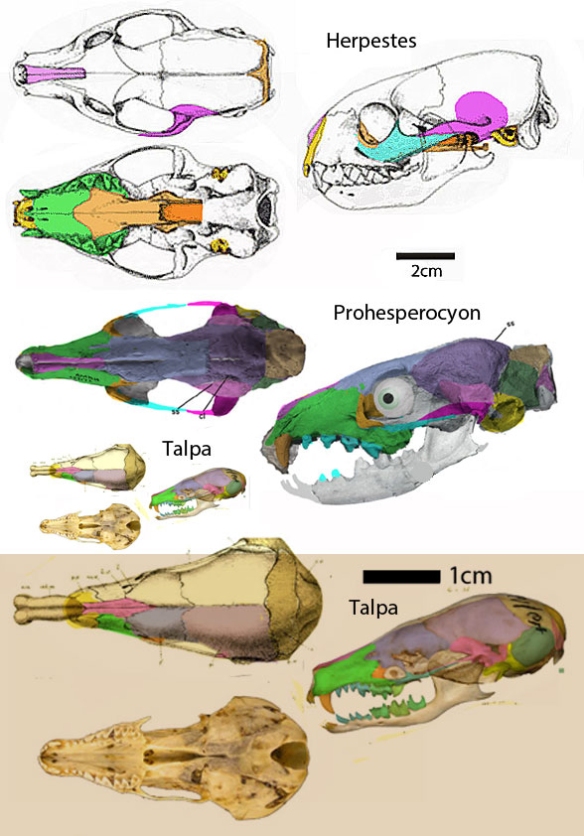 Figure 1. Taxa in the origin and evolution of moles, Herpestes, Prohesperocyon and Talpa.

Uropsilinae is the clade of shrew-moles
Wikipedia reports, “The shrew moles (Uropsilus) are shrew-like members of the mole family of mammals. They share a full zygomatic arch with all other moles, while this arch is completely absent in shrews.” Notice how this author just ‘pulled a Larry Martin‘? A complete arch is a plesiomorphic (basal) trait. That means it is plesiomorphic for shrews, too. Some shrews, like Rhyncholestes (Fig. 3), retain a complete arch. 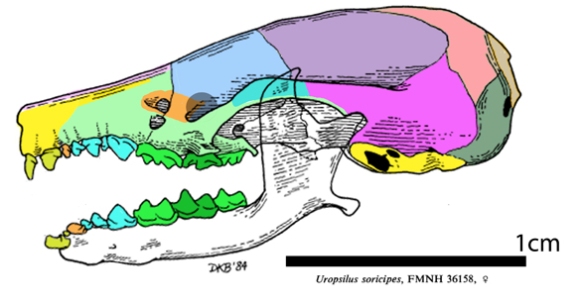 Figure 2. The shrew-mole, Uropsilus, is not related to the mole, Talpa (Carnivora), but is related to the shrew (clade Glires). Note the long premaxilla, large incisors, tiny canine (orange), arched jugal arch. Image from Hoffmann 1984. Despite the overall similarity of this skull to that of Talpa, note the differences in the dentition and various skull bone proportions, all scored for the LRT.

Uropsilus (Milne-Edwards 1871)
is a shrew-mole (Fig. 2) was described by Hoffmann 1984: “These small insectivores are shrew-like in external appearance, but exhibit a mole0like skull and dentition. The tail is long and forefeet are not enlarged, while the zyogmatic arch is complete, and the tympanic bones form an auditory bulla. Thus, this “shrew-mole” lacks skeletal specializations for digging found in more derived moles, and the derived characters of skull and dentition found in shrews.” Not sure what Hoffman was smoking here, but Uropsilus has a shrew skull (Fig. 2) and readily nests with shrews, like the formerly traditional marsupial, Rhyncholestes, in the LRT, apart from moles.

Figure 3. Skull of Rhyncholestes along with in vivo photo. This is the long-nosed shrew-opossum and its skull. This taxon is a sister to Uropsilus, but has a longer snout and more incisors. It does not nest with marsupials in the LRT.

Backstories for today’s players:
Herpestes ichneumon (Linneaus 1758; extant; 48-60cm in length) is the Egyptian mongoose. 9-10 teeth (x4) line the jaws with large carnassials. Derived from a sister to Protictis, Herpestes is a lower, shorter-legged ancestor to Procyon (above) with a relatively shorter rostrum.

Prohesperocyon wilsoni (Wang 1994; Late Eocene, 36 mya) was considered the earliest canid, but here nests between Herpestes, the mongoose, and Talpa the mole. Note the long, pointed skull, expanded occipital and reduced jugal and squamosal. These traits are further emphasized in Talpa (below).

Talpa europaea (Linnaeus 1758, extant) is the extant mole, a small burrowing mammal derived from Herpestes and Prohesperocyon. The large hand, enlarged with a finger-like centralia that extends like a pteroid along the medial axis, is anchored by huge muscles that arise from the anteriorly displaced scapula. The pelvic girdle is fused to an elongate sacrum. The premaxilla is transverse in Talpa and those are large canines.

Figure 4. Subset of the LRT focusing on Carnivora, the basalmost eutherian clade. Talpa is the European mole. Shrews and shrew-moles nest within the clade Glires in the LRT.

Lots of “low hanging fruit” here…
Someone (= lots of biologists/paleontologists) left these mistakes for others (= yours truly) to repair. Should have been done ages ago. Taxon inclusion is once again the solution to traditional taxon exclusion problems.