The genesis for this genus
in the earliest Carboniferous is based on the more derived Silvanerpeton from the Viséan (335 mya). A dense layer of belly scales (not shown en masse), a larger manual digit 5, and a taller ilium, among other traits, distinguish this specimen from Gephyrostegus. A larger manus, ischium and giant caudal transverse processes (ribs) relative to the torso are unique traits among close relatives. Note the lack of ribs in the lumbar area, where large amniote eggs develop before they are laid. The eggs were relatively large based on the greater depth of the ischium. 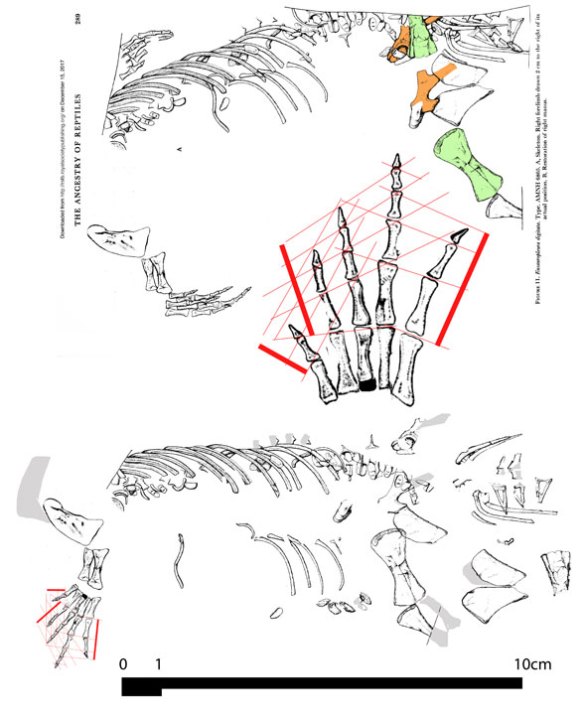 Basal to Eusauropleura
are taxa close to the Reptilomorpha – Lepospondyli split. These include Eucritta and Utegenia (Fig. 2) all derived from the Late Devonian reptilomorph, Tulerpeton. This affirms the primitive state of basalmost reptiles, derived from Devonian tulerpetids. Further affirmation comes from the observation that the central vertebral elements of Eusauropleura “are very thin-walled, forming little more than a husk around the large notochord,” according to Carroll 1970. 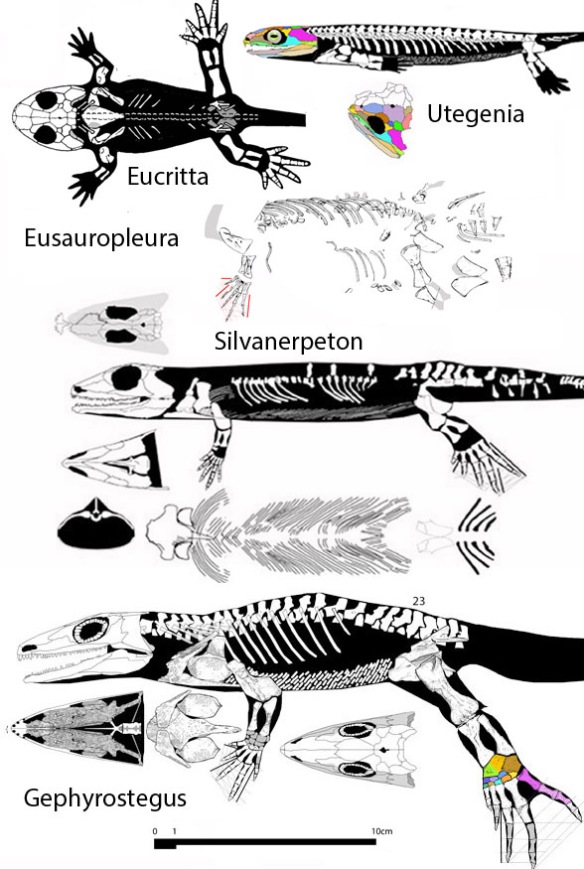 Figure 2. Eusauropleura to scale with ancestral and descendant taxa including Eucritta, Utegenia, Silvanerpeton and Gephyrostegus, the last common ancestor of all reptiles. Note, none of these specimens preserves ossified carpals.

First considered a microsaur
(Cope 1868), then a gephyrostegid (Romer 1930, 1950; Carroll 1970), Eusauropleura was identified as more primitive than Gephyrostegus (Carroll 1970), but still terrestrial, not aquatic and close to the ancestry of reptiles, but not itself a reptile.

So what is a reptile?
As determined here in 2011, there is no list of traditional reptile skeletal traits that upholds the reptile status of Gephyrostegus. There is a new list. Irregardless of skeletal traits, only the nesting of Gephyrostegus as the last common ancestor of all reptiles in the LRT tells us it was laying eggs with an amnion, the ONLY trait needed to determine its reptile status. Silvanerpeton, from the earlier Viséan, was likely also a reptile because phylogenetic descendants of late-surviving Gephyrostegus are also found in coeval Viséan strata. Reptiles are that old. Given that the last common ancestor of Silvanerpeton and Gephyrostegus must also be a late-surviving member of that basalmost reptile radiation, whether the amnion was fully developed or not, something we may never know given the fragility of an amniotic membrane over 300 million years in stone. Earlier workers did not enter Eusauropleura, Silvanerpeton and Gephyrostegus into a wide gamut phylogenetic analysis and so did not recover a last common ancestor status for these amphibian-like reptiles.

Another specimen attributed to Eusauropleura
AMNH 6860 (Moodie 1909, Carroll 1970), is a bit more jumbled, more incomplete and more difficult to reconstruct. A complete ilium with an elongate posterior process is easy to see in this specimen. Such a process provides attachment points for more than one sacral rib, a traditional reptile trait, but this is difficult to determine in the scattered remains of the fossil. And is this really Eusauropleura?

Yet another specimen attributed to Eusauropleura
PU 16815 is an isolated pectoral girdle, bones lacking in the other specimens and therefore not readily comparable.

Scales
According to Carroll 1970, “Scales, both dorsal and ventral, are conspicuous in these specimens [Gephyrostegus and Eusauropleura]. The body was protected by heavy, oblong scales, overlapping to form a chevron pattern, between the pelvic and pectoral girdles. Were they not associated with the skeleton, they would be difficult to distinguish from those of [more primtive] embolomeres. Laterally the scales assume a more oval outline, become thinner, smaller and less extensively overlapping. The dorsal scales are small, thin and round. Where worn, all the scales exhibit a pattern of fine ridges, running parallel with the margins. These form a pattern of concentric ridges in the dorsal scales, similar to that of [more primitive] discosauriscids. Except for the heavier ossification of the dorsal scales, those of Eusauropleura are generally similar to those of Gephyrostegus.”