Berman et al. 2010
brought us a new trematopid amphibian, Fedexia striegeli (Figs. 1-3; CM 76867; late Carboniferous; 300 mya; est. .6m long). Not quite matching the Berman et al. study, the large reptile tree (LRT, 1326 taxa) nests Fedexia at the base of the clade including Tambachia and Ecolsonia. This appear to be due to taxon exclusion

Firsthand observation
initially mistook the exposed teeth for a fern frond. The naris is elongated, covering a majority of the lateral rostrum. The orbit appears to be taller than wide, but when calipers are placed on it, the horizontal and vertical are identical. A small notch appears between the ventral premaxilla and maxilla. The lateral premaxillary teeth are enlarged to fangs. 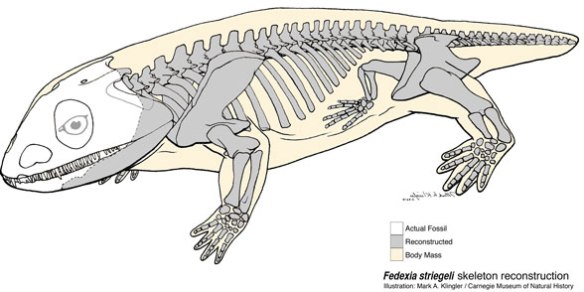 Sister taxa
like Ecolsonia and Tambachia (Fig. 3) are similar in size and overall morphology.

Figure 3. Fedexia to scale alongside sisters Tambachia and Ecolsonia. Note the large nares with a long lacrimal at the ventral margin, The quadratojugal may enclose all three taxa as it does in Ecolsonia.

Figure 4. Subset of the LRT focusing on amphibians including the frog, Rana and the salamander, Andrias. Fedexia nests here with Tambachia and Ecolsonia.