Liu, Samathi and Chanthasit 2018
study for the first time Thaisaurus (Fig. 1), a basal ichthyosaur in the large reptile tree (LRT, 1315 taxa). We first looked at Thaisaurus in April, 2015 here.

The authors report, “Since its first brief description, however, T. chonglakmanii has never been restudied in detail, and its exact stratigraphic and phylogenetic position remained elusive. Here we revisit the well prepared holotype specimen of T. chonglakmanii.  This is the earliest record of Mesozoic marine reptiles, two million years earlier
than the earliest previous record.” The authors do not record an outgroup for the Ichthyosauria. The LRT provides dozens in a lineage going back to Devonian tetrapods. Late surviving Wumengosaurus nests as the basalmost ichthyosaur in the LRT (Fig. 2) and mesosaurs are the sister clade appearing as early as the Early Permian. So that gives plenty of time for ichthyosaurs to diverge from primitive mesosaur/sauropterygians. And we should be finding basal ichthyosaurs throughout the Permian. 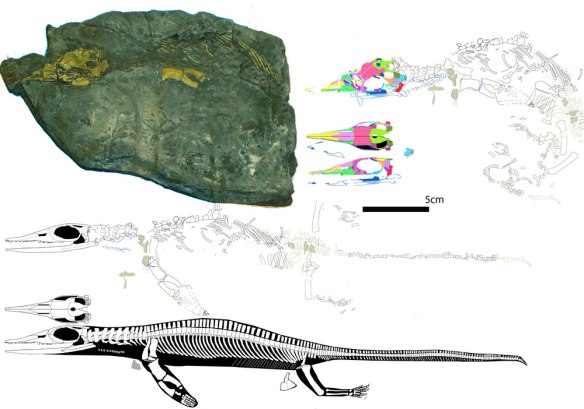 From 2015
Thaisaurus chonglakmanii (Mazin et al. 1991; Early Triassic; Fig. 1.) was considered the most basal ichthyosaur by Maisch (2010). That is largely confirmed in the large reptile tree where Thaisaurus nests between Wumengosaurus and the remainder of the Ichthyosauria (sensu Maisch 2010, Fig. 2).

Nice to see that everyone is in agreement
on the taxonomic nesting of Thaisaurus.

Figure 2. Click to enlarge. The origin of ichthyosaurs and thalattosaurs from basal diapsids and basal mesosaurs. Relationships are rather apparent when seen in this context.

Thaisaurus was a late-survivor in the Early Triassic,
a time in which ichthyosaurs were diversifying rapidly. Or did ichthyosaurs just appear in the fossil record then, having diversified throughout the Permian?