There will be two answers here:
1) phylogenetically; and 2) ontogenetically as Bell et al. 2017 discuss changing ideas regarding the integument of tyrannosauroids.

Tradtional taxon exclusion
has given the Bell et al. team a different ancestry of tyrannosaurs than in the large reptile tree (LRT, 1307 taxa). Even so, Early Cretaceous taxa are the last to preserve feathers or filaments in the large and giant members of this clade.

A few facts before we get started:

Figure 1. Late Cretaceous Tyrannosaurus, which has scales, to scale with Early Cretaceous allosaurid, Yutyrannus, which has feather-like filaments. This is the largest theropod, so far, to have such filaments.

Bell et al. report
“Recent evidence for feathers in theropods has led to speculations that the largest
tyrannosaurids, including Tyrannosaurus rex, were extensively feathered. We describe fossil integument from Tyrannosaurus and other tyrannosaurids (Albertosaurus, Daspletosaurus, Gorgosaurus and Tarbosaurus), confirming that these large-bodied forms possessed scaly, reptilian-like skin. These new findings demonstrate that extensive feather
coverings observed in some early tyrannosauroids were lost by the Albian, basal to Tyrannosauridae. This loss is unrelated to palaeoclimate but possibly tied to the evolution of gigantism, although other mechanisms exist.”

And they conclude,
“Gigantism (i.e. increased body mass) affords greater heat retention: a thermodynamic by-product of the square-cube law and linked to reductions in hair in large modern terrestrial mammals.”

Figure 2. Tyrannosaurus (without feathers) to scale and directly compared to Zhenyuanlong (with feathers). Integument patches shown from Bell et al. 2017. Note the reduction of the forelimbs and hind limbs as tyrannosaurs grow in size phylogenetically. For those who don’t like the LRT phylogeny, this GIF animation shows just how similar tiny Zhenyuanlong and Tyrannosaurus really are.

A modern analogy: small furry hyrax ~ large naked elephant
Just as baby elephants can have a bit more vestigial hair than their parents do, baby giant theropods might have had more vestigial filaments. And considering the small patches of scales found for giant theropods so far, small patches of vestigial filaments might still have been present elsewhere, perhaps trailing the forelimbs, for instance. We just don’t know yet.

Figure 4. The small furry hyrax is in the lineage of the large naked elephant, analogous to small feathery theropods and large naked theropods. The fingers and teeth already show similarities here.

The authors discuss hatchling tyrannosaurs
as they report, “Finally, the presence of epidermal scales in a large adult individual does not rule out the possibility that younger individuals possessed feathers—a developmental switchover that, to our knowledge, would be unprecedented at any rate.” No birds have more feathers as hatchlings than as adults.

What are tyrannosaur scales? And did birds lose their scales?
According to bird studies (Dhouailly 2009) theropod scales may be [phylogenetically] derived from feathers. (Remember chickens and other birds are naked underneath.) Scales and scutes can develop at any place and at any time from naked skin. Consider the ankylosaurs, as an extreme example. Naked and/or furry skin can develop from scales. Consider the scaly tail of the opossum ancestral to the tail of a hamster or lemur, as examples. 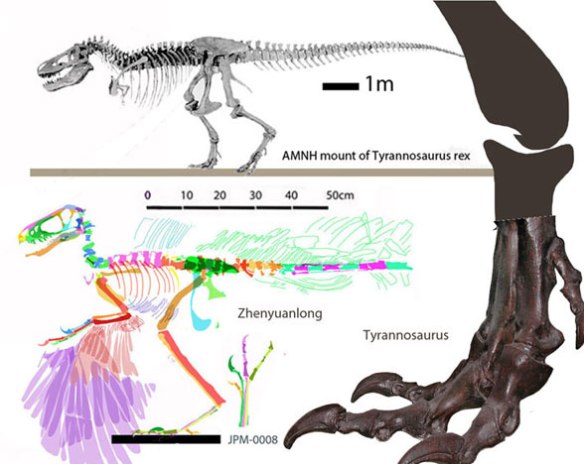 Figure 1. Zhenyuanlong compared to scale with the foot of T-rex and a another overall view of T-rex to a similar overall length.

This topic was inspired by the following video on YouTube:

3 thoughts on “When did T-rex lose its feathers?”