Something  a little strange in the course of mammal evolution here.
The temporal region of rodents (Fig. 1) appears to ‘break the rules’, but on further examination merely bends them.

We’re used to seeing
the orbit separate from the temporal fenestra, as in most reptiles, but it is a little disconcerting to see them confluent, as in most mammals, knowing that the eyeball and temporal muscle share the same opening without division.

In some rodents,
like the capybara (genus: Hydrochoerus) (Fig. 1), the lateral temporal arch (aka: zygomatic arch) drifts/shifts so far forward that it moves anterior to the temporal region and just borders the orbit (or so it seems).

Actually
the temporal jaw muscle continues to dive inside the temporal arch to the coronoid process of the dentary (= mandible). The difference is the temporal muscle in capybaras pulls at an angle over the valley created by the squamosal (Fig. 1, lower right). 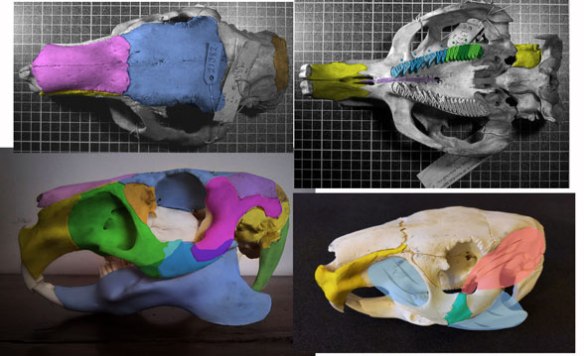 FIgure1. Hydrochoerus the capybara. At lower right, large jaw muscles are illustrated. The temporalis muscle (light red) anchors on the temple and inserts on the coronoid process as usual, just angled much closer to the eyeball to maintain these contacts. In dorsal view the zygomatic arch is located anterior to the temporal region of the skull here.

In other words,
the zygomatic arch (maxilla + jugal + squamosal bar) in the capybara and several other rodents and their allies (Fig. 3) does not extend to the posterior skull, as it does in basal tetrapods and most mammals, including multituberculates (Fig. 3). Even so, the temporalis muscle (Fig. 1, light red) always anchors on the temple and inserts on the coronoid process. In the capybara the temporal muscle inserts much closer to the eyeball.

Rodents have a loose jaw joint
(Fig. 2) that permits the mandible to move freely (not restricted by an axle and shaft as in Carnivora) within a muscular sling to alternately gnaw with incisors in one position, then grind with the molars in another. Primates, including humans, are similar in this regard. The alignment of the teeth can shift because the axis of rotation is loose.

Figure 2. Xianshou animation showing the loose jaw joint permitting both gnawing and grinding. The zygomatic arch is shifted slightly anteriorly here, distinct from sister taxa (Fig. 3). If the jugal is still present, it is located as a vestigial patch on the inner rim of the zygomatic arch, as in sister taxa. This is obviously a highly derived skull and it nests at a highly derived node, contra the present paradigm and despite its early Late Jurassic appearance in the fossil record.

Cox et al. 2012 report,
“The masticatory musculature of rodents has evolved to enable both gnawing at the incisors and chewing at the molars. In particular, the masseter muscle is highly specialised, having extended anteriorly to originate from the rostrum. All living rodents have achieved this masseteric expansion in one of three ways, known as the sciuromorph, hystricomorph and myomorph conditions. Our results show that the morphology of the skull and masticatory muscles have allowed squirrels to specialise as gnawers and guinea pigs as chewers, but that rats are high-performance generalists, which helps explain their overwhelming success as a group.”

Other groups not traditionally associated with rodents,
but nest with rodents in the large reptile tree (LRT, 1281 taxa) include:

Typically the auditory bulla becomes larger
as the zygomatic arch advances forward, thus filling the vacated space below the temples. This happened several times by convergence. I wonder if that was the driving force: improved hearing for predator avoidance and/or prey detection, that made this happen in the following taxa and their kin.

Figure 3. A selection of taxa from figure 1 more or less to scale and in phylogenetic order (pink arrows). The hedgehogs Erinaceus and Echinops are transitional to the higher taxa with a complete arcade of teeth and without. Today, please note the posterior anchor of the squamosal (zygomatic arch).

I wonder if multituberculates are no longer with us
because they could not hear as well, based on their smaller auditory apparatus? Good question…