This post
and the two previous ones here and here were prompted by a YouTube video on Bear-dogs. Today we’ll talk about bears and their place in the cladogram of the Carnivora. Turns out they are not related to dogs (contra Matthews 1930, Wang 1994), so there should be no such thing as a bear-dog (contra Tomiya and Tseng 2016). Taxon exclusion, as usual, is the problem with these earlier, more focused studies. 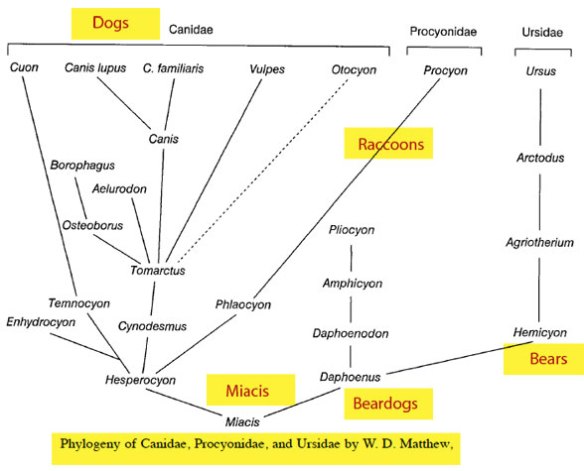 Figure 1. Traditional family tree of dogs, bears and their allies from Matthew 1930 reprinted in Wang 1994. This tree is invalidated when more taxa are added in the LRT.

DNA has it backwards.
Flynn et al. 2005 recovered extant Carnivora relationships, but nested cats and dogs at the base of the clade (Fig. 2). Count the toes. Basal taxa, like weasels, have five toes in contact with the substrate. And which taxa look most like the outgroup arboreal didelphids? Civets and weasels. And where are the civets? They were not included. Ironically, this is an example of DNA matching trait analysis, except Flynn et al. reversed the order, had the cladogram upside-down. Of course, the lack of fossils obscures more precise relationships and omits many key extinct taxa. We looked at problems with DNA cladograms here, here and here. 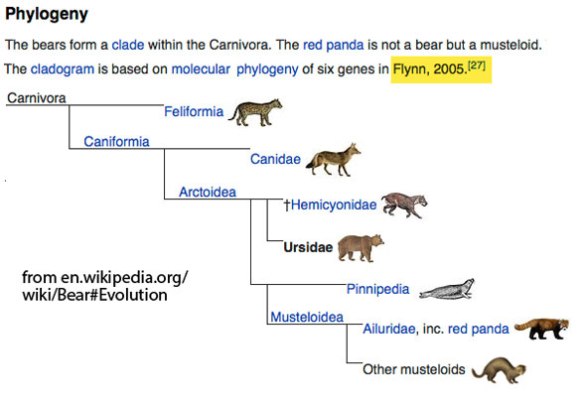 Figure 2. Carnivora based on a molecular phylogeny in Flynn 2005. Compare to same clade in figure 2. This one is upside down by comparison to the LRT. Weasels and raccoons should be more primitive.

By contrast
the large reptile tree (LRT, 1278 taxa; subset Fig. 3) nest cats and dogs as the most highly derived members of the Carnivora. They only have four toes in contact with the substrate and they look different than outgroup didelphids. And they are highly arboreal. Civets (genus: Nandinia) and vulpavids (genus: Vulpavus) nest at the base of the Carnivora in the LRT (Fig. 3). Civet-like arboreal didelphids (genus: Caluromys) are outgroups.

Bears,
like Ursus maritimus (= polar bear; Fig. 4) nest between the weasels (genera: Mustela and Puijila) and the giant weasels (genus: Stylinodon) with teeth that continued growing throughout its lifetime and giant canines that came to resemble rodent-like incisors. The aquatic forms, Palaeonsinopa and seals like Phoca are bear cousins. 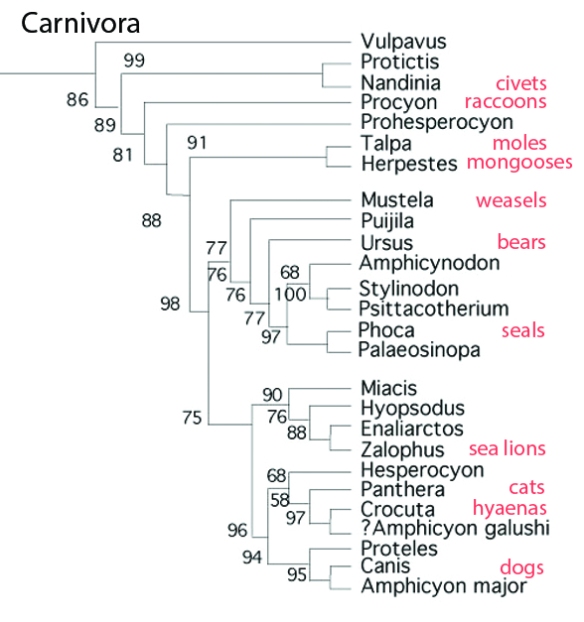 Figure 3. Subset of the LRT focusing on Carnivora, a basal placental mammal clade. Note cats and dogs in derived nodes. Miacis is basal to sea lions, Amphicynodon is basal to stylinodontids.

Remember:
(Don’t trust teeth alone because they change with diet. Always score traits for the entire skull and body whenever possible to get the closest possible relatives from a long list of candidates). 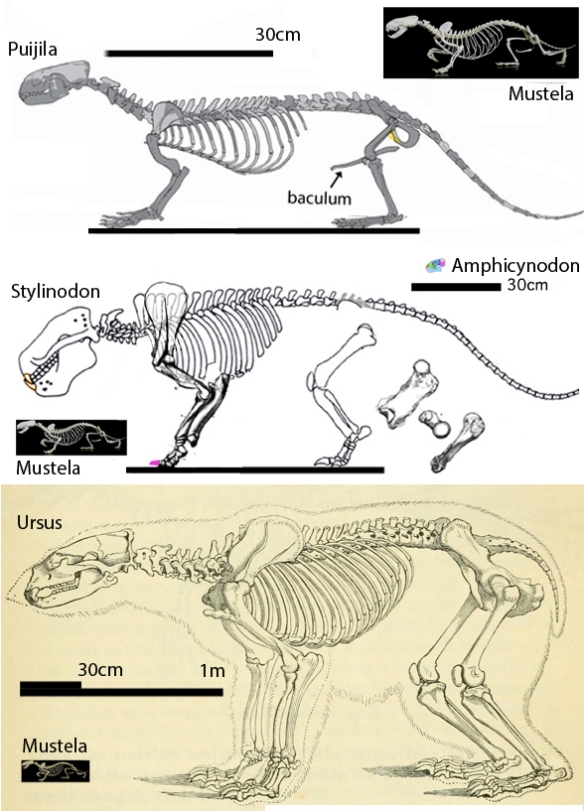 Earlier we looked at another pair of giant weasels, now also allied to bears, the traditionally enigmatic Stylinodon (Fig. 5) and Psittacotherium.

Let’s talk about the traditional origin of bears.
There is a mink-sized early Oligocene taxon known from the front half of a skull, Amphicynodon (Fig. 5; Wang , McKenna and Dashzeveg 2005) that has been the traditional ancestor of bears. In the LRT Amphicynodon nests close to bears, but closer to Stylinodon and Psittacotherium, taxa never tested with Amphicynodon before. 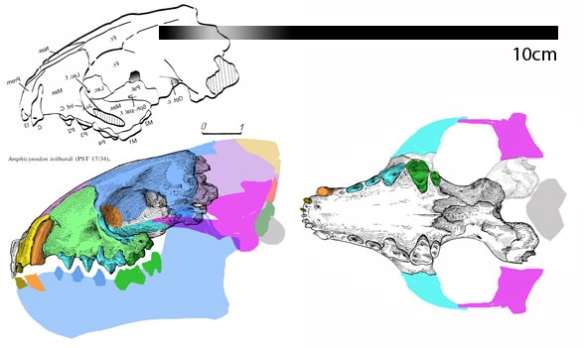 Figure 5. Amphicynodon skull from Wang et al. 2005, restored with colors. Note the similarity to the bear-sized Stylinodon in figure 4, rather than the bear in figure 4.

Earlier the LRT split seals from sea lions. Both arose from separate clades of terrestrial ancestors with a last common ancestor near Herpestes, the mongoose.

2 thoughts on “Bears are giant weasels”