I trusted published drawings
by Luo et al. 2001(Fig. 1) for tiny Hadrocodium and previously nested it with the tiny basalmost mammal, Megazostrodon (Fig. 2). That original drawing turned out to include a few errors. Here I trace and reconstruct Hadrocodium bones using DGS (Fig. 1). I also restored the dorsal skull shape to its invivo convex curve, which realigned the tooth rows with the jaw joint. I also recovered a down-turned premaxilla, relative to the maxilla, not an upturned one, as originally traced.

Figure 1. Hadrocodium skull in DGS tracing and reconstruction, plus the original drawing by Luo et al. 2001. The frontal/parietal hinge was pushed down during taphonomy. Here it is restored to its invivo position, which lines up the teeth with the jaw joint. Two molars nests it with other basal mammals with two molars.

Now
in the large reptile tree (LRT, 1258 taxa, not yet updated) Hadrocodium nests with other not-so-basal mammals, like Ukhaatherium, Morganucodon and Volaticotherium, which we looked at yesterday. Like the latter two, Hadrocodium also has only two upper molars, a gracile zygomatic arch (jugal + squamosal) and other traits in common.

Hadrocodium wui (Luo, Crompton and Sun 2001), is known only from a very tiny skull. Due to its tiny size and lack of four to five molars (Fig. 2) Hadrocodium was originally considered a juvenile basal mammal, but later a tiny adult. Hadrocodium has a relatively larger brain size and more advanced ear structure than Megazostrodon. Hadrocodium nests with other taxa with two molars, Morganucodon and Volaticotherium. 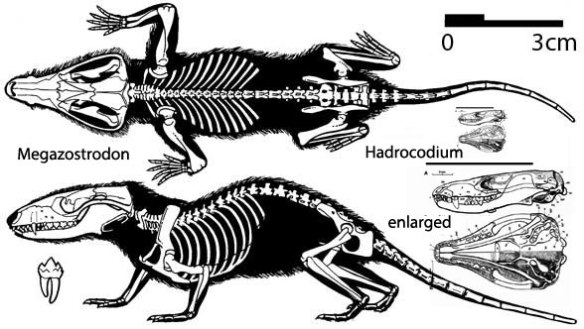 Revisiting basal mammals
is moving some of them around the LRT to nest with more similar sisters. There may be more such changes in the future as data improves. Things are a bit unsettled at present.