Updated March 12, 2019
with a new nesting closer to Sinocalliopteryx.

Porfiri et al. report,
“Megaraptorids are characterized by the formidable development of their manual claws on digits I and II and the transversely compressed and ventrally sharp ungual of the first manual digit. Phylogenetic relationships of megaraptorans have been the focus of recent debate. Megaraptorans have been alternatively interpreted as basal coelurosaurians (Novas,1998), basal tetanurans (Calvo et al., 2004; Smith et al., 2008), and allosauroids closely related with carcharodontosaurids (Smith et al., 2007; Benson et al., 2010; Carrano et al., 2012). However, recent evidence has been presented in favour of their inclusion within Coelurosauria, and possibly as basal members of Tyrannosauroidea (Novas et al., 2013). The [juvenile] skull material conforms a primary source of information for both coelurosaurian and tyrannosauroid features of Megaraptoridae, unavailable in previous studies.”

Figure 1. Megaraptor, Murusraptor and Sinocalliopteryx. See figure 1 for revised restoration of Murusraptor. Not to scale.

Porifi et al. compared the juvenile skull
of Megaraptor to that of Dilong, which they nest (Fig. 4) as a basal tyranosauroid. In the LRT (Fig. 5) Dilong does indeed nest close to Megaraptor, but both nest far from Tyrannosaurus. Those long snouts are a spinosaur trait. 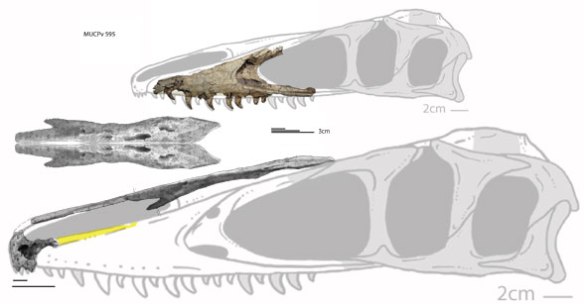 Figure 2. Scale bars seem to be amiss here, but these are the bones and scale bars from the MUCPv 595 specimen of the skull of Megaraptor.

A new Megaraptor skull restoration
is presented below (Fig. 3), based on Xiongguanlong, a sister in the LRT.

Figure 3. Megaraptor skull restoration revised (in blue). As in Xiongguanlong.

Several traditional long-snouted ‘tyrannosauroids’
nest with spinosauroids in the LRT. The two clades converge in many traits and paleontologists have, so far, been willing to accept that tyrannosaur ancestors had long snouts and elaborate rostral crests. Perhaps, someday, the consensus will swing the other way.

Evidently
the Theropoda is a wicked clade to pylogenetically analyze. Workers have been shuffling the nodes trying to figure them out. Taxon exclusion may be the cause of this lack of consensus. The LRT lacks certain taxa. So do other studies. 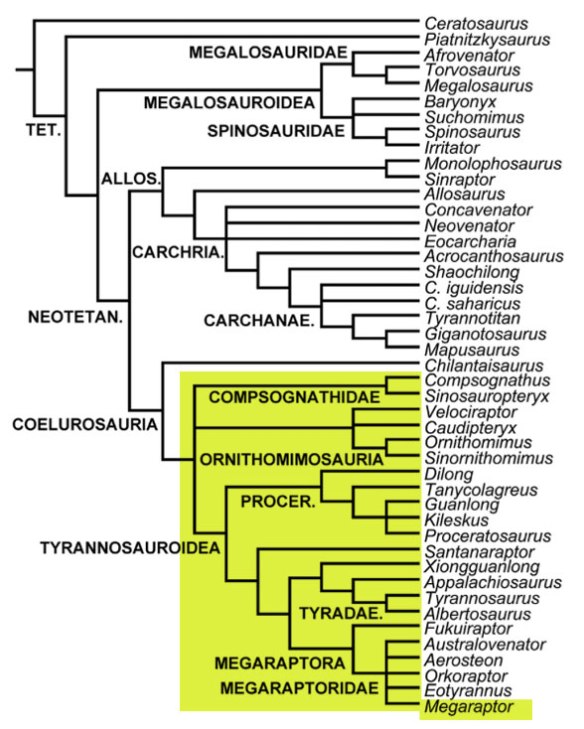 Many branches are similar in many studies. Others are not.

Figure 5. Subset of the LRT focusing on basal theropods. Megaraptor and Murusraptor are highlighted.

Tyrannosauroids never had a long, low skull
in the LRT. They were derived from the the CNJ79 specimen of Compsognathus (yes, it needs a new generic name), which also includes ornithomimids, Fukuivenator, Tianyuraptor, Huaxiagnathus, Zhenyuanlong and traditional tyrannosaurids, like Alioramus.