Scale bar problems
and a lack of reconstructions in the original paper are issues here.

Longrich, Martill and Andres 2018
bring us news of “a diverse pterosaur assemblage from the late Maastrichtian of Morocco that includes not only Azhdarchidae but the youngest known Pteranodontidae and Nyctosauridae. [This] dramatically increases the diversity of Maastrichtian pterosaurs. At least 3 families —Pteranodontidae, Nyctosauridae, and Azhdarchidae — persisted into the late Maastrichtian. These patterns suggest an abrupt mass extinction of pterosaurs at the K-Pg boundary.”

The authors summary starts off with an invalid statement:
“Pterosaurs were winged cousins of the dinosaurs.”  That was invalidated by Peters 2000, 2007 and ignored every since. We looked at that problem earlier here, here and here in a 3-part series testing all candidates. It’s time to realize that no one will ever find pterosaur kin among the dinos. They’ve already been clearly identified among the lepidosaurs.

The authors failed to include the Maastrictian tupuxuarid
found in southern Texas (Fig. 1; TMM 42489-2) and did not consider the Maastrichtian footprints discovered in 1954 and reexamined in 2018 that include two ctenochasmatids we will look at tomorrow. 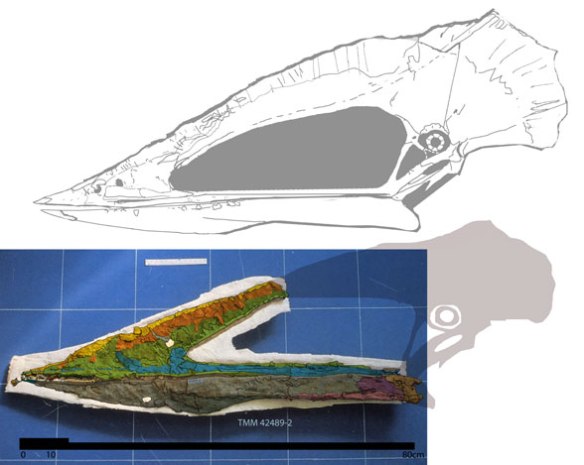 Alcione elainus gen. et sp. nov.
The new 1.5x larger nyctosaurid, Alcione elainus, known from disassociated bones including a shorter radius + ulna, a shorter metacarpal 4, a larger femur, and a tiny sternal complex (identified as a ‘sternum’ in the text) only 40 percent the size of a standard nyctosaur sternal complex (if the scale bars are correct). When placed on a reconstruction of a more complete Nyctosaurus (UNSM 93000; Fig. 2), scaled to the humerus, the result produces a likely flightless nyctosaur. Strangely, the authors called this a “small nyctosaur” even though it is half again larger than UNSM 93000. The authors mislabeled the shorter, straighter scapula as a coracoid, and vice versa.

Figure 2. GIF movie of Nyctosaurus and Alcione showing a likely flightless nyctosaur based on the parts preserved. Three frames change every 5 seconds. The sternum is tiny (assuming the scale bars are correct), the metacarpus and antebrachium are short and the femur is long.

They did not mention the possibility of flightlessness.
They did report, “The abbreviated distal wing elements in Alcione indicate a specialized flight style. The short, robust proportions suggest reduced wingspan and increased wing loading, implying distinct flight mechanics and an ecological shift. Short wings would increase lift-induced drag at low speeds, but reduced wing areas would decrease parasite drag at high speeds, suggesting that Alcione may have been adapted for relatively fast flapping flight compared to other nyctosaurids. Alternatively, reductions in wingspan might represent an adaptation to underwater feeding, i.e., plunge diving of the sort practiced by gannets, tropicbirds, and kingfishers, where smaller wings would reduce drag underwater.”

The reconstructed mandible of Alcione
is narrower than the rostrum in UNSM 93000.

Based on the vestigial fingers of UNSM 93000
and the short metacarpus of the new specimen, Alcione might have been the first pterosaur to walk on metacarpal 4, albeit at the very end of the reign of pterosaurs.

Other flightless pterosaurs include:
the basal azhdarchid form the Solnhofen, Jme-Sos 2428 and the Late Jurassic anurognathid PIN 2585/4 from the Sordes slab. They demonstrate that the distal wing elements reduce first. Thus the reconstruction, based on nyctosaur patterns restores a wing that was not volant.

Longrich, Martill and Andres did find a giant nyctosaur
which they named Barbaridactylus grandis based on a large humerus (Fig. 3). The humerus of the more complete UNSM 93000 specimen is 9.5 cm. By comparison the humerus in Barbaridactylus is 22.5 cm. I’m going to trust the text comment that the ulna + radius are 1.3x longer than the humerus. The scale bars indicate about half that length. Similar problem possible in the scapula/coracoid, according to the nyctosaur bauplan. 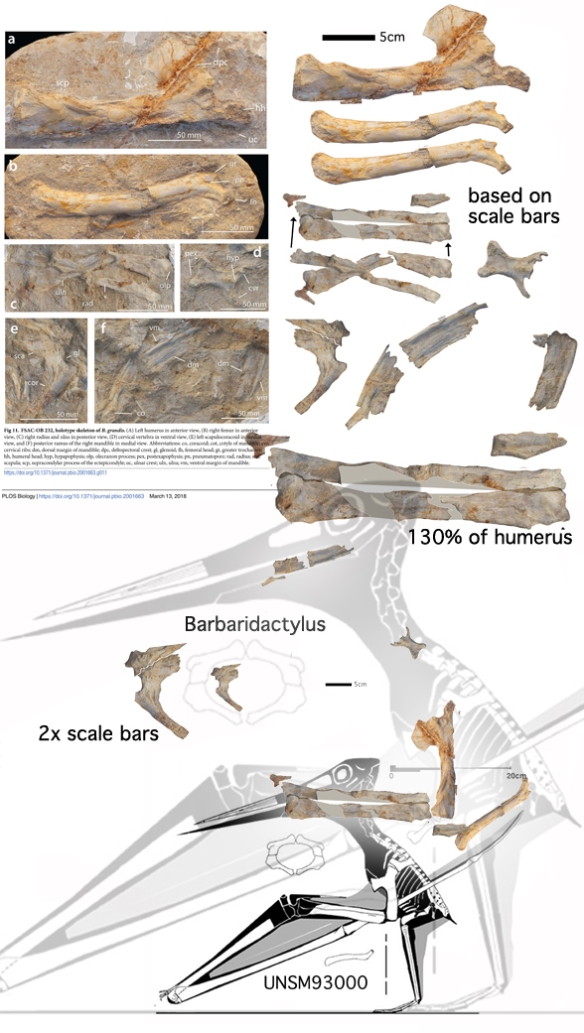 Other giant nyctosaurs
Earlier and here we noted giant nyctosaurs were flying over the Niobrara Sea (midwest North America) based on a large wing finger with unfused extensor tendon process (YPM 2501) and a large nyctosaur pelvis (KUVP 993; misinterpreted by Bennett (1991, 1992) as belonging to a female Pteranodon).

No reconstructions were provided
by Longrich, Martill and Andres 2018. Reconstructions and a nyctosaur blueprint might have helped these paleontologists with firsthand access to the specimens discover the issues they missed.

It’s good to know
more pterosaurs made it to the latest Cretaceous.