Earlier
here and here we looked at the 3-D eggs of Hamipterus, a basal ornithocheirid from Early Cretaceous China. The eggs are scattered in and amongst a wide size/age range of disarticulated, but 3-D fossils. So, according to the authors, the eggs were buried, then bones and eggs were transported by storms, as if bulldozed. No embryos were reported from those eggs. No explanation why the pterosaurs did not fly away in the face of the storm, nor why more sediment wasn’t packed on the buried eggs during the storm.

Today
comes news from this expanding treasure trove site with embryo bones at several stages of development in 16 eggs out of hundreds! That’s good news because full-term embryos (= hatchlings) are identical to parents and eggs keep all the bones from an individual in a neat little package so we can finally put together what Hamipterus looked like.

But that’s not the picture the authors paint.
They said, “some bones lack extensive ossification in potentially late-term embryos, suggesting that hatchlings might have been flightless and less precocious than previously assumed.” Point-by-point:

The authors note and conclude:
“This suggests that the hind limbs have developed more rapidly compared to the forelimbs and might have been functional right after the animal hatched. Thus, newborns were likely to move around but were not able to fly, leading to the hypothesis that Hamipterus might have been less precocious than advocated for flying reptiles in general (6) and probably needed some parental care.”

No. Think again.
Pterosaur mothers carried their eggs inside their bodies until just before hatching. That gives their babies warmth and protection until they are ready to hatch. They could do this because they are lepidosaurs, as phylogenetic analysis AND egg shell thickness and pliability tells us. 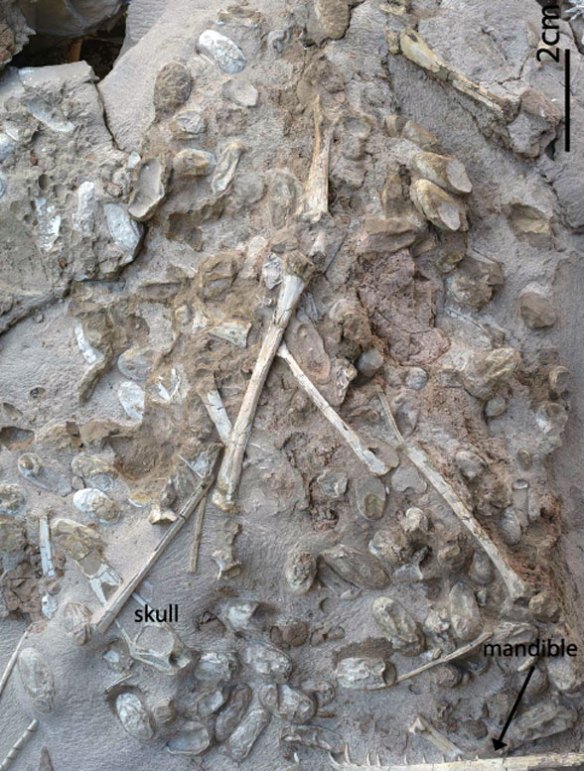 Sedimentology report:
“This sedimentological data, associated with the exceptional quantity of eggs and bones, indicate that events of high energy such as storms have passed over a nesting site, causing the eggs to be moved inside the lake where they floated for a short period of time, becoming concentrated and eventually buried along with disarticulated skeletons.”

Bottom line and biggest problem:
The authors assume the eggs were laid. That’s because they think pterosaurs are archosaurs. Birds and crocs are archosaurs and they lay their eggs at an early stage of fertilization. Lepidosaurs wait to lay their eggs, sometimes until the moment before hatching.

Evidently
the lake burping did not always coincide with the pterosaurs flocking together. But it happened four times to a portion of the flock, perhaps over hundreds of years, and evidently at ‘the back of the room where bad things happen’.