Updated November 17, 2020
with new data nesting the stilt, Himanopterus, with hummingbirds, both descending from Eocene Eocypselus.

Hummingbirds are the tiniest of living birds.
They are famous for hovering with wings beating so rapidly they essentially blur from view. Today hummingbirds live only in the New World.

Prum et al. 2015
based on DNA, nested hummingbirds with swifts and these nested with the nocturnal nightjars. That is the traditional nesting.

In the LRT 2015
based on morphology, hummingbirds nest with the extinct Eocypselus (Fig. 4, 50 mya) and the sea gull, Chroicocephalus (Figs. 1, 3; extant). Mayr 2004 reported on an Old World hummingbird, Eurotrochilus inexpectatus (Fig. 4; 30 mya), from the early Oligocene. Elsewhere on the cladogram, swifts nest with owls and owlets in the large reptile tree (LRT, 1129 taxa then, 1760+ taxa now).

In the LRT 2020
the stilt, Himantopus (Fig. x), nests closer to the hummingibird, Archilochus.

Figure 1. A sea gull hovering. Many birds can do this for short periods, but sea gulls are phylogenetic sisters to hummingbirds, so this is where it all began for hummers.

It should be noted
that swifts do not feed while hovering. They speed through the air snatching insects in flight. On the other hand, gulls do hover (Figs. 1, 2). Gulls appear to hover only in a breeze, which is often present at shorelines. Thus gulls represent the awkward origin of hummingbird hovering, which improved with faster wingbeats. a deeper sternum and a smaller size. Stilts probe mud like hummingbirds probe flowers with their long slender beak.

Fossils tell us
that hummingbird-sized specimens, like Eocypselus (Figs. 3, 4), lived 50 mya and probably originated much earlier. One-sixth the size of the small gull, like Hydrocoloeus (Figs. 2, 3), Eocypselus had a relatively short, small beak and shorter legs, though still longer than the wings.

Figure 3. Chroicocephalus, the smaller Hydrocoloeus (the smallest living gull), the much smaller Eocypselus and the ruby-throated hummingbird, Archilochus to scale.

Of course, small size is key to hummingbird evolution.
At this point, I’m not aware of any gulls smaller than Hydrocoloeus, whether extant or in the fossil record. Stilts are taller, but that is due to those extreme legs and feet.

Figure 4. Eocypselus from 50 mya, Eurotrochilus, from 30 mya and Archilochus, the extant ruby-throated hummingbird to scale.

The fossil Eutrochilus
(Fig. 4, Mayr 2004) bridges the time gap between Eocypselus and extant hummingbirds and would appear to be a complete and fully realized hummingbird itself, living some 30 mya, while originating much earlier. Eocypselus (Fig. was not much different in size or morphology. 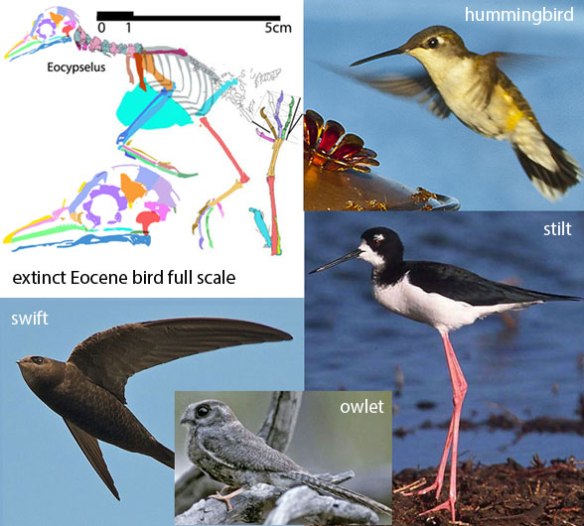 Old World vs. New World
So, based on Eutrochilus, hummingbirds used to be in Europe. Now they are restricted to the New World. Why? There is a long list of hummingbird eaters online here. Something killed European hummingbirds in the Old World.