Codorniú et al. 2017.
bring us detailed images of a wonderful Pterodaustro embryo (MIC-V246, Early Cretaceous; Chiappe et al. 2004) we’ve seen before. Here (Figs. 1–3) we’ll take a closer look at the fossil itself using DGS to untangle it. This is the same embryo first described by Chiappe et al. 13 years ago. Why did it take so long to bring out these details? There’s nothing really new here, no revision to their original description.

Figure 1. Pterodaustro embryo from Codorniú et al. with DGS color overlays to graphically segregate bones from one another. Compare original reconstruction here to that in Figure 3.  Note the broken tibiae. Look how much better color over a photo works than pen and ink.

What Codorniú et al identified as

Parts missing from the Codorniú et al. tracing, but recovered using DGS include

Figure 3. Same as in figure 1 with elements segregated. Just a little bit of eggshell is preserved and it is very thin.

Digital Graphic Segregation (DGS)
is the perfect tool to interpret a fossil such as this. Embryos are encased in eggshell. That means every bone is retained in a small area, undisturbed by invaders or currents. Most embryos are going to be articulated, barring violent shaking, which could happen if the egg was tumbled and/or dropped. Some bones will just barely appear below others.

Try DGS yourself.
First color the bones that are easy to identify. Segregate the wings from other skeletal elements. Then color in all the remaining bones, including those that barely appear below other elements. Finally, lift your colors to another file and push them around to create a reconstruction. Check your work for errors and repeat. 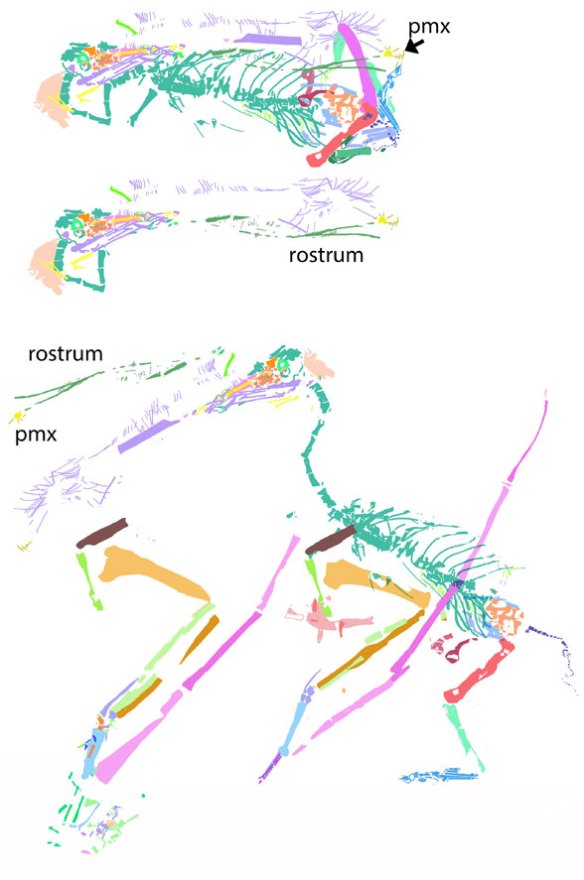 Figure 4. Rough reconstruction using color tracings. Note the elongate jaws and small eye, documenting isometric growth in this pterosaur, as in all others where this can be seen. Note the relatively short tibia. This could be longer, but pars are hidden by the feet and other bones.

The thin egg shell
is similar to those in lepidosaurs because pterosaurs are lepidosaurs. As lepidosaurs mothers can carry their eggs until just before hatching, taking advantage of her warmth and her ability to avoid predators. Please ignore hypotheses that suggest pterosaurs buried their eggs. No fragile hatchling wants to dig out of a deep steaming pile of wet, rotting leaves filled with insects and centipedes. They’re not like husky little sea turtles. Baby pterosaurs want to dry out, open up their tiny wings and fly!

At one-eigth the size of a typical adult (which also vary in size)
embryo Pterodaustro was similar in proportions, but with shorter tibiae, smaller feet, more gracile jaws and other minor differences. With such proportions, there is nothing to prevent hatchling Pterodaustro from flying. 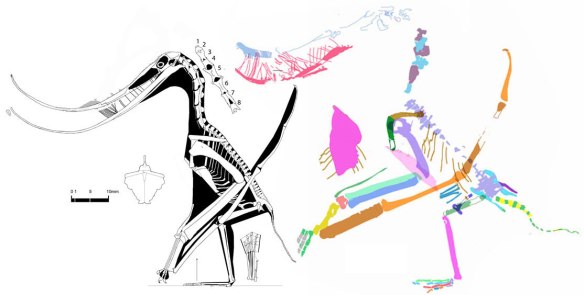 Bone fusion patterns in pterosaurs
Codorniú et al. discuss the lack of scapulacoracoid (s/c) bone fusion in the embryo and considered that an ontogenetic trait. A long time ago, bone fusion was phylogenetically mapped on the pterosaur cladogram. No current embryos have s/c bone fusion, but then neither do any of their adults or sisters. What we need is to find an embryo of a pterosaur genus with a fused s/c as an adult. We have not found one yet. As lepidosaurs, pterosaurs follow lepidosaur bone fusion patterns (Maisano 2002), which are phylogenetic, not ontogenetic. Fused bones keep growing. So do unfused bones into adulthood.

It would be great
if this embryo finally puts to rest the invalid hypothesis of allometric growth in pterosaurs promoted by Bennett and many Bennett followers who considered small, short rostrum, large-eyed Solnhofen pterosaurs the juveniles of larger, longer-snouted specimens. Zhejiangopterus and Pterodaustro growth series provide further strong evidence against the invalid allometric growth hypothesis. Pterosaur workers: GET OVER IT! IT’S WRONG!