Updated June 23, 2017 with the removal of Phlegethontia after taxon additions attracted that taxon to the Aïstopoda, where it traditionally nests.

Updated March 26, 2019 with the addition of taxa and a revision of scores that moved Deltaherpeton to the base of the Collosteidae.

I asked for the challenge.
Dr. David Marjanović (DM) responded. He thought the traditional collosteids should nest together, as they do in Marjanović and Laurin 2017. By contrast, in the large reptile tree (LRT, 1012 taxa) only two nest together. Dr. David Marjanović also did not like Colosteus and kin nesting between Osteolepis and Panderichthys. Rather, Marjanović and Laurin 2017 reported, “Colosteidae is consistently found in a position one node more rootward than Baphetoidea and one node more crownward than Crassigyrinus.” In the Marjanović and Laurin study, relatives of Baphetes include Spathicephalus, Eucritta and Megalocephalus and Crassigyrinus nests between the collosteids and Tulerpeton. The LRT does not support this topology. 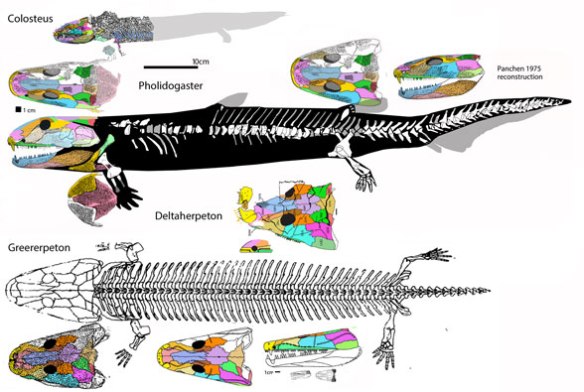 Let’s test to see
if this list is just a Larry Martin list of a few traits that are overwhelmed by other synapomorphies in the LRT. And at the same time, let’s see if these few traits have a wider, but overlooked, distribution and to see if they are valid for every included taxon.

Premaxilla with (lateral) fang pair
is indeed present in the four named taxa, if only barely in Deltaherpeton. Overlooked, perhaps, the lateral premaxillary tooth is also the largest in Acanthostega, Ventastega, Pederpes, Sclerocephalus, Ichthyostega among taxa related to traditional colosteids. More on premaxillary fangs below. 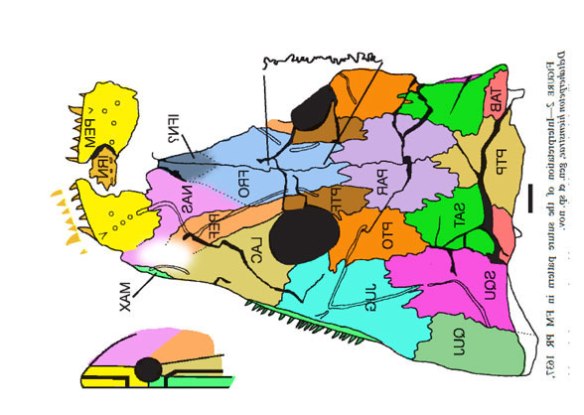 Figure 3. Drawing of Deltaherpeton sutures in Bolt and Lombard 2010 and colorized here. Note the lack of data around the naris (white glow).

Collosteid traits 3-5 (above)
include the elongate exomeckelian fenestra and the two lateral lines (Fig. 3) are difficult to see or not see in some taxa. Note in the labeled image of Deltaherpeton by Bolt and Lombard 2010 (Fig. 3). Even they were unable to draw the naris and its surrounding lateral lines (white glow), but provided a diagram (Fig. 3) on another figure. 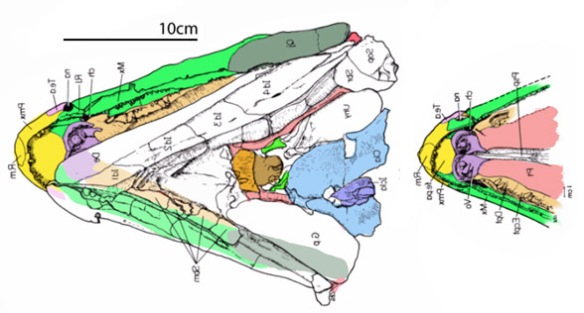 Figure 4. Panderichthys palates from Vorobyeva and Schultze 1991. Note the lateral line below the naris is not continuous, contra Bolt and Lombard.

Two taxa separate Greererpeton and Pholidogaster in the LRT:
Panderichthys and Tiktaalik. Both lack the lateral premaxillary fang. Notably and despite their antiquity, both are derived and distinct from related taxa in having a very flat skull with orbits close to the midline. All marginal teeth are relatively tiny, which is also distinct from related taxa. Apparently when the skull flattened in these two the lateral premaxillary fangs shrank. Perhaps we should look for them in undiscovered basal taxa, probably originating n the early Late Devonian and lasting who knows how long. 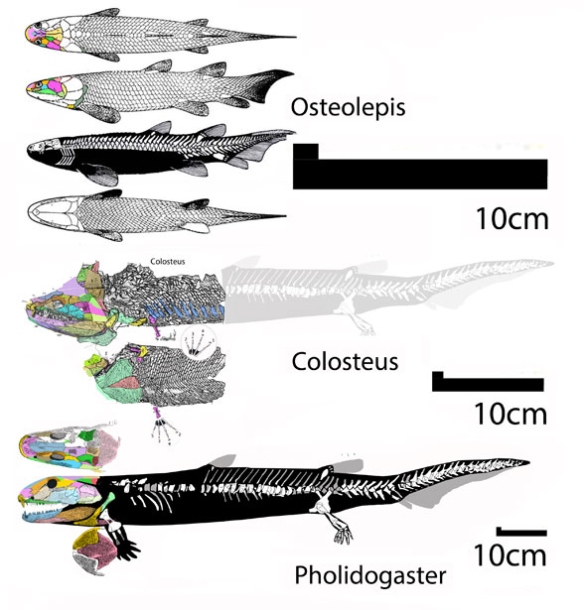 Figure 6. Colosteus relatives according to the LRT scaled to a common skull length. Their sizes actually vary quite a bit, as noted by the different scale bars. Only Pholidogaster and Colosteus are taxa in common with traditional colosteid lists.

In the large reptile tree
(subset Fig. 3) flat Greererpeton nests with other flat taxa like Spathicephalus, Trimerorhachis and Gerrothorax and  Ossinodus. Deltaherpeton nests basal to the collosteids. Despite their readily apparent differences no other taxa in the LRT share as many traits with clade members. And these three are the few representatives of a radiation covering about 60 million years.

The taphonomic crushing of the Deltaherpeton skull suggests it was wider than it was. Finding the palate by excavating from the other side of the matrix would provide precise data.

Did temnospondyls return the water?
Or never leave it? Did tetrapods develop fingers and toes more than once? Did basal tetrapods develop the ability to raise their bellies off the substrate more than once? The LRT provides provisional answers to these questions (Fig. 7). Convergence is apparent here. The LRT collosteids are separated from start to finish by about 60 million years, so changes can be expected.

Synapomorphies
Rather than pulling a Larry Martin, I did not list the few or many traits shared by Collosteus relatives in the LRT. Those can be gleaned from the matrix and most certainly will find convergences elsewhere on the cladogram. Remember, its not just one or a dozen traits that nest taxa as a clade, but the suite of traits that can really only be recovered by software like PAUP.

As to Dr. Marjanović’s challenge:
The traditional list of collosteids certainly does fall into a much narrow spectrum of sizes (Fig. 1), as opposed to the LRT list of Collosteus relatives (Fig. 6). And I did reexamine several issues and red flags. Some scores were revised. Deltaherpeton shifted two nodes and I think I understand it much better now. The list of classic collosteid traits is not found in all members and some traits extend to other clades. Finally, the phylogenetic distance between classic collosteids is not far from each other in the LRT, and in both studies both collosteid clades nest toward the base of the Tetrapoda. The details will work themselves out with further study on both sides. All interpretations are provisional, especially in basal tetrapods given their lateral lines that sometimes look like sutures and both camouflaged by a maze of skull texture.

As a suggestion for the future:
if colleagues would colorize their skull photos, paying attention to broken pieces and parts that just barely peek out from overlying material, that would go a long way toward improving the present system of either just showing the specimen or creating a freehand outline of the specimen, or just labeling bones with abbreviations and arrows without noting sutures.

References
Marjanović D and Laurin M 2017. Reevaluation of the largest published morphological data matrix for phylogenetic analysis of Paleozoic limbed vertebrates. PeerJPrePrints (not peer-reviewed).
Vorobyeva EI and Schultze H-P 1991. Description and systematics of panderichthyid fishes with comments on their relationship to tetrapods, in Schultze and Trueb (eds.), Origins of the Higher Groups of Tetrapods Comstock, pp 68-109.