Figure 1. Flattened Trimerorhachis was considered a dvinosaurian temnospondyl. Here both Trimerorhachis and Dvinosaurus nest low on the basal tetrapod tree, close to the fin/finger transition, not within the Temnospondyli. Both are late survivors of a Devonian radiation.

Wikipedia reports:
“Trimerorhachis (Early Permian, (Cope 1878, Case 1935, Schoch 2013; up to 1m in length) is an extinct genus of dvinosaurian temnospondyl within the family Trimerorhachidae. The trunk is long and the limbs are relatively short. Many bones are poorly ossified, indicating that Trimerorhachis was poorly suited for movement on land. The presence of a branchial apparatus indicates that Trimerorhachis had external gills in life. The body of Trimerorhachis is also completely covered by small and very thin osteoderms, which overlap and can be up to 20 layers thick. The scales were more similar to fish scales than they were to reptile scales, according to Colbert 1955. However, Olson 1979 disputed that interpretation. Specimens are often preserved as masses of bones that are mixed together and densely packed in slabs of rock”

Figure 2. Trimerorhachis forelimb and hind limb in situ and reconstructed. Pawley 1979 did not report metacarpals or a pubis. It is possible and perhaps likely that only 4 metacarpals were present along with two phalanges, but its worth exploring all possibilities.

As a late (Early Permian) survivor of a Late Devonian radiation
Trimerorhachis evolved by convergence certain traits found in other more derived tetrapods, like a longer femur and open palate (narrow, bowed pterygoids). Testing all possibilities while minimizing assumptions is the most valuable benefit of a large gamut phylogenetic analysis conducted by unbiased software. Workers used to eyeball specimens in the pre-computer days. 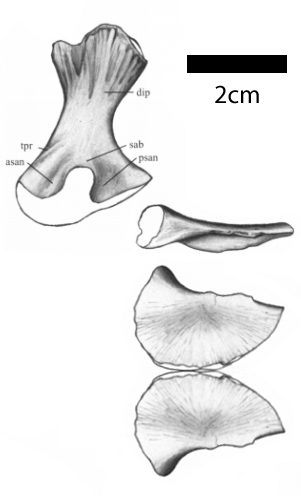 Figure 3. Trimerorhachis pelvis. The pubis is not ossified here, according to Pawley 1979, but see Fig. 1.

Like other workers,
Pawley 1979 considered Trimerorhachis close to Dvinosaurus (Fig. 7) and both thought to be derived from the basal temnospondyl Balanerpeton and Dendrerpeton. The large reptile tree (LRT) nests both taxa at the base of the Lepodpondyli, not closely related to Trimerorhachis and distinct from Temnospondyli. Pawley supports the hypothesis that aquatic ‘temnospondyls,’ like Trimerorhachis, had terrestrial ancestors. By contrast, the LRT nests Trimerorhachis with weak-limbed taxa more primitive than any temnospondyl.

Additionally
the LRT nests Batrachosaurus and Gerrothorax in the Dvinosaurus / Trimerorhachis clade. This clade features horizontally opposed dorsal ribs and an equally flattened skull. Another flattened taxon, Ossinodus, is closely related. I have not seen limb material for any of these taxa. Acanthostega is the closest taxon that preserves limbs. 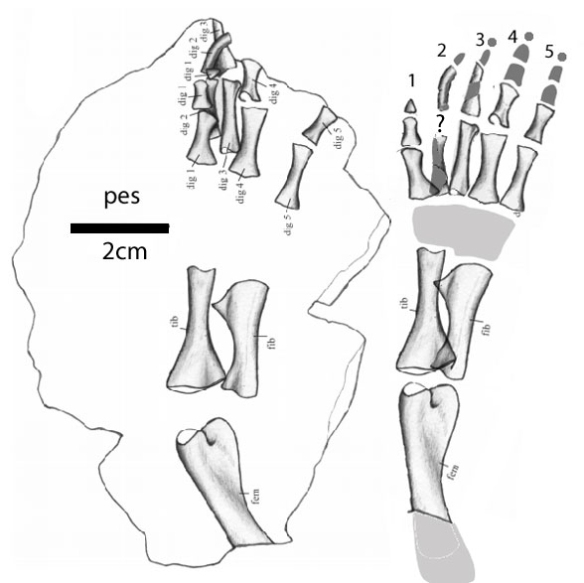 Pawley 1979 noted,
“The vast majority of the [Trimerorhachis] specimens consists of ornamental cranial and pectoral girdle bones, intercentra, and larger elements of the appendicular skeleton. Neural arches, pleurocentra, ribs and distal limb elements are rare.” No sacrals were found by Pawley. No dorsal ribs had uncinate processes (like those in Ichthyostega and Eryops). The chevrons were long and tapered distally (creating a fin?). The interclavicle was diamond-shaped with a longer anterior portion.

The humerus
(Fig. 5) was  L-shaped and the degree of torsion varied between specimens from 45º to 90º. The distal end always exhibited a low degree of ossification. 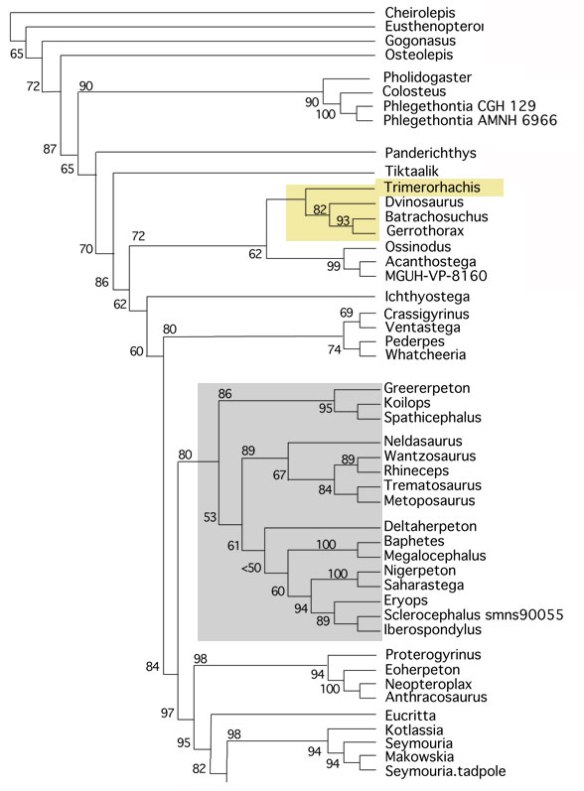 Pawley considered
Trimerorhachis a secondarily adapted aquatic temnospondyl. All workers have noted the wide open palate vacuities that characterize most, but not all members of the Temnospondyli. By contrast, the LRT nests Trimerorhachis with taxa that had not yet left the water completely and shared a flat morphology with Tiktaalik and Panderichthys.

This is the second time
elongate limbs and digits have appeared by convergence in basal tetrapods. Earlier Pholidogaster and kin provided the first exceptions to the rule. Note that all known specimens of Trimerorhachis are Early Permian, some tens of millions of years later than the Late Devonian radiation of that clade. The Ichthyostega line is the one that ultimately produced crown Tetrapoda via a sister to Eucritta.

FIgure 7. Dvinosaurus nests with Trimerorhachis and also has ceratobranchial (gill) bones. The loss of the intertemoral is shown here in light green merging to the postorbital in orange.

If these nestings are not correct
and Trimerorhachis ultimately nests higher on the basal tetrapod tree, then we’re witnessing massive convergence of another sort, convergence that allies Trimerorhachis with tetrapods at the fin/finger transition. I’d like to see limbs for Gerrothorax or any other plagiosaur, if available.

Figure 8. Ossinodus is a close relative of Trimerorhachis in the LRT.

By the way, I find this fascinating…
week after week, far and away the most popular page(s) on this blog continue to be on the origin of bats.

2 thoughts on “Trimerorhachis: a late survivor of the fin/finger transition?”