Perhaps one of the most difficult skulls
in all of the Tetrapoda is Brachydectes newberryi ((Wellstead 1991; Latest Carboniferous, Fig. 1). Many bones are in their standard positions. However, the bones posterior to the orbit have moved around, fused or become lost. That’s where the trouble begins. 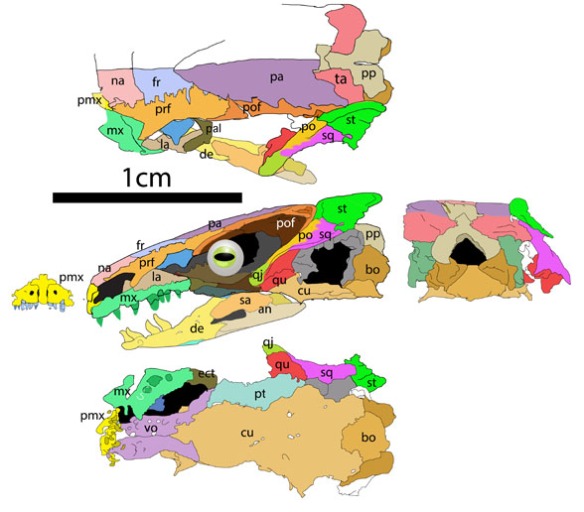 Figure 1. Brachydectes newberryi has some difficult to identify bones just aft of the orbit due to fusion and reduction. Brachydectes (Laysorophus tricarinatus) elongatus (Fig. 2) provides Rosetta Stone clues as to what is happening in this clade. Note the tabulars may be more of a square shape, as Pardo and Anderson drew, but did not identify as such.

Finding data for
Brachydectes elongatus (formerly Lysorophus tricarinatus; Cope 1877, Carroll and Gaskill  1978, Wellstead 1991; Permian, 250 mya; AMNH 6172 ) provides many needed clues as to the identity of the mystery bones.  The data comes from Carroll and Gaskill 1978 and Wellstead 1991. Earlier hypotheses included errors that I want to correct now. Based on phylogenetic bracketing these taxa nest with the caecilians Eocaecilia and Dermophis all derived from elongate microsaurs close to Archerontiscus, Oestocephalus, Adelogyrinus, Adelospondylus and Microbrachis in the large reptile tree (LRT). Unfotunatey, the latter taxa do not reduce the cheek and temple elements. So they were of little help.

As you can see
in figure 2, most of the skull roofing bones and anterior skull bones of Brachydectes elongatus are in their standard spots and are therefore uncontroversial. So let’s nail down the rest of the bones with a parsimony check.

Figure 3. Brachydectes species compared to scale and not to scale. Size alone might warrant generic distinction.

Bones may fuse, drift and change shape, but their connections to other bones often remain to help identify them using phylogenetic bracketing. Of course that requires a valid phylogenetic framework, one that minimizes taxon exclusion problems. The tabulars do not trade places with the postparietals in this hypothesis. The tabulars maintain their original places, lateral to the fused postparietals, bones which fuse by convergence in other taxa. Perhaps the concept of an autapomorphic oversized supraoccipittal was the source of earlier errors.

It’s interesting
that the opisthotics are posteriorly covered by the exoccipitals. That usually does not happen in most tetrapods, but is further emphasized in the caecilians, Eocaecilia and Dermophis. In competing candidate taxa Rhynchonkos, Batropetes and Microrator, a different pattern is present with the postparietals descending to cover large portions of the occiput and the tabulars are fused or absent.

Wellstead (1991) and perhaps others
made Brachydectes elongatus and Brachydectes newberryi congeneric, but I see enough differences here to warrant separate genera.

Pardo and Anderson 2016 reported,
“Contra the proposals of some workers, we find no evidence of expected lissamphibian synapomorphies in the skull morphology in Brachydectes newberryi, and instead recognize a number of derived amniote characteristics within the braincase and suspensorium.

Our study reveals similarities between the braincase of Brachydectes and brachystelechid recumbirostrans, corroborating prior work suggesting a close relationship between these taxa.”

Pardo and Anderson freehand
a Brachydectes newberryi skull reconstruction to supplement their CT scans, but do not label the bones in the drawing. Present are paired bones posterior to the parietals and a single median bone posterior to those. Based on their text, the bones posterior to the parietals are identified as post parietals, “as in the majority of early tetrapods.’ Unfortunately, sister taxa among the microsaurs do not have a large supraoccipital. So this bone has to be reconsidered as a post parietal, which all related taxa have arching over the foramen magnum. Pardo and Anderson do not mention supratemporals, but all sister taxa in the LRT have them.

Recumbirostra
according to Wikipedia, are lepospondyl amphibians that include a large number of microsaurs. Of course, those are not derived amniotes. The LRT nests Brachydectes within the Microsauria (which is not a paraphyletic group here). The phylogenetic topology of Recumbirostrans recovered by Glienke (2012) do not create the same topology in the LRT, perhaps due to taxon exclusion. Glienke recovers Eocaecilia close to Rhynchonkos (in the absence of Adelospondyli). In both studies Microbrachis is basal.

The process of discovery
is often the process of correcting errors. And, as you can see, I’m glad to do so when errors are detected, whether out there or in here. Apologies for earlier errors. We’re all learning and helping each other to learn here.

4 thoughts on “Correcting mistakes on Brachydectes”