This latest nesting
of the former basal tetrapod, Tulerpeton (Fig. 2), as a Devonian transitional taxon leading to the Amphibia, the Reptilia and the Seymouriamorpha in the large reptile tree (1134 taxa) was both anticipated (Fig. 1) and welcome.

As you may recall…
Middle Devonian tetrapod trackways (preceding and coeval with the basal bony fish Cheirolepis and the lobe fins Eusthenopteron and Osteolepis) seemed anachronistic when first announced. But it’s all coming together now. And this new nesting adds precious time for evolution to produce the variety of amphibian-like reptiles present in the Viséan, still awaiting consensus confirmation of their reptilian status.

Figure 1. The nesting of Tulerpeton in the Latest Devonian, at the base of the Lepidosauromorpha. This taxon was added to this graphic that was published online in August 2016.

According to Wikipedia
Tulerpeton curtum (Lebedev 1984, Fammenian, Latest Devonian, 365 mya; Fig. 1) is “one of the first true tetrapods to have arisen.” It was distinct from less derived Acanthostega and Ichthyostega by a strengthened limb structure. It was also half to an eighth the size of these basal tetrapods. A fragmented skull is known for Tulerpeton, but the only fragment I’ve seen is a vague round premaxilla on small reconstructions. Both the manus and pes have 6 digits, all provided with clawed unguals. (NOTE ADDED MARCH 6, 2017: The pes has only five digits after a fresh reconstruction) 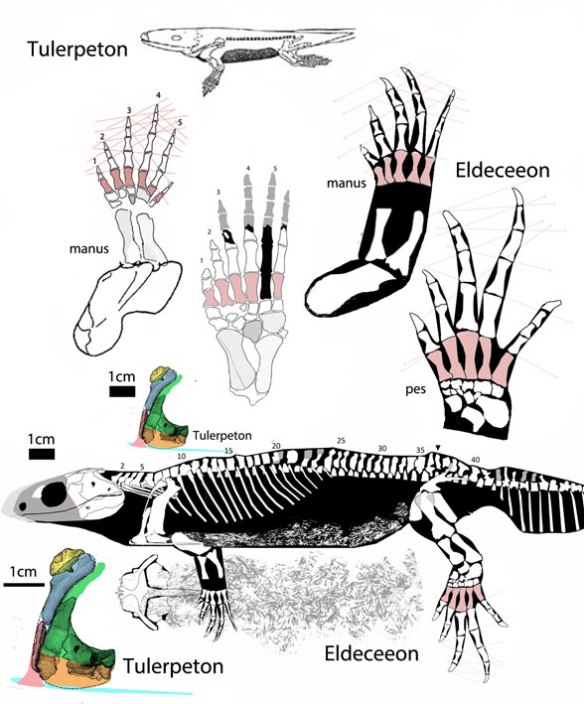 FIgure 2. Tulerpeton compared to similarly-sized Eldeceeon. The loss of one digit in the manus and pes occurred between the Fammenian and Viséan.

Tulerpeton lived in shallow marine waters.
Little is known of this Eldeceeon-sized specimen, but the limbs and pectoral girdle are fairly well preserved. And these were enough to nest it between Ichthyostega and Eucritta among 1133 taxa in the LRT.

Phylogenetic analysis
originally placed Tulerpeton near the base of reptilomorphs, like Proterogyrinus and Eoherpeton. Later workers nested it as a more basal member of the Tetrapoda, between Acanthostega and Greererpeton.

Here
those long, clawed fingers and toes, and the individual proportions of the metapodials and phalanges nested Tulerpeton between Ichthyostega and Eucritta in the LRT.

Major studies do not yet recognize the reptile status
of Gephyrostegus. Hopefully someone will add them and Eldeceeon to a future taxon list to confirm or refute the present findings.

3 thoughts on “Tulerpeton: transitional from Ichthyostega to Eucritta”