Everyone knows that turtles are supposed to be ‘anapsids’.
In other words, they aren’t supposed to have temporal fenestrae. However, many extant taxa, like the box turtle, Terrapene, have such extensive posttemporal fenestrae that the entire posterior half of the skull can be greatly eroded as it is refilled with large jaw muscles. 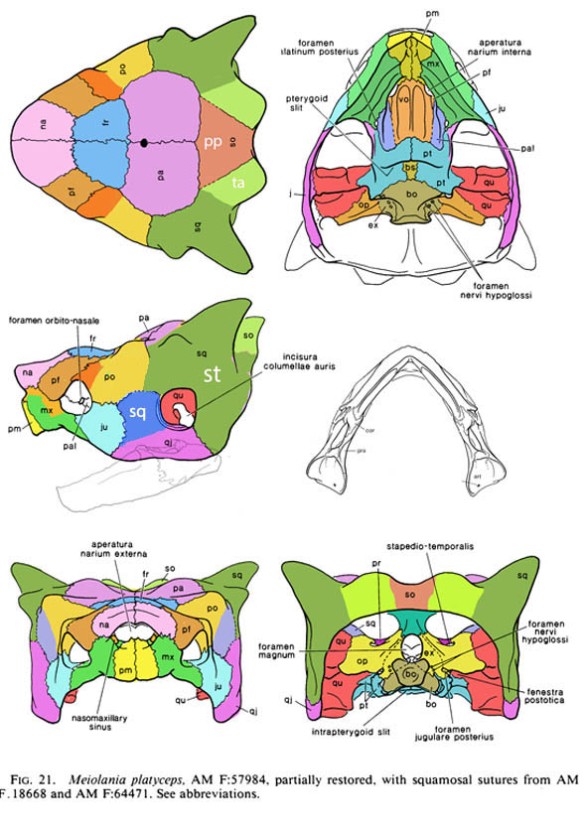 Figure 1. Meiolania has a lateral temporal fenestra created by more bone encircling the tympanum (ear drum) at the quadrate. It could be that the top of the qj is actually the fused sq.

Sometimes more bone makes a fenestra
Earlier we looked at Meiolania a basal turtle with an unusual lateral temporal fenestra created by MORE BONE that encircled the eardrum and quadrate. 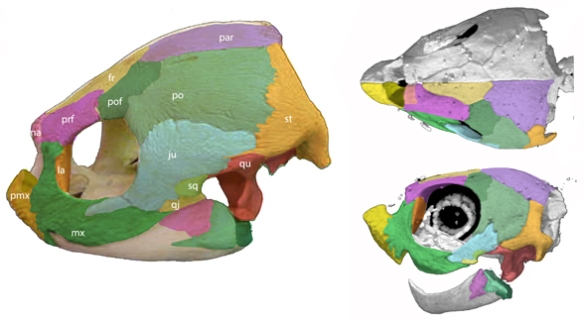 Figure 1. Dermochelys, the leatherback turtle, has a lateral temporal fenestra, a product of bone reduction between the jugal and squamosal + quadrate. Adult at left, juvenile at right, not to scale. The elongate premaxilla is convergent with soft-shell turtles. Note the ontogenetic changes here. Pretty remarkable.

It’s interesting
to see the ontogenetic changes that take place in the skull bones of the juvenile Dermochelys as it matures. The lateral temporal fenestra appears to enlarge with age. Other bones change their shape as the turtle matures. 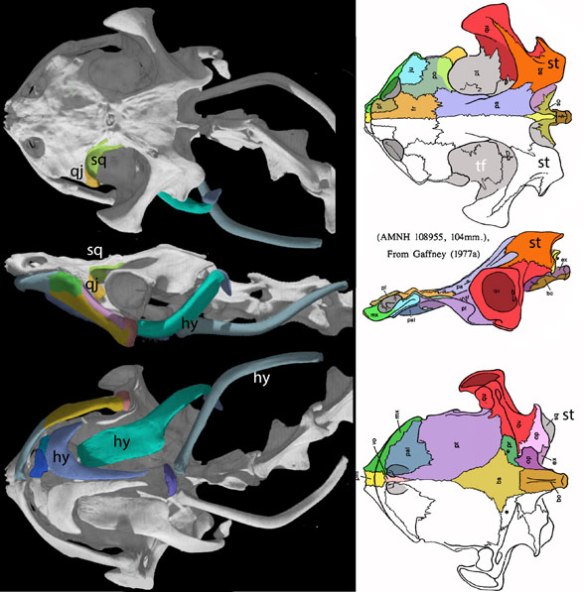 Figure 2. Chelus frmbiata, the mata-mata has a temporal fenestra. Not sure if it’s a lateral or upper type and I”m not looking, this time, at the hole leading into the quadrate. Just in front of those projections in dorsal view you’ll see the temporal fenestra of Chelus. Note the mistake made by Dr. Gaffney in overlooking the squamosal and quadratojugal (light green and yellow) while mislabeling the supratemporal (orange). The blue bones in ventral view are all hyoids used to anchor muscles that greatly expand the throat during prey capture.  Left image from Digimorph.org and used with permission. Right image from Gaffney 1979.

Another turtle with a lateral temporal fenestra
is Chelus frimbriata, otherwise known as the Mata-mata (Fig. 2), a side-neck turtle (pleurodire) with huge hyoids that help its neck expand quickly to suck in swimming prey items. This skull also qualifies for a top-ten position among the weirdest of all reptile skulls.

Dr. Eugene Gaffney, AMNH,
the dean of all turtle studies, unfortunately overlooked the squamosal and quadratojugal in Chelus (Fig. 2) while mislabeling the supratemporal in this and all other turtles he worked on (Fig. 3). That bone is typically very large in pareiasaurs and that mislabeling is likely one reason why some turtle workers are not recognizing the one and only valid pareiasaur – turtle relationship.

Here’s another example of the same mistake.

Figure 3. This GIF movie of two frames changes every 5 seconds. Note the caption Dr. Gaffney provides as he misidentifies the supratemporal as the squamosal. The right side of the specimen, not illustrated, could represent a loss or, more likely fusion of the squomosal and quadratojugal cheekbones. Image from Gaffney 1979.

Pelomedusa
(Fig. 3) is a more plesiomorphic (basal) side-neck turtle without a lateral temporal fenestra and a very deep post-temporal fenestra. But note the ventral emargination in the cheek region. Gaffney noted the extra bone, but because he had already mislabeled the squamosal, he didn’t recognize the combination of the squamosal and quadratojugal in the cheek.

And speaking of pleurodires
(side-neck turtles), most traditional studies find a basal split between pleurodires and cryptodires (vertical neck flexure). By contrast, the LRT splits hard, dome-shelled turtles from flatter, soft-shelled turtles by the Triassic. Proganochelys represents the former while Odontochelys represents the latter. And each has their own small pareiasaur ancestor. So turtles are diphyletic, but the two clades are closely related.