Pakicetus inachus (Gingerich & Russell 1981; middle Eocene; Figs. 1, 2) was originally hailed as “one of the oldest whales known anywhere.” Despite its lack of fins and flukes, Pakicetus was considered a whale based largely on the large posterior process of the periodic (near the ear region) and the thick, dense auditory bulla characteristic of all cetaceans. These traits indicate a underwater hearing and habitat even though Pakicetus had slender running legs and no flukes (Fig. 1). The resemblance of Pakicetus to Tenrec is striking — and remember some tenrecs, like Limnogale (Fig. 4), retained a long tail and are aquatic with webbed feet.

The case for a tenrec ancestry for Odontoceti continues
Indohyus major (Fig. 1; Rao 1971, Thewissen et al. 2007; Eocene, 48 mya; 1m in length) was considered an artiodactyl, but nests in the large reptile tree (LRT with Leptictidium (Fig. 1) between tenrecs and odontocete whales. So the case for Leptictidium as a whale ancestor is strengthened with the addition of its sister Indohyus. The case for a traditional artiodactyl ancestor for whales is much diminished.

Figure 2. Skulls of transitional taxa between tenrecs and Odontoceti (toothed whales). These include Tenrec, Lepticitidium, Pakicetus, Rhodhocetus and Orcinus. The gradual accumulation of traits should be readily visible to the casual observer here.

One of the major problems with the artiodactyl-whale hypothesis
is this: artiodactyls are herbivores. Odontocetes are carnivores. Tenrecs eat a wide variety of animals.

Mystecete whales have no teeth, and did not evolve from carnivores. Although hippos, mesonychids and desmostylians all have big teeth, all are herbivores. Their largest teeth function more like tusks. 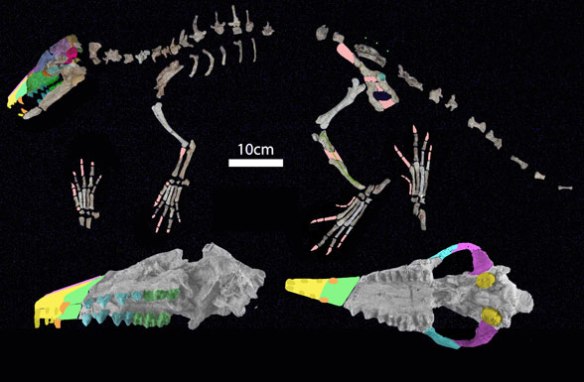 Figure 3. Indohyus skeletal elements nest between tenrecs and whales. While a sister to Leptictidium, the lines are more nearly equal in length here. We don’t know if Indohyus had claws or hooves. Leptictidium had long claws.

The mystery tenrec, Limnogale
No Limnogale skeletons are known to tenrec experts I contacted and little else is known of this extant, nocturnal, aquatic and long-tailed tenrec from Madagascar. It may hold a key place in the origin of whales. It appears to be plesiomorphic enough to do so, but it sure would be great to someday see a skeleton. The ears and eyes are small, the whiskers are bushy. Some tenrecs echolocate, but this taxon has been so little studied that I don’t know if it is an echolocator. 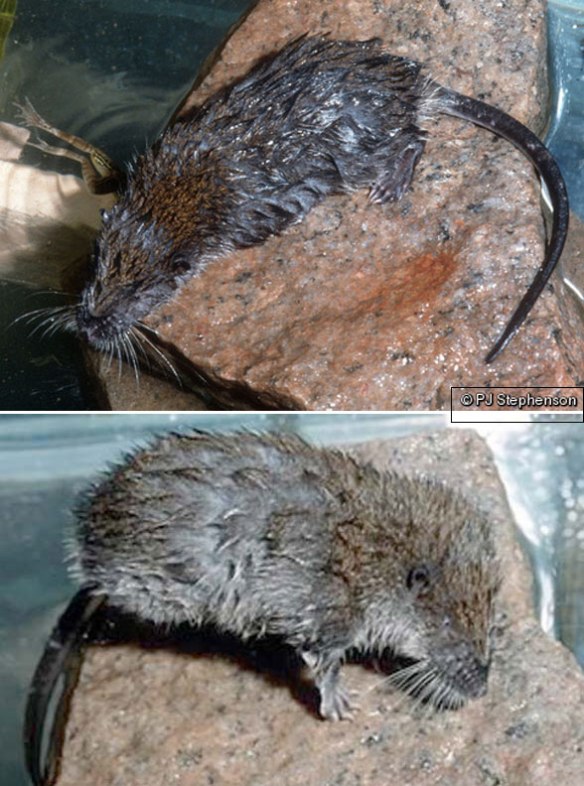 Figure 4. Is this the true ancestor of odontocete whales? The rare and rarely studied web-footed tenrec Limnogale mergulus, which has a long tail, is nocturnal and aquatic. Both images copyright PJ Stephenson and used with permission.

Thewissen et al. 2007 report,
Indohyus shares a similar auditory bulla with cetaceans, not present in artiodactyls. “Other significant derived similarities between Indohyus and cetaceans include the anteroposterior arrangement of incisors in the jaw, and the high crowns in the posterior premolars.”

Well, those traits,
as you can see (Fig. 2) are also found in Tenrec and its sisters, but Thewissen et al. did not test tenrecs and any of the sisters recovered in the LRT, other than Andrewsarchus and Sinonyx. Indohyus had thick bones (osteosclerosis) which provided ballast for underwater activities. That it nests with Leptictidium (Figs. 1, 2) adds credence to the aquatic hypothesis advanced earlier here. 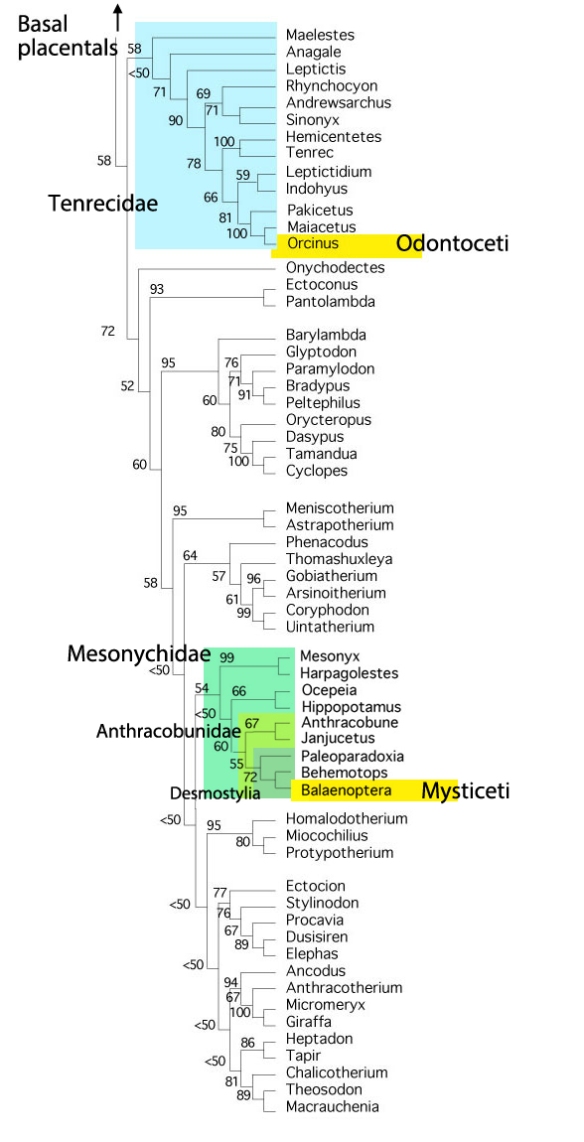 Figure 5. Subset of the LRT, higher placental mammals with a focus on whales (yellow) and their ancestral clades, the Tenrecidae and Mesonychidae. Both are a fair distance from artiodactyls. Note the displacement of Janjucetus. Now it looks like it probably had legs. We’ll look at Behemotops soon.

Traditional paleontology
holds that “Mysticeti split from Odontoceti (toothed whales) 34 million years ago during the Eocene” and whales moved to the sea 50 mya (Rose 2001) having descended from hooved mammals. The present hypothesis (Fig. 5) holds that indeed Mysticeti were derived from hooved mesonychids/hippos/desmostylians. However, Odontoceti, the toothed carnivorous/piscivorous whales arise from clawed tenrecs, like Leptictidium (Figs, 1, 2). The hands and feet of the protowhale Artiocetus (Fig. 6) are well known and at least several of its unguals are claws — though much reduced and somewhat transformed due to their much reduced use on land and unknown extent of the webbing. At least one tenrec had webbed feet, Limnogale (Fig. 4). I know of no artiodactyls with webbed feet. 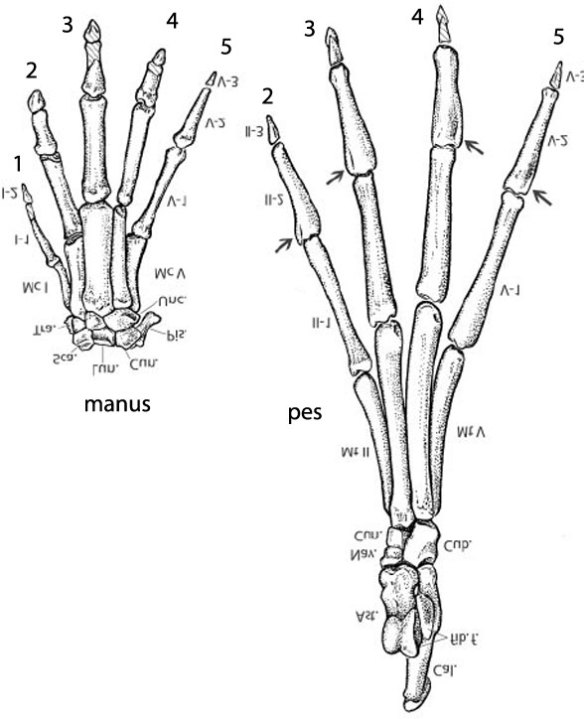 6. Artiocetus manus and pes had reduced claw-like unguals, not hooves. And Limnogale shows some tenrecs had webbed feet.

India/Pakistan and Madagascar
where odontocetes started and tenrecs now survive, were one continuous island that split apart some 88 million years ago… so there is no geographical barrier to the present hypothesis of tenrec and odontocete relations. But it does indicate the antiquity of the tenrec – odontocete split and relationship.

Australia and the Pacific rim
where mysticetes started and desmostylians were found is a much, much wider area. We find Desmostylia like Paleoparadoxia and Behemotops have only been found along the Pacific rim (Japan > Russia > Aleutian Islands > Pacific coast of North America  south to Baja California. A desmostylian sister, Anthracobune, is found in Eocene (40 mya) Pakistan. Janjucetus is found in younger 25 mya strata in Australia. A hippo and mesonychid sister, Ocepeia, dates to the Paleocene (60 mya) in Morocco, which is even further from Australia. So, the origin of the Mysticeti, appears to be somewhere along the Pacific rim.  More details tomorrow.