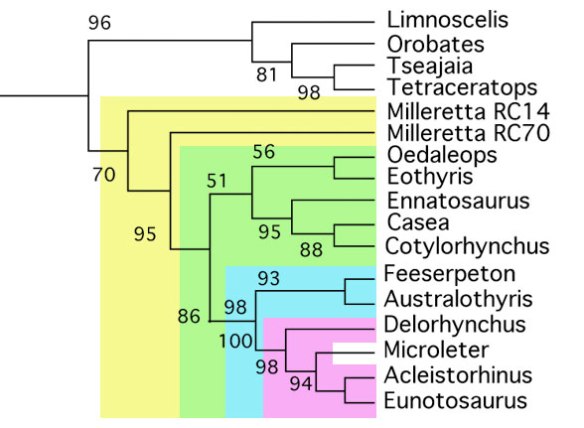 From the Hirayama R and Nakajima abstract:
“Eunotosaurus africanus has been often hypothesized as an ancestral form for turtles, as they share the wider dorsal ribs and highly reduced number of axial skeletons of body portion (1). Recent research points out further synapomorphies such as the T-shaped cross section of dorsal ribs shared with Triassic stem turtles such as Pappochelys, (2) Odontochelys, and Proganochelys. Nonetheless, this theory has a serious weak point—in E. africanus, the gastralia were absent, or very poorly developed as reported in just a few specimens, if any. (3) Ontogenetic studies of extant turtles strongly suggest that the chelonian shell was formed as a result of association of both carapacial (dorsal vertebrae and ribs) and plastral (pectoral girdle and gastralia) elements, with reduction of distal portion of dorsal ribs. This scenario seems to be supported by the body plan of Triassic stem turtles (4). E. africanus, however, has uniquely developed distal part of dorsal ribs. Dorsal vertebrae of E. africanus indicate a horizontal movement of the body and the presence of intercostal muscles. E. africanus has a unique overlapping of dorsal ribs, unknown in any stem turtles. (5) A T-shaped cross-section of dorsal ribs is observed in several tetrapods such as ankylosaurs (Ornithisuchia (sic)), armadillos, and anteaters (Xenarthra), not unique to E. africanus and stem turtles. In conclusion, E. africanus has its own uniquely derived defensive body structure, exclusively depending on dorsal ribs, not probable as an ancestral form to the turtle body plan. (6)

Notes
References
Hirayama R and Nakajima Y 2016. Is Eunotosaurus africanus really ancestral to turtles? Abstract from the 2016 meeting of the Society of Vertebrate Paleontology.