Revised July 27, 2018
with a new nesting for Volaticotherium closer to Eomaia. 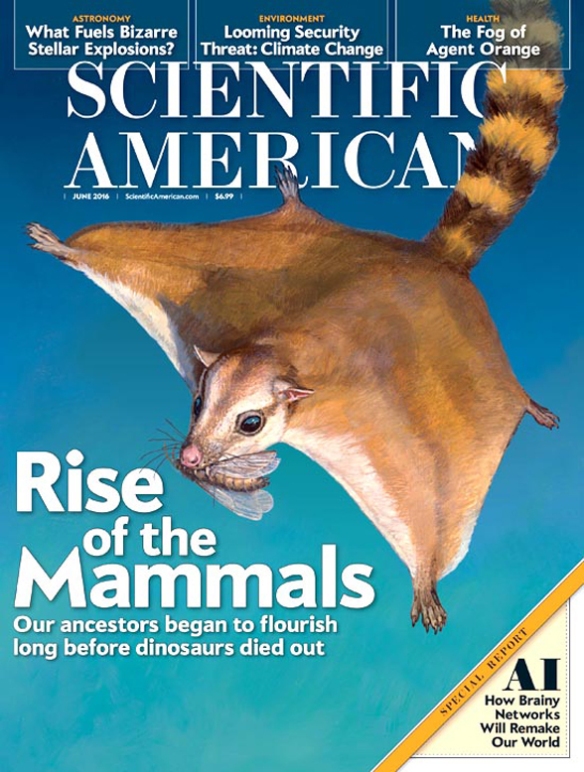 Figure 1. Scientific American recently featured Volaticotherium on its cover. Did Volaticotherium have a patagium and bushy tail? Good question. James Gurney is the illustrator here. Note the fangs!

Volaticotherium antiquus (Meng et al. 2006; ?Middle Jurassic to ?Earliest Cretaceous, 164 mya; 3 cm skull length; IVPP V14739; Figs. 1-3) was described a few years back as a gliding mammal of uncertain affinity, based on a preserved patagium, or gliding membrane, complete with short hair and skin. Oddly, the patagium was preserved, but not the basic skin and fur, usually preserved as a halo around the skeleton.

Figure 2. Volaticotherium in situ, in X-ray, as originally traced (line drawing) and DGS traced (colors). Patagium is the large tan ovoid. The X-ray has different outlines and so may represent the counter plate. You can see some of the distortion necessary to align elements.

Unfortunately
the skin has slipped off the scattered roadkill skeletal elements like a bath towel (Fig. 2) leaving some doubt as to where it connected to the body and limbs. If a patagium, its symmetrical counterpart, if present, is not preserved and the skin itself seems to be fully stretched out, at odds with patagia of other flying and gliding animals, that tend to shrink went not in use. Interesting, perhaps, that the patagial outline roughly corresponds to what the basic skin of Volaticotherium would have to be. No such skin was mentioned in the text or is visible in the fossil as a halo or scattering of fur. Sister taxa, such as Eomaia and Didelphis (Fig. 5), do not have a bushy tail, as illustrated above (Fig.1).

Did female Volaticotherium glide
with exposed underdeveloped young attached only by jaws on nipples?  Bats leave their young at the roost while feeding, until they are hold enough to cling well and they have one pup at a time.  Colugos likewise have a single pup at a time and carry them in their nursery/gliding membranes. See image here. Wikipedia reports, “Colugos raise their young in a similar fashion to marsupials. Newborn colugos are underdeveloped and weigh only 35 g (1.2 oz).[9] They spend the first six months of life clinging to their mother’s belly. The mother colugo curls her tail and folds her patagium into a warm, secure, quasi-pouch in order to protect and transport her young.”

Figure 3. Volaticotherium reconstructed. Here the patagium appears to be able to just drape over the head and torso, unlike the much larger membrane in Cynocephalus, the flying lemur. Shown as a biped here, that was likely only a temporary pose, like a squirrel on its haunches. Occipital bones are not shown.

There’s much more to this extraordinary mammal that is not controversial.
The molars resemble rotary saw blades, the external naris is divided by an ascending process of the premaxilla (rare among higher cynodonts and mammals), proximally the femur has no ‘neck’ and not much of a ‘head’, and the tail is extraordinarily long. Not listed by Meng et al., The mandible is not gently convex, but is sharply convex ventral to the canines, then gently concave, a shape not otherwise seen until higher primates. We also see a deeper mandible medial to sabertooth fangs in Thylacosmilus, and this may be the reason for the oddly deeper chin here.

Volaticotherium was deemed so different
from all other known mammals that it was given its own order, the Volaticotheria, nesting between basalmost mammals (Proteutherians) and Therians.

Here
in the large reptile tree, despite its many autapomorphies and convergent traits, Volaticotherium nests between the Eomaia clade and all higher marsupials. This is appropriate, given its Late Jurassic age. The two were roughly comparable in size.

The femoral head
of Volaticotherium was about as shallow as it could be and evidently not due to crushing. Generally a spherical femoral head provides strength and maneuverability. Cartilaginous or connective tissue may have substituted for bone in Volaticotherium.

Other arboreal features
The hallux (big toe) diverged from the other metatarsals at 35º angle, flexor sesamoids and curved phalanges with small sharp claws indicate an arboreal niche for Volaticotherium. The limbs were all described as elongated, but only the forelimb appears elongated relative to the femur (Fig. 3). The distal phalanges would appear to be fully flexed, tucked beneath the proximal phalanges, but the X-ray does not reveal them. The long tail was likely used in balancing and leaping, like a lemur. The cervicals were very short, as in the basal primate, Notharctus, and in Longisquama, a lemur-like lepidosaur. The scapula was relatively small, as in Notharctus and Longisquama. The calcaneum was relatively short and flexible, enabling rotation of the foot for better grasping of tree trunks while heading in any direction.

The holotype genus
for the triconodonts, Triconodon, provides evidence for the replacement of its lower fourth premolar, erupting and coming into use when at least three out of its four molars were already fully erupted, which is a mammal trait. Note the very low jaw articulation and sub canine ‘chin’, traits shared with Volaticotherium.

Perhaps this triconodont clade
evolved a simplified, more primitive-type tooth with aligned cusps. If so, it’s not alone. Toothed cetaceans, for instance, have only simple conical teeth.

Figure 6. Line art (w/o color) from Gaetano and Rougier 2011. This reconstruction of Argentoconodon is built from many small fragments and appears to have a few problems. Nevertheless, these fragments and those molars are similar enough to Volaticotherium to warrant interest.

I thank Dr. Meng
for sending me a pdf of his paper describing an important early arboreal mammal. I have an inquiry for him, still awaiting a reply, wondering if the simplified (primitive) molar structure of Volaticotherium, might be a derived reversal… an atavism.

1 thought on “A skeletal reconstruction of Volaticotherium”