I can’t believe
the quad launch hypothesis (Fig. 1)  is still alive… but it is. Perhaps just barely.

Rayfield, Palmer and Martin have an offer
for a budding paleontologist/engineer student designed to frustrate that young talent because they know their conclusion before they initiate experiments and they will not investigate more promising hypotheses.

According to Rayfield, Palmer and Martin (links below):
“The main objective of this proposal is to investigate the effectiveness of the quadrupedal launch [of pterosaurs] and by comparing it with the bipedal launch of birds, test if it was one of the factors that enabled pterosaurs to become much larger than any bird, extant or extinct.” (Fig. 1 – and note: they are not testing the hypothetical quad launch of pteros against the hypothetical bipedal launch of pteros)

Figure 1. Quad launch of giant pterosaur as envisioned by Rayfield, Palmer and Martin. See text for list of problems. Note how the pterosaur literally floats off the Earth here, achieving great height, higher than any kangaroo leap from a standing start, prior to the first down stroke of the wings. Note the placement of the fingers in the final frame, unlike the ichnite evidence that shows lateral to posterior orientation of the fingers. Fossils show wing membrane fold to near invisibility prior to flight and the wing membrane is stretched between the elbow and wingtip. Artwork by Colin Palmer.

Choose to accept this assignment and you will be asked to:
“Create anatomical reconstructions of possible azhdarchid morphologies and using kinematic simulation software to create a simple baseline bipedal launch model, validated against published data for birds and humans and tested for sensitivity to assumptions and modeling detail.

Your reward for doing so:
“The student will join the large and vibrant Bristol palaeobiology community and receive training in anatomical and computational techniques.”

Figure 2. Quetzalcoatlus running like a lizard prior to takeoff. Click to animate. This configuration gets both the legs and the wings working together to build up airspeed prior to takeoff — if possible. This mode also powers rapid running — if flight is not possible.  Note the large mass of thigh muscles here, anchored on the long ilium and prepubes, much larger than the forelimb bones anchored on that small pectoral girdle.

According to Rayfield, Palmer and Martin [objections in bold]
“Pterosaurs adopted a quadrupedal stance 1, which meant that their forelimbs were used for both flight and locomotion, including launch 2, so carried less baggage once airborne 3 Hypothesised quadrupedal launch behaviour provided a long launch stroke and recruitment of large muscle mass to power take-off (Habib 2008) 4; proportionately larger than that available to birds. While the underlying concept of the quadrupedal launch is now widely accepted 5, the kinematic and anatomical details are poorly understood meaning that estimates of available launch power are very imprecise.6, Increasing our understanding of the take-off process will shed new light on the role it played in pterosaur gigantism and to help refine our estimates of pterosaur maximum size.”

“The project will establish the differences between the ground launch dynamics of birds and pterosaurs, how these relate to differences in morphology, scale with and enforce upper limits to size, before ultimately establishing the most effective morphology to maximise launch capability. This will be achieved by creating anatomical reconstructions of possible azhdarchid morphologies and using kinematic simulation software to create a simple baseline bipedal launch model, validated against published data for birds and humans and tested for sensitivity to assumptions and modelling detail. This baseline model will then be modified to incorporate quadrupedal launch morphology. The effect of varying muscle morphologies on power output and the effects of varying size and subsequent allometric relationships will be determined. Finally, anatomically correct simulation models will be constructed to model quadrupedal launch capability and potential upper limits to size.”

Okay let’s take a closer look at those boldface objections

Figure 3. Left: The so-called catapult mechanism in pterosaurs. Note the falsely reduced fingers enabling wing contact with the substrate. Right. The actual pterosaur morphology that keeps the wing off the substrate.

The proposal objective (above) is flawed.
Rayfield, Palmer and Martin want to test bipedal birds vs. quadrupedal pterosaurs, leaving out any study of bipedal pterosaurs. This assumes the validity of the quadrupedal launch a priori to finding hard evidence for it in the fossil record. Ignoring and deleting competing hypotheses and data is something we’ve seen from other pterosaur workers, also from southern England. Their must be some sort of factor of influence there.

Figure 4. Unsuccessful Pteranodon wing launch based on Habib (2008) in which the initial propulsion was not enough to permit wing unfolding and the first downstroke.

Pteranodon attempting a quadrupedal take-off
(Fig. 4) cannot open its wing fingers, which are like long bamboo poles held against the back of the wrist when quadrupedal, fast enough to open the wings before the first downstroke and gravity causes a crash — even if given one heck of a leap in a quadrupedal mode – a leap no kangaroo could match.

On the other hand
when Pteranodon starts with wings ready for the first downstroke at the moment of hind limb leap, then all the forces Pteranodon can muster are at play at the moment of take-off. A little more take-off speed could be added with a short, speedy, lizardy sprint while flapping for thrust and airspeed (Fig. 2).

Figure 5 Successful heretical bird-style Pteranodon wing launch in which the hind limbs produce far less initial thrust because the first downstroke of the already upraised wings provides the necessary thrust for takeoff in the manner of birds. This assumes a standing start and not a running start in the manner of lizards. Note three wing beats take place in the same space that only wing wing beat takes place in the widely accepted wing launch model of Habib (2008).

There is nothing wrong with a bipedal Pteranodon
I modeled one myself (Fig. 6). There is something wrong with a pole-vaulting Pteranodon, trying to lift its wings off the ground while at the same time forcing them against the substrate, rotate them parasagittally to the open position, extend the wings horizontally, lift the wing tips above its head, then apply the downstroke, all before crashing on its face. Evidently several English workers have invested far too much time and pages in the academic literature to turn back now. Professional pride is at stake and no one will notice if some of the evidence is overlooked and avoided. 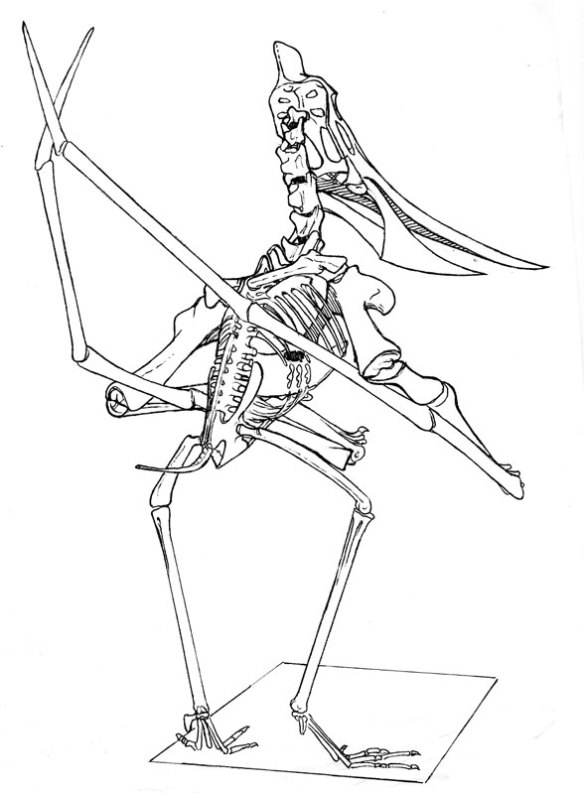