Updated June 3, 2017 with a relabeled Ornithorhynchus pelvis. I should have known the original was in error.

First of all,
the large reptile tree nests Akidolestes (Fig. 1;  Li and Luo 2006; Yixian Formation, Early Cretraceous. 124 mya; NIGPAS* 139381A, B) and the platypus, Ornithorhynchus, as the two basalmost mammals, contra Li and Luo 2006, which considered their similar traits convergent. (*Nanjing Insitute of Geology and Palaeontology, Nanjing, China)

Second,
Cretaceous mammals are most often described and nested by their tooth shapes because often that’s all the evidence we have of them.

Fourth,
the large reptile tree has not tested the closest sisters to Akidolestes (according to Li and Luo 2006), such as Zhangheotherium yet.

That being said,
I’m not the first paleontologist to wonder about monotreme phylogeny (Rich et al., 2005). Wikipedia reports, “The precise relationships between extinct groups of mammals and modern groups, such as monotremes, are somewhat uncertain.”

Figure 1. Akidolestes plate on counter plate on original tracing with color tracing added. Note the fish and the fur. The tail and beak are not broad. Images from Li and Luo 2006.

Akidolestes cifellii
(Early Cretaceous, Li and Luo 2006; Figs. 1, 2) was described as a symmetrodont therian (Class Mammalia > Clade Trechnotheria > Family Spalacotheriidae) with some monotreme-like postcranial features (Fig. 2). Essentially they report that Akidolestes was not related to Ornithorhynchus, but was a platypus mimic in certain regards. Here Akikdoletes cifelli nests as a sister to Ornithorhynchus and the evidence is compelling, at least, so far… 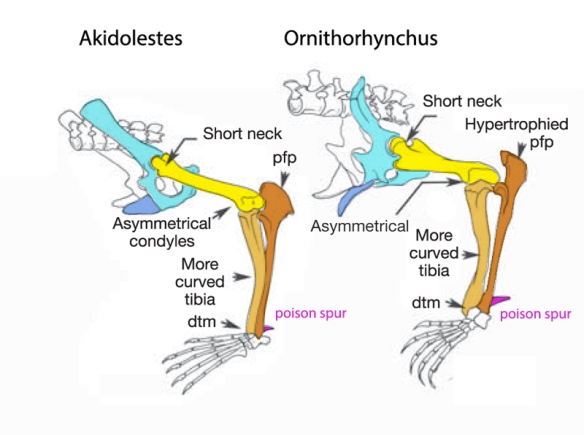 Figure 2. Illustraiion by Li and Luo 2006. The homologies of the hind limb of Akidolestes and Ornithorhynchus that Li and Luo considered as ‘functional convergence’. Note the prepubes, the pfp = parafibular process and poison spur. This suite of traits was seen as convergent in otherwise unrelated taxa by Li and Luo. They did not note the poison spur in their illustration text, but did so in their main text.

Missing from the Li and Luo tree
is the taxon Chiniquodon, one of the last mammal ancestors known from head to tail. But even if Chiniquodon is deleted from the LRT, the topology does not change.

Figure 3. Chiniquodon in situ, plate, counter plate, with selected bones colorized and manus + plate reconstructed. There are only 3 sacrals here, not 5. Note the parafibular sesamoid.

The teeth of Akidolestes
are shown in this Li and Luo closeup, colorized here (Fig. 4) for clarity. Note the flat, but not laterally expanded rostrum with dorsal nares (Fig. 5).

Figure 4. Rostrum of Akidolestes from Li and Luo with bones and teeth colorized

Figure 5. Reconstructed skull of Akidolestes traced from the lo-rez published images. Compared to Ornithorhynchus, Akidolestes has a larger orbit with a complete circumorbital series, a full arcade of teeth, and a relatively narrow cranium

The reconstructed skull of Akidolestes
(Fig. 5) has a long, but not distally expanded rostrum, a relatively narrow cranium, a full set of teeth and a larger orbit with a complete circumorbital series, The canines are not long, the molars have complex cusps. If this is indeed a sister to Ornithorhynchus, the great expansion of the braincase seen in extant monotremes, and many therians apparently is convergent based on the narrower braincases found in Akidolestes and Hadrocodium.

Is that yet another antorbital fenestra? Earlier we looked at several occurrences in which the antorbital fenestra occurred, not just in archosaurs and fenestrasaurs. Ornithorhynchus certainly has another one, and Akiodolestes may have one too, but crushing makes it difficult to determine.

Figure 6. Ornithorhynchus adult and juvenile skulls with bones identified. Note the posterior postorbitals that appear to be laminated to the expanded cranium and the septomaxilla that help form the rostrum. The antorbital fenestra appears lateral to the rostrum. The postorbital rams of the jugal is a primitive trait. The juvenile has teeth. Images courtesy of Digimorph.org and used with permission. The great expansion of the braincase may be convergent with therians.

The pelvis of Ornithorhynchus with elements colorized. The ilium does not have the classic extended appearance common to all other basal mammals.Rather the acetabulum is within a few vertebrae of the anterior tip.

A great deal of phylogenetic distance
separates Akidolestes from related taxa in the large reptile tree. Unfortunately candidate and putative sister taxa that I have found are largely represented by mandibles and teeth (but see below). Whether their addition to the matrix will resolve the nesting of the monotremes remains an issue for future consideration. I’m just catching up to the data one taxon at a time in this node of the cladogram.

Figure 7. Ventral view of the skull and dentary of two monotremes, Ornithorhynchus and Tachyglossus, with elements colorized. Note the ventral placement of the the ear ossicles (former posterior jaw elements.

Akidolestes was covered
in a dense ball of fur (Fig. 1) and it had a full set of teeth, but it did not have the broad swimming tail of Ornithorhynchus. Nevertheless, it was found with a fish fossil. Akidolestes was preserved in a lake environment. Other Yixian formation mammals include eutriconodontans, multituberculates, symmetrodonts, metatherians and eutherians, so Akidolestes was a late survivor of an earlier (Late Triassic radiation). Megazostrodon and Hadrocodium fossils are found in Early Jurassic strata.

Figure 8. Ornithorhynchus and Akidolestes to scale.

I cannot comment
on the tooth traits that diagnose Akidolestes, only on the other traits (see above), all of which nest it as an early representative of the monotreme radiation. Since Ornithorhynchus juveniles have teeth that transform as adults, I wonder if there was some phylogenetic transformation in the teeth of Ornithorhynchus over the last 100-200 million years. The phylogenetic branches that separate Akidolestes from Ornithorhynchus might go back to the Triassic, or just to the Early Cretaceous.

Li and Luo note: “The shoulder girdle and forelimb are similar to those of zhangheotheriids. However, Akidolestes differs from zhangheotheriids but is similar to monotremes in many features in the posterior part of the skeleton.”

According to Wikipedia, “Zhangheotherium is a genus of symmetrodont …mammals. Zhangheotherium has many primitive characteristics. Among them is a spur at the foot, seen today in the modern platypus. In addition, it walked with a reptilian sprawl, like Monotremes and many Mesozoic mammals such as Jeholodens and Repenomamus.” I see that Zhangheotherium has a smaller coronoid process, but not an elongate rostrum.

Note added a day later:
Zhangheotherium could not be scored for many skull traits because it is preserved dorsal side down and crushed. Given those limitations, Zhangheotherium nested as a basal eutherian between Juramaia and the remaining eutherians in the large reptile tree. Like Ornithorhynchus, Zhangheotherium is reported to have had an ankle spur. There is some disturbance in the tarsus, so this needs to be confirmed. The femora could be adducted close to the body, unlike Ornithorhynchus, and like most eutherians.

Not sure how much deeper this should be examined
in the context of reptile evolution, but you can clearly see that one answer leads to several more questions… which keeps the science endlessly interesting. I have studied basal mammals now for only a few hours, so I present findings, but I’m no expert. High resolution images have been requested.

Last minute addition
Sinoconodon rigneyi (Early Jurassic, Patterson and Olson 1961) was added to the LRT and nests between the monotremes and Megazostrodon + Hadrocorium.

3 thoughts on “Akidolestes, perhaps not a platypus mimic, but a platypus ancestor and basalmost mammal”