Duckbills,
like Edmontosaurus, and their kin are the ornithopod ornithischian dinosaurs, a clade I have been ignoring until now. Wikipedia reports, “[they] started out as small, bipedal running grazers, and grew in size and numbers until they became one of the most successful groups of herbivores in the Cretaceous world, and dominated the North American landscape.”

Dryosaurus, Camptosaurus, Iguanodon and Edmontosaurus are genera within this clade and each has an interesting manus (Fig. 1). When one works in phylogenetic analysis it is imperative to compare homologous digits (apples to apples). In ornithopods, those homologies appear to be masked and perhaps misinterpreted by the appearances of new phalanges and the disappearances of old phalanges. Putting them all in one image (Fig.1) clarifies all issues (even without traveling to visit the fossils firsthand!). Hopefully the data are accurate to start with.

This all started with a phylogenetic analysis
that appeared to indicate that Edmontosaurus had a manual digit 1 with an extra digit that made it look like manual digit 2. Comparisons to other ornithopods ensued. A quick look through the Internet brought B. Switek’s article (see below) to the fore. 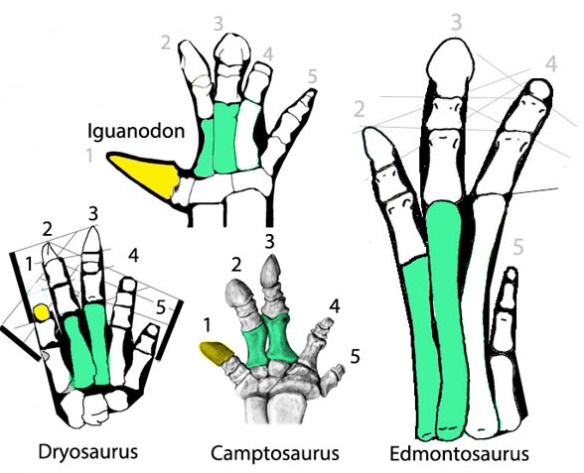 Figure 1. Ornithopod manus. Here the hands of Dryosaurus, Camptosaurus, Iguanodon and Edmontosaurus are compared. Note the turquoise metatarsal homologies and the digit identifications based on that.

Giving credit where credit is due,
Switek may be the first to suggest the spike was not a digit. I don’t know and was not able to find out the history of the spike. Given the text from his blogpost, you can see Switek’s choice of words actually evolves from “thumb spikes” to “false thumb” to “hand spike” to “enlarged wrist bone”. Like Brian, I also lack a PhD, but that doesn’t stop us from making contributions. If I’m duplicating earlier academic efforts, please let me know so credit can be given.

Here we’ll show
that the Iguanodon spike is indeed a thumb ungual. The first phalanx and metacarpal are fused like two poker chips.

We’ll start with
the right manus of Dryosaurus, a basal ornithopod (at least in the large reptile tree it is, where only one other ornithopod, Edmontosaurus, is currently represented). During the course of this, I want you to focus on the the homologies of metatarsals 2 and 3 (colored in turquoise). These, I think, will guide us to correct interpretations of the other elements of the various ornithopod manus.

Now back to the manus of Dryosaurus:

The manus of Iguanodon

The manus of Edmontosaurus