Not content
with a fully resolved cladogram, I wanted higher Bootstrap scores at certain nodes to ascertain nesting pairs. So I reviewed the data for several taxa, among them Nemicolopterus. I found mistakes and oversights, nearly all of which more closely match Nemicolopterus to its much taller sister, Shenzhoupterus (Fig. 1) within the larger encompassing Germanodactylus/Tapejara clade.

When first announced
(Wang et al. 2008), Nemicolopterus was hailed as the smallest, or one of the smallest known pterosaurs. And it is. But there is one other that is only half as tall (Fig. 2) which we looked at in more detail yesterday, B St 1967 I 276. 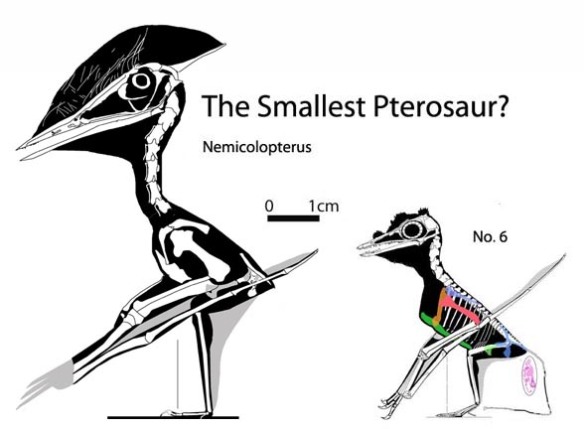 An insitu tracing
animated in a GIF movie reveals the bones segregated by digital layers (Fig. 3).

Figure 3. Two images of Nemicolopterus superimposed and traced with transparent colors. Note, not all of the shapes seen in photo 1 can be seen in photo 2. There appear to be extra tiny bones in the belly of this specimen where all the ribs and gastralia have been accounted for. Click to enlarge.

A displaced sliver of bone in the cheek
would appear to be the ventral portion of an orbit-dividing lacrimal, as in sister taxa. No one would identify this bone as such without phylogenetic bracketing. Hairlike soft tissue arising from the rostrum evidently precedes the rostral crest found in Shenzhoupterus. The free fingers remain unknown.

Phylogenetic miniaturization
appears to be at work once again with Nemicolopterus, a tiny adult at the base of a major clade or two of pterosaurs in the large pterosaur tree.