A new paper by Pinheiro et al. 2016
reports that the small skull (UNIPAMPA 653) of a new genus, Teyujagua paradoxa (Figs. 1, 2), is “transitional in morphology between archosauriforms and more primitive reptiles. This skull reveals for the first time the mosaic assembly of key features of the archosauriform skull, including the antorbital and mandibular fenestrae, serrated teeth, and closed lower temporal bar. Phylogenetic analysis recovers Teyujagua as the sister taxon to Archosauriformes…”

Well, that might be true if
you restrict the taxon list to the few (44) taxa employed by Pinheiro et al.

But when you expand the taxon list
to the size of the large reptile tree (660+ taxa) where we already have a long list of Youngina, Youngoides (Fig. 1) and Youngopsis sisters to Archosauriformes, then Teyujagua nests as a phylogenetically miniaturized sister to the NMQR 1484/C specimen attributed to Chasmatosaurus alexandri (Fig. 1). Like another phylogenetically miniaturized descendant of chasmatosaurs, Elachistosuchus huenei MB.R. 4520 and BPI 2871 (Figs. 3, 4), Teyujagua also turned its once large antorbital fenestra into a vestige (Figs. 1, 2). 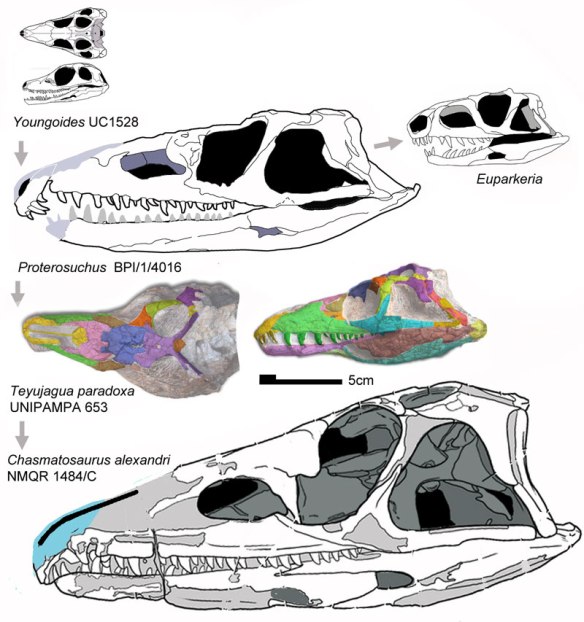 Figure 1. Teyujagua compared to sister taxa, including Youngoides, Proterosuchus and Chasmatosaurus. Teyujagua is a phylogenetic miniature in which the antorbital fenestra became a vestige. Note the posterior jugal, which may or may not have supported a now missing quadratojugal anterior process.

I can see why the authors got so excited about their discovery.
The Teyjjagua skull looks like a little Chasmatosaurus skull without the antorbital fenestra. That’s because it IS one. In their own words, “This skull represents a previously unknown species that is the sister taxon to Archosauriformes and which fills a major morphological gap in understanding of early archosauriform evolution.”

Unfortunately, the authors were dealing with an antiquated cladogram
in which Youngina is basal to lizards and archosaurs… among many, many other atrocities.  They report, “Our novel cladistic analysis recovered two most parsimonious trees with 872 steps. The strict consensus of these topologies positions Teyujagua as the sister taxon of Archosauriformes, a position previously occupied by the Lower Triassic Prolacerta.” 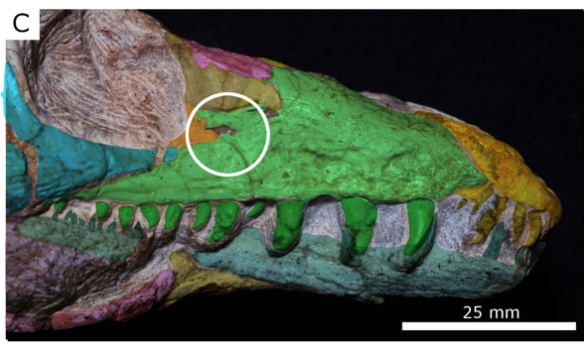 Figure 2. The rostrum of Teyujagua with the vestigial antoribital fenestra circled here. You can see how the maxilla grew over the opening. Once again, this is data that should have been announced from firsthand observation by PhD level paleontologists, not from a casual observer of photographic data.

Comments on the diagnosis
The NMQR 1484/C specimen of Chasmatosaurus (Fig. 1) is pretty well preserved except for the premaxilla/narial region. Given the morphology of the Teyujagua rostrum, the NMQR specimen likely shares the trait of a dorsal naris, perhaps with a slender ascending process of the premaxila, which might be lost in both specimens. The maxilla actually does not appear to reach the orbit. The antorbital fenestra remains present as a closed over vestige. The lower temporal bar might be incomplete, but just as likely the anterior process of the quadratojugal might be taphonomically missing, as in the NMQR specimen (Fig. 1). Other proterosuchids have similar tooth serrations. The mandibular fenestra is further forward, but the posterior mandible is also deeper. The specimen is indeed distinct enough to merit a unique generic name, as is the case with several of the Chasmatosaurus/Proterosuchus specimens, which do NOT represent a growth series.

Phylogenetic miniaturization
has reduced the antorbital fenestra in BPI 2871 and Elachistosuchu, which nest at the base of the Choristodera. Both nest as descendants of larger Chasmatosaurus specimens in the large reptile tree. 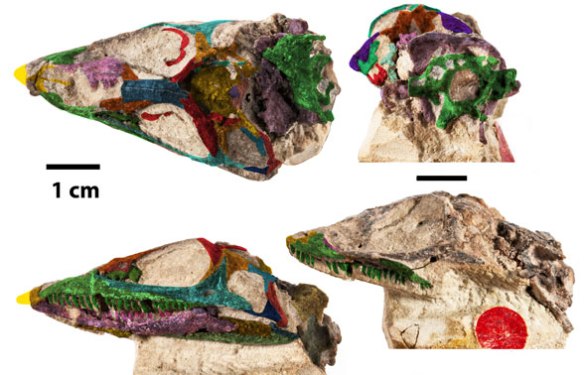 Not mentioned by the authors
The miniaturized skull of Teyujagua has fewer teeth than in sister or ancestors, but matching the condition in Euparkeria (Fig. 1), a related taxon only one node away at the base of a sister clade.

Figure 4. Rostral area of BPI 2871, formerly considered a younginid and here nesting at the base of the Choristodera as a descendant of Chasmatosaurus.

If you don’t remember
this earlier post (2011), Youngoides (UC1528, Fig. 5) had the genesis of an antorbital fenestra. It is the current proximal sister to the Archosauriformes in the large reptile tree.

Figure 5. GIF movie tracing the antorbital fenestra with fossa and surround bones of the FMNH UC 1528 specimen of Youngoides romeri. This is one of the earliest and most primitive appearances of the archosauriform antorbital fenestra, previously overlooked.

4 thoughts on “Teyujagua: Not “transitional between archosauriforms and more primitive reptiles””