Earlier we looked at Bever et. al. 2015, a paper that purported to provide an answer for the anapsid origin of turtles by unsealing the temporal fenestra of purported ancestors, like Eunotosaurus (Figs. 1-3). As you might recall with incredulity, the authors actually peeled back the supratemporal to expose what they considered a hopeful upper temporal fenestra.

Even earlier we looked at Lyson et al 2014 (ome of these authors are the heavy-hitters and grand old men of paleontology), who examined the ribs of Eunotosaurus and considered them homologs of turtle ribs. They sure look like turtle ribs, but like other reptiles (e.g. Sinosaurophargis, Minmi and Henodus) this was by convergence. Those authors need to broaden their search. 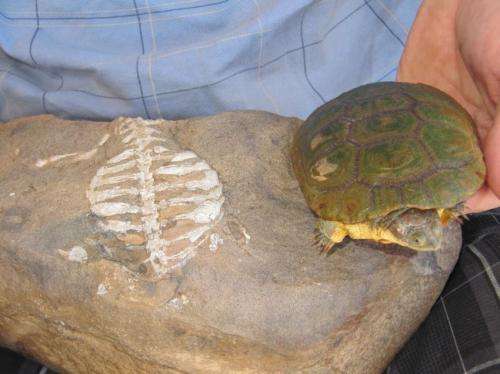 Figure 1. This looks like Eunotosaurus (fossilized at left) is the ancestor to the extant turtle (in vivo at right), but phylogenetic analysis tells us this is just a case of convergence.

Unfortunately,
both Bever et al. and Lyson et al. essentially ignored the verified ancestors of turtles among small horned pareiasaurs (Figs. 1, 2) like Sclerosaurus and Elginia. This likely happened because the authors put all their effort and enthusiasm into Eunotosaurus, which, among many other reptiles, was convergent with turtles in several regards.

We’ve seen bias and propaganda like this before
whenever workers discuss the archosaur ancestry of pterosaurs, the Lagerpeton ancestry of dinosaurs, the diadectid ancestry of reptiles, the synapsid ancestry of caseids and other nestings not verified by the large gamut study at ReptileEvolution.com. In the latter study turtles are provided 660+ candidate taxa to nest with, including Eunotosaurus and other shelled reptiles. And with these choices, turtles nest with small horned pareiasaurs.

Figure 2. Click to enlarge. Above: Taxa employed by Bever et al. to promote their view of a diapsid origin for the turtle skull. Below: what the large reptile tree recovers. Note that Bever et al. mislabel the supratemporal and squamosal and they omit the best candidates for turtle ancestry. Eunotosaurus is a sister to Acleistorhinus. For more details, see the large reptile tree. Elginia, a key transitional taxon at the base of the hard shell turtles, is not shown here. Use the links below to find it at ReptileEvolution.com

In like fashion, Lyson et al. 2015 ignored
better, closer, more parsimonious ancestral candidates among the small pareiasaurs in their post-cranial studies (Fig. 2). I know those broad ribs are tempting, but a suite of 228 traits indicates that turtles do not nest with Eunotosaurus. By convergence, Diadectes and Stephanosphondylus have broad anterior ribs on narrow stems, and neither is more closely related to either Eunotosaurus or turtles. The origin of the soft shell or hard shell turtle shell is still unknown or unpublished. The Bever et al cladogram (Fig. 2) is old school. It does not echo the results of the large reptile tree.

A further problem
All prior studies, and I mean ALL prior studies, mislabeled the supratemporal and squamosal in Proganochelys and other living turtle. Even Gaffney 1983 mislabeled the horns of Meiolania as squamosal horns. Unfortuantely alll prior workers have ignored the correct labeling of the supratemporal horns of Elginia, which is a sister to the most basal hard shell turtle, Meiolania. No prior workers have published on the dual origin of soft shell and hard shell turtles. As you can see (Figs. 2, 4) the basalmost turtles are widely divergent in morphology. We still expect to find the Archaeopteryx of turtles. Despite Lyson’s quote, he doesn’t have it in Eunotosaurus. He has its crafty impostor.

Lee 1997 had it right.
That turtle origin study should not ignored. Lee found that pareiasaurs made good ancestors to turtles.

First things first.
Lepidosaur diapsids are not related to archosaur diapsids. This goes back to the origin of reptiles. So there is a lot of work to be done out there. That work has already been done here.

Figure 4. Dorsal views of bolosaur, diadectid, pareiasaur, turtle and lanthanosuchian skulls. The disappearance of the turtle orbit in lateral view occurs only in hard shell turtles.

Getting back to our headline:
The anapsid skull of modern turtles evolved from the horned anapsid skulls of small pareiasaurs without rib modifications (based on Sclerosaurus, Fig. 4). We don’t have postcrania for Elginia and the ribs of Bunostegos have not been published. We would like to have those ribs. We don’t have them at present.