Figure 1. The lectotype of Protorosaurus identified by Gottmann and Sanders. See below for a reconstruction and comparisons.

Unfortunately
Gottmann-Quesada and Sanders consider Diapsida the ancestral clade for Archosauromorpha and Lepidosauromorpha. The large reptile tree (now 614 taxa) does not support that old paradigm. Their analysis is based on the data set of Dilkes (1998) “because he was the first to propose a paraphyletic Prolacertiformes.” Unfortunately for Gottmann-Quesada and Sanders the Dilkes study focuses on the basal rhynchosaur, Mesosuchus, a taxon completely unrelated to Protorosaurus in the large reptile tree. The Gottmann and Sanders tree is similar to that of Nesbitt et al. (2015) we just looked at with regard to Azendohsaurus.

Relying on someone else’s tree
has become more and more of a headache for paleontologists who keep chasing their tails with untenable and falsified cladograms.

Figure 2. Results of the most inclusive phylogenetic analysis of early archosauromorphs by Gottman-Queseda and Sanders. Note the separation of Protorosaurus and Prolacerta, the nesting of Protorosaurus with Megalancosaurus and the use of suprageneric taxa. This tree suffers greatly from too few specific taxa. Pamelaria is misspelled Palmeria, the least of the many problems with this tree.

In contrast,
the large reptile tree finds that Archosauromorpha and Lepidosauromorpha are basal reptile clades (with Gephyrostegus bohemicus of the Westphalian) nesting as a closest known sister to that as yet unknown, but close to Eldeceeon, a Viséan ancestor. The Diapsida, therefore, turns out to be diphyletic with lepidosaurs on one branch and archosaurs on the other, related to each other only through G. bohemicus.

Figure 3. The Protorosauria. nests two Prolacerta specimens and three Protorosaurus specimens, along with a scattering of others. Click to enlarge.

Getting back to Protorosaurs (taxa nesting with Protorosaurus)
they nest basal to the archosauriformes and both are derived from terrestrial younginiformes. Former  protorosaurs, like Macrocnemus and Tanystropheus now nest within the Lepidosauria between Rhynchocephalia and Squamata. This new paradigm has to start sinking in and permeating the paleo world.

That compares to
228 characters and 610 taxa in the completely resolved large reptile tree with generally high to very high Bootstrap values throughout. All subsets remain fully resolved. That means deletion of taxa do not affect the remaining tree topology in the large reptile tree. And all derived taxa are preceded by series of taxa with gradually accumulating character traits — unlike other traditional trees, like the Dilkes/Gottman-Quesada and Sanders tree 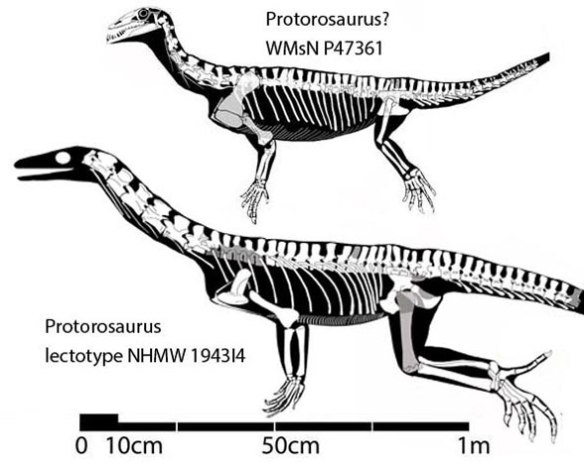 Figure 4. Two taxa assigned to Protorosaurus by Gottmann-Quesada and Sanders. The lower one is the new electrotype (Fig. 1). The upper one nests closer to Pamelaria and is clearly not congeneric. See how reconstructions help? Some of this is not immediately apparent in the fossils themselves.

The Gottmann-Quesada and Sanders analysis (Fig. 2)
nested Protorosaurus with the drepanosaurid Megalancosauru and away from Prolacerta. That should have been noticed as a red flag. One can only wonder how poorly these taxa were scored for such nestings to happen.

The large reptile tree nested Protorosaurus with Prolacerta and other protorosaurs.
Which analysis would you have more confidence in?

Figure 5. The putative Protorosaurus juvenile (in situ) is actually a large Permian Homoeosaurus.

A juvenile Protorosaurus?
Gottmann-Quesada and Sanders considered the Late Permian reptile IPB R 535 (Institut für Paläontologie, Unversität, Bonn) the first and only juvenile Protorosaurus.  I added it to the large reptile tree and recovered it rather securely as a large Homoeosaurus, a long-lived taxon otherwise known from Jurassic strata. This specimen adds to the small but growing number of known Permian lepidosaurs,

Figure 6. The WMsN-P47 specimen assigned to Protosaurus, but is closer to Pamelaria. The scapulocoracoid is not fused, as proven by one scapula flipped so that the dorsal rim is in contact with its corticoid. I’ve always wondered about that inconsistency. A hi-rez image and DGS solved that problem.

The WMsN-P47 specimen that Gottmann-Quesada and Sanders assigned to Protorosaurus (Fig. 4) is actually closer to Pamelaria (see figure 7) in the large reptile tree. This specimen is too distinct to be lumped with Protorosaurus.

Gottmann-Quesada and Sanders reported
that Protorosaurus has seven cervicals. I found evidence for eight without seeing the fossil first hand. DGS techniques enable the identification and reconstruction of skull elements in the pre-Pamelaria specimen (Fig. 6) previously considered too difficult to attempt.

It is unfortunate
that Gottmann-Quesada and Sanders lumped all of their Protorosaurus specimens together when there is clearly a diversity of morphologies and sizes here. They did not feel the need to perform a phylogenetic analysis on the individual specimens or to create more than a single skull reconstruction (Fig. 8).

And I apologize
for earlier reconstructions created out of more than one specimen. I should never have created chimaeras. They really mess up phylogenetic analyses.

Figure 8. GIF animation of the NMK S 180 specimen assigned to Protorosaurus by Gottmann and Sanders. I was able to tease out certain palatal bones ignored by them. Reconstruction by Gottman and Sanders.

Gottmann-Quesada and Sanders mention Peters (2000)
due to that paper adding pterosaurs to the list of then considered prolacertiformes (later corrected in Peters 2007). They report, “this analysis suffers from over interpretation of poorly preserved fossils.” This is more professional BS. Either one look or rigorous examination of the fossils studied in Peters (2000) reveals that all include soft tissue and preserve every bone in articulation, which is the definition of “exquisitely preserved.”

I can only imagine
that, like Hone and Benton (2007, 2009) Gottmann-Quesada and Sanders felt the need to cite relevant literature, but shuddered at the prospect of actually dealing with non-traditional results. To their point on interpretation, mistakes were made in Peters (2000), some from under-interpretation and some from naiveté. That is why I submitted corrections (which were rejected), including Peters 2007 (which was published as an abstract). ReptileEvolution.com/cosesaurus.htm and links therein publicly repair the errors found in Peters (2000).

Gottmann-Quesada and Sanders report
the only trait uniting the Prolacertiformes [protorosaurs] are the elongated mid-cervical vertebrae. Unfortunately this trait also appears in several other clades within the Reptilia. The large reptile tree likewise did not find a single common character in the protosaurs. As in so many other clades it is the suite of traits that lump and separate them.