The orientation of the pubis
in certain, otherwise bird-like, tiny theropods, the Scanoriopterygidae, has been an ongoing problem. Today we solve that problem without looking at the specimens firsthand.

Figure 1. Scansoriopteryx is a basal bird derived from a sister to the Eichstaett specimen of Archaeopteryx. Note the long manual digit 3. The pelvis is reconstructed here with the pubis and ischium reversed from the original and traditional interpretation. See figure 2 for the reason behind this. This specimen is considered a juvenile.

Scansoriopteryx heilmanni
(Czerkas and Yuan 2002,  CAGS02-IG-gausa-1/DM 607) is a small basal bird (as recovered by the large reptile tree). It has a bird-like pelvis, but this has not been recognized by other paleontologists who identified the displaced ischium as the pubis and the pubis as the ischium. That made it appear that the pubis did not point posteriorly, as it does in all birds and related taxa. A reinterpretation of the pelvis is shown here (Fig. 2). The pubis is still in contact with the appropriate area of the ilium, forming the anterior acetabulum. Only the ischia have been displaced — in two different directions.

Figure 2. The pelvis of Scansoriopteryx GIF animation. Note: only the two ischia are displaced here. The pubis retains a suture with the anterior rim of the acetabulum portion of the ilium.

So there you are. Problem solved.
But wait… there’s another example of a sister taxon with a similar problem!

Figure 2. Theropod dinosaur subset of the large reptile tree showing the nesting of four Archaeopteryx specimens at or near the bases of several basal bird clades, including the Enantiornithes, the Scansoriopterygidae and the Euornithes.

Epidexipteryx has a similar problem in its pelvis
Another scanoriopterygid, Epidexipteryx (Zhang et al. 2008, Figs. 3, 4, IVPP V 15471) also has a mistakenly identified pubis and ischium. Ironic and odd, but true. This anurognathid-like basal bird has the largest teeth relative to its skull of any bird. Zhang et al. thought Epidexipteryx was a bizarre maniraptoran nesting just basal to birds

Figure 3. Epidexipteryx pelvis with former ischia now pubes, and former pubes now manual 3.3 and m3.4 and former feathers now ischia identified and reconstructed. Complete manus of Scansoriopteryx is ghosted as a blueprint for the Epidexipteryx fingers. This pelvis and manus are taphonomically dispersed and broken. What looked like a straight pubis is really  a big finger tip. This is how DGS can add value in paleontology.

When you put the corrected pelvis
and manus on a reconstruction of Epidexipteryx hui (Fig. 4), you get a very basal bird, according to the large reptile tree (Fig 2). Note: nowhere in these sister taxa do you get any hint of a novel forelimb bone as imagined for Yi qi (Xu et al. 2015),but falsified here. 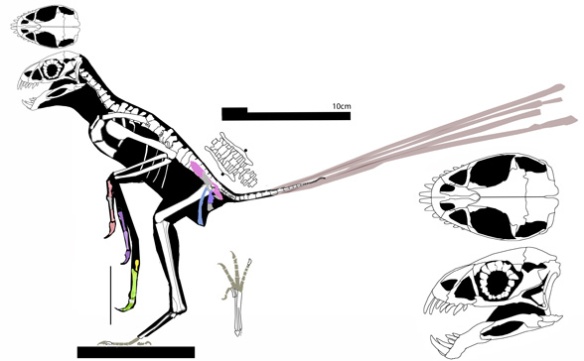 Figure 3. Epidexipteryx, another scansoriopterygid with a bird-like pelvis. Perhaps no one expected such a large finger 3 on such a little bird, but then… look at those teeth!

It is indeed odd
that taphonomy would randomly shift a bone over just enough in two related taxa to make it appear that a pubis was actually an ischium. Or that a giant finger would be placed to resemble a pubis. Or that two ischia would look like feathers.

That’s why it is so important
to test autapomorphies, to look more closely at problems and make comparisons to sister taxa. When you do, many autapomorphes will reveal themselves to be misidentified plesiomorphies, as we’ve seen here, here and here. However, the long third finger on both of these taxa distinguishes them from all other theropods.