Updated Feb 8, 2016 with a new nesting for this taxon, away from Herrerasaurus and towards a newly added taxon, Eodromaeus.

According to Wikipedia
“Barberenasuchus brasiliensis (Mattar 1987; Fig. 1) is an extinct genus of an archosauriform. Fossils (poorly preserved skull and axis vertebra) have been found from the Santa Maria Formation of southern Brazil of Late Triassic age. Its phylogenetic position within Archosauriformes is uncertain; the author of its description classified it as a sphenosuchid crocodylomorph, while Kischlat (2000) considered it to be a rauisuchian. Irmis, Nesbitt and Sues (2013) stated that they “could not find any crocodylomorph character states preserved in the holotype specimen”. Based on the presence of an antorbital fenestra the [latter] authors assigned Barberenasuchus to Archosauriformes, but stated that without further preparation and study it is not possible to assign it to any specific archosauriform group.” 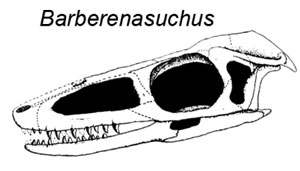 Figure 1. Barberenasuchus, the only data I was able to find, a small image in Riff et al. 2012.

In phylogenetic analysis
the line drawing (from Riff et al. 2012)  nests Barberenasuchus with the protodinosaurs Junggarsuchus, Pseudhesperosuchus and Carnufex in the large reptile tree. Tradtiional paleontologists consider these sphenosuchid basal crocs. So did Riff et al.

It’s pretty obvious at first glance, isn’t it? The odd sort of postorbital that rises in a dorsal arc lateral to a crested parietal is a dead giveaway for this clade. No other reptiles have it. Compare this drawing of Barberenasuchus to Pseudhesperosuchus here.

Unfortunately,
the line drawing does not do justice to a jpeg of the fossil itself (Fig.2, courtesy of D. Riff). That ‘odd sort of’ postorbital turns out to be not so odd. There is no parietal crest. 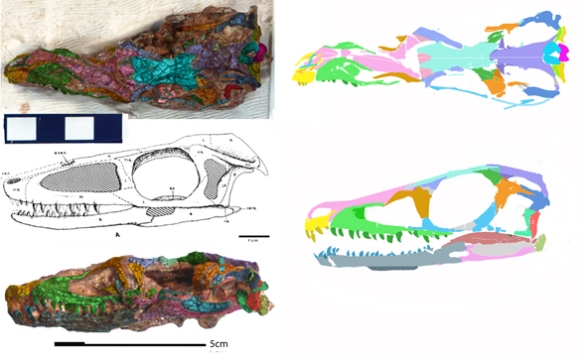 Figure 1. Barberenasuchus traced using DGS color over the bones, then transferred and shifted to recreate the in vivo skull in two views. Click to enlarge. Note the parietal does not produce a crust, but is flat. The maxilla ventral rim is convex. The postorbital does not have an acute curve, but standard  right angle shape. Both the lacrimal and postorbital were split longitudinally during taphonomy. All of the bones are cracked, making sutures hard to distinguish. This specimen is a sister to Herrerasaurus in the large reptile tree, based on this skull material, but note the lack of a lateral flange of the nasal.

Distinct from most of its sisters (Fig. 3) Barberenasuchus has shorter teeth and a larger orbit. The skull is more gracile, and smaller in size. The rostral tip is not reinforced with laminated bone layers, as in Herrerasaurus or a lateral flange of the nasal, as in other basal dinosaurs, so Barberenasuchus is more plesiomorphic and therefore closer to the basalmost dinosaur. By contrast, look at the nasal of Eoraptor (Fig. 3) and Tawa which compares closely to that of Herrerasaurus. So the Barberenasuchus nasal is similar to that of the protodinosaurs while Herrerasaurus is similar to other dinosaurs.

Figure 3. Barberenasuchus to scale with sister taxa, Herrerasaurus, Eoraptor, Lewisuchus and Trialestes and Junggarsuchus, but without the autapomorphies of its sister Herrerasaurus. At present Barberenasuchus is the basalmost dinosaur. Note the difference in the nasal between the dinosaurs and protodinosaurs.

Bottom line:
Barberenasuchus does not look like any true crocodylomorph (agreeing with Irmis, Nesbitt and Sues, i.e. no anterior leaning quadrate/quadratojugal contacting the postorbital) because it is a basal dinosaur, a small (juvenile?) sister to Herrerasaurus. Barberenasuchus does not have a nasal that extends to the base of the naris, distinct from all other dinosaurs and similar to the protodinosaurs, like Junggarsuchus.

Figure 3. The Dinosauria subset of the large reptile tree as of February 5, 2016. Here Proceratosaurus nests with several former long-snouted tyrannosaurs now closer to spinosaurs and allosaurs.

Too bad
this taxon was not known here when building my ‘Origin of Dinosaurs’ video. It would have been a featured taxon.