Earlier we looked at a new diapsid, Pappochelys (Schoch and Sues 2015, Fig. 1), touted as a basalmost turtle nesting along with Odontochelys.

Unfortunately
Pappochelys nested in the large reptile tree with basalmost placodonts, like Palatodonta and Majiashanosaurus. That nests it far from turtles and their kin.

Today
we’ll see if we can get Pappochelys to nest with turtles by taxon deletion (step-by-step removal of all putative sister taxa). 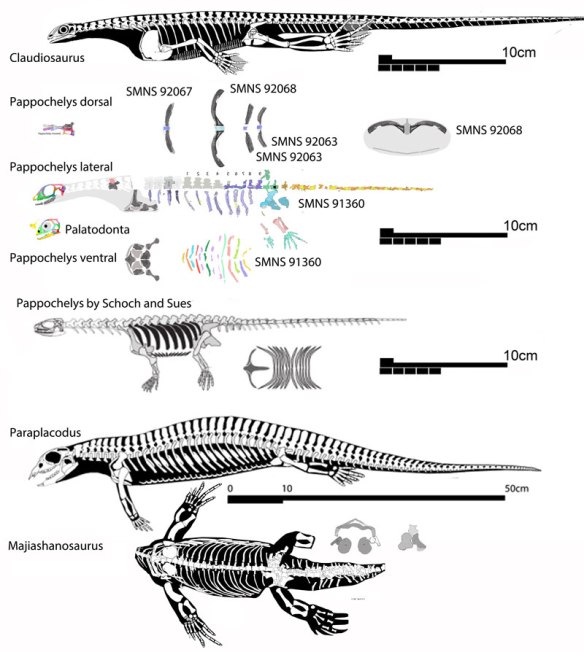 Figure 1. Pappochelys compared to placodont sister taxa and compared to the Schock and Sues reconstruction, which appears to have several scale bar errors and underestimated the number of dorsal vertebrae. Click to enlarge. So few ribs and vertebrae are known for Pappochelys that their order, size and number could vary from that shown here. Note the ribs of Paraplacodus are also expanded. The number of dorsal vertebrae is unknown and probably more than nine based on sister taxa.

If we remove
200+ of the closest known sisters to Pappochelys, extending those deletions to half of the large reptile tree, where do you think Pappochelys will nest?

For some reason,
perhaps due to its diapsid temporal region, the basal placodont, Pappochelys nests with long-necked tritosaur, Tanystropheus, when 200+ of its otherwise closest known sisters are deleted. That’s a classic ‘by default’ nesting.

Take away all of the tritosaurs
and Pappochelys nests at the base of the Sphenodontia/lepidosauria.

So Pappochelys resists nesting with turtles, given several grand opportunities to do so. It is morphologically that different. Pappochelys would rather nest with a long list of other taxa than nest with turtles.