Earlier we looked at the origin of the antorbital fenestra in archosauriforms and the early radiation of that clade in the Late Permian as demonstrated by a series of skulls. Several Late Permian Youngina and Youngoides specimens preceded several Early Triassic Proterosuchus specimens and Euparkeria at the base of the Archosauriformes in the large reptile tree.

A recent online paper
by Bernardi et al. (2015) presented a holistic approach to the study of early archosauriform evolution by integrating body and track records supporting a Late Permian – Early Triassic radiation. The skeletal record is largely Triassic for this clade. Only Archosaurus and a few other taxa are known from the Late Permian. The ichnite record provides evidence for an erect posture in the Late Permian. This is all very reasonable and well-documented,

Unfortunately
the Bernardi team is still using an outdated tree topology (Fig. 1) in which tanystropheids and mesosuchids nest as basal archosauromorphs not far from lepidosauromorphs.

In the large reptile tree, based on a dataset of many more taxa, the last common ancestor of archosauromorphs and lepidosauromorphs is Gephyrostegus bohemicus, a basal amniote.

There are other problems elsewhere on the Bernardi tree, as they nest crocs with rauisuchians and phytosaurs basal to avemetatarsalians (which includes the lepidosauromorph pterosaurs at its base). We’ve talked about the ‘by default’ nesting of phytosaurs close to pterosaurs earlier. A long list of workers need to look more closely at their cladograms for such ‘strange bedfellow’ problems, typically due to taxon exclusion. Evolution works gradually and all cladograms should provide a valid, tested, gradual accumulation of traits among all included taxa. 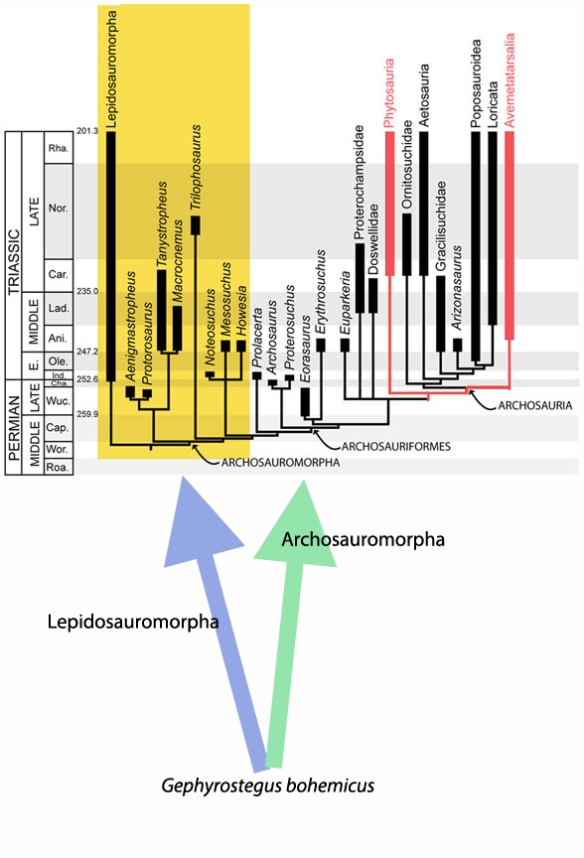 Figure 1. The Bernardi et al. tree (in shades of gray) with color added to show the lepidosauromorphs of the large reptile tree, the invalid sisterhood of phytosaurs and avemetatarsalians, and, at bottom, a simplified tree topology of lepidosaurmorphs and archosaurormorphs arising from Gephyrostegus

Here we’ve already looked at Early Permian scleroglossan lepidosaurs and Late Permian protosquamates. When you add taxa (now up to 555 in the large reptile tree) you can trace the ancestry of archosauriforms back to basal tetrapods. You find that mammals, ichthyosaurs and placodonts are more closely related to archosaurs than lizards are.

One note that did catch my interest
was the scaly pattern on the ichnite. Scalation is rarely preserved along with fossils or footprints, so this is a rare find. Cheirotherium tracks have been matched to Ticinosuchus (Fig. 3). 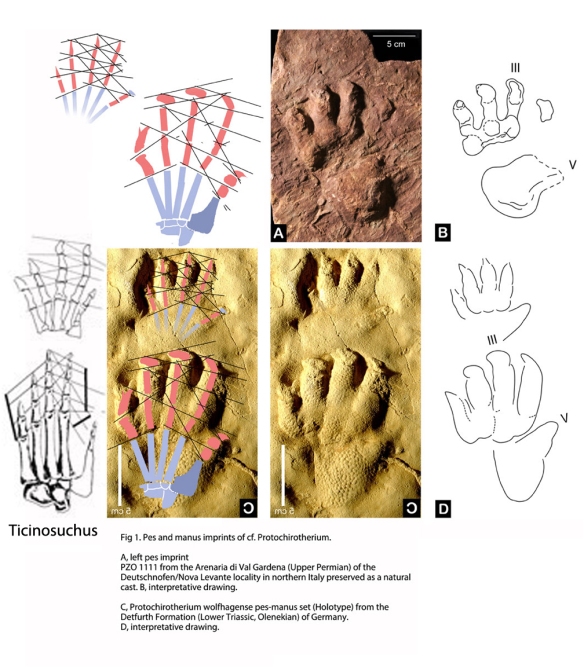 Figure 2. Late Permian ichnites, Protochirotherium, matched here to Ticinosuchus. Click to enlarge. Note the scalation on the lower image. Ticinosuchus is an armored archosauriform. Note the longer toes in the ichnite. Interesting twist to the unguals here as they were the last foot parts to leave the substrate.

Ticinosuchus had an erect carriage (Fig. 3), as the Late Permian ichnites indicate, but body fossils are known only from the Middle Triassic. Obviously the ichnites were closer to the origin of the clade, while the body fossils represent a wider radiation or the dying days of the taxon.

By contrast, a traditional Middle Triassic Cheirotherium ichnite (Fig. 4) appears to presage dinosaurs (Fig. 5) with the reduction and rotation of the two lateral manual digits along with the reduction of digits 1 and 5 of the pes. Mechanically the lateral rotation of manual digits 4 and 5 remove them from contributing and/or reduce their contribution to forward propulsion. 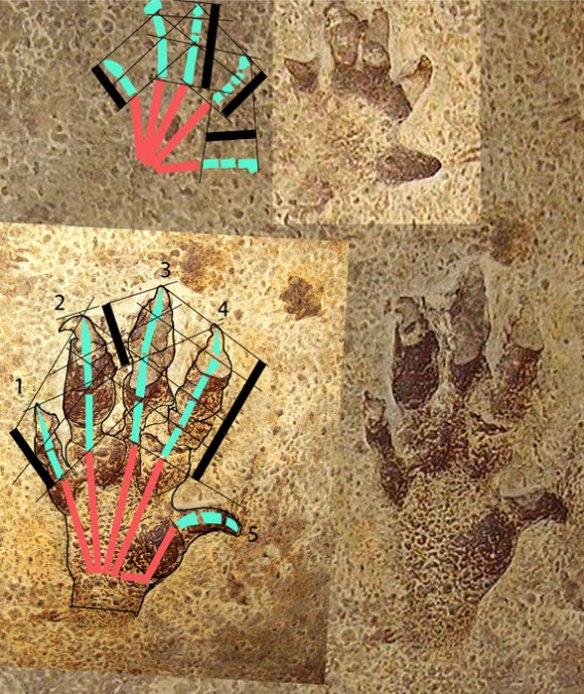 Figure 4. Cheirotherium right manus and pes track with PILs added from the Middle Triassic. The manus is digitigrade. By comparison to the Late Permian track, this one seems more distinct from Ticinosuchus. Here the reduction of manus digits 4 and 5 along with pedal digits 1 nod 5 presage basal dinosaur morphology.

Basal dinosaurs and pre-dnosaurs, represented here by Herrerasaurus (Fig. 5) and the PVL4590 specimen, are also close to the traditional Cheirotherium trackmaker.

Figure 5. Herrerasaurus and the PVL4597 pes compare well with the traditional Middle Triassic Cheirotherium track, but the track is more primitive.

And it’s also worthwhile,
while we’re at it, to compare the traditional Cheirotherium track (Fig. 4) to Gracilisuchus (Fig. 6), which nests between Ticinosuchus and pre-dinosaurs, but definitely closer to the croc lineage based on the absence of pedal digit 5 and other traits. 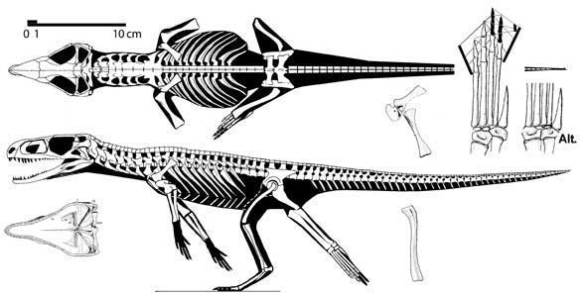 The Bernardi et al. study confirms our and other earlier studies that archosauriforms had their origin and early radiation in the Late Permian. Let’s hope that someday they get a larger taxon list to get their tree topology right.