Sorry to have to report this, but…
Witton (2015) decided that certain published literature (data and hypotheses listed below) germane to his plantigrade, quadrupedal, basal pterosaur conclusions, should be omitted from consideration and omitted from his references.

Everyone knows, iI’s always good practice
to consider all the pertinent literature. And if a particular observation or hypothesis runs counter to your argument, as it does in this case, your job is to man up and chop it down with facts and data. That could have been done, but wasn’t. Instead, Witton put on his blinders and pretended competing literature did not exist. Unfortunately that’s a solution that is condoned by several pterosaur workers of Witon’s generation.

Not the first time inconvenient data
has been omitted from a pterosaur paper. Hone and Benton (2007, 2008) did the same for their look into pterosaur origins after their own typos cleared their way to delete from their second paper one of the two competing candidate hypotheses.

Witton (2013) and Unwin (2005) did the much the same by omitting published papers from their reference lists that they didn’t like.

Publication
is a great time to show colleagues that you have repeated all competing observations and experiments and either you support or refute them. To pretend competing theories don’t exist just increases controversy and reduces respect.

So, what’s this new Witton paper all about?

From the Witton abstract: “Pterodactyloid pterosaurs are widely interpreted as terrestrially competent, erect-limbed quadrupeds, but the terrestrial capabilities of non-pterodactyloids are largely thought to have been poor (false). This is commonly justified by the absence of a non-pterodactyloid footprint record (false according to Peters 2011), suggestions that the expansive uropatagia common to early pterosaurs would restrict hindlimb motion in walking or running (false), and the presence of sprawling forelimbs in some species (not pertinent if bipedal).

“Here, these arguments are re-visited and mostly found problematic. Restriction of limb mobility is not a problem faced by extant animals with extensive fight membranes, including species which routinely utilize terrestrial locomotion. The absence of non-pterodactyloid footprints is not necessarily tied to functional or biomechanical constraints. As with other fully terrestrial clades with poor ichnological records, biases in behaviour, preservation, sampling and interpretation likely contribute to the deficit of early pterosaur ichnites. Suggestions that non-pterodactyloids have slender, mechanically weak limbs are demonstrably countered by the proportionally long and robust limbs of many Triassic and Jurassic species. Novel assessments of pterosaur forelimb anatomies conflict with notions that all non-pterodactyloids were obligated to sprawling forelimb postures. Sprawling forelimbs seem appropriate for species with ventrally-restricted glenoid articulations (seemingly occurring in rhamphorhynchines and campylognathoidids). However, some early pterosaurs, such as Dimorphodon macronyx and wukongopterids, have glenoid arthrologies which are not ventrally restricted, and their distal humeri resemble those of pterodactyloids. It seems fully erect forelimb stances were possible in these pterosaurs, and may be probable given proposed correlation between pterodactyloid-like distal humeral morphology and forces incurred through erect forelimb postures. Further indications of terrestrial habits include antungual sesamoids, which occur in the manus and pes anatomy of many early pterosaur species, and only occur elsewhere in terrestrial reptiles, possibly developing through frequent interactions of large claws with firm substrates. It is argued that characteristics possibly associated with terrestrially are deeply nested within Pterosauria and not restricted to Pterodactyloidea as previously thought, and that pterodactyloid-like levels of terrestrial competency may have been possible in at least some early pterosaurs.”

Witton writes: “Given that likely pterosaur outgroups such as dinosauromorphs and Scleromochlus bore strong, erect limbs (e.g.,Sereno, 1991; Benton, 1999), it is possible that these early pterosaurs retained characteristics of efficient terrestriality from immediate pterosaur ancestors.”

Wrong as this ‘given’ supposition is, both of the above taxa (dinos and scleros) are bipedal, yet Witton refuses to consider this configuration in basal pterosaurs (for which he claims have no ichnite record). 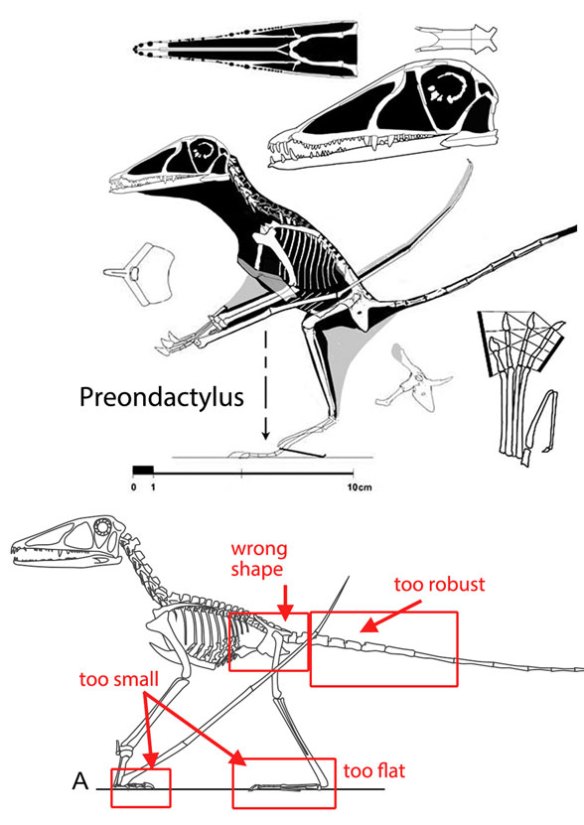 Figure 1. Witton’s errors with a quadrupedal Preondactylus. For a study on terrestrially, there is little effort devoted to the feet of pterosaurs here. Click to enlarge.

Digitigrady vs. plantigrady
Pterosaur feet come in many shape and sizes. Some have appressed metatarsals. Others spread the metacarpals. These differences were omitted by Witton. Some have a very long pedal digit 5. Others have a short digit 5. These differences were also omitted. Some pterosaurs were quadrupeds (but not like Witton imagines them), others were bipeds (Figs. 1-6). Basal pterosaurs had a butt-joint metatarsi-phalangeal joint, but that just elevates the proximal phalanges, as confirmed in matching ichnites. 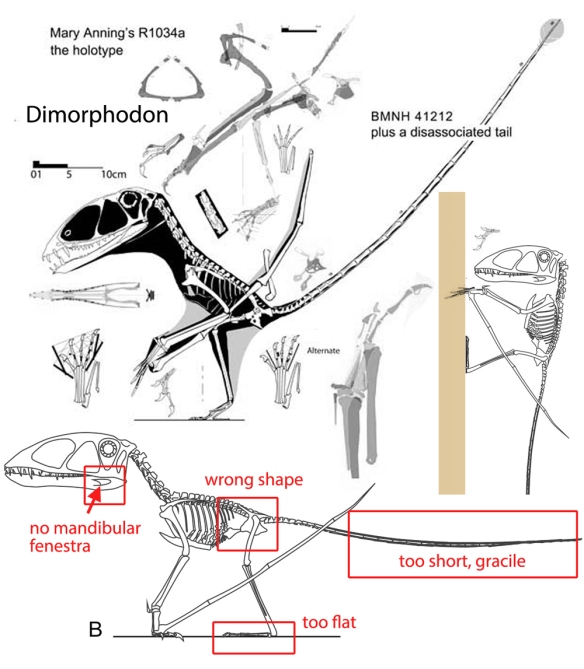 The quadrupedal hypothesis is a good one,
but it really only works in short-clawed plantigrade clades that made quadrupedal tracks on a horizontal substrate. Otherwise a quadrupedal configuration works only on vertical surfaces, like tree trunks, where the trenchant manual claws can dig into the bark. This was omitted by Witton. 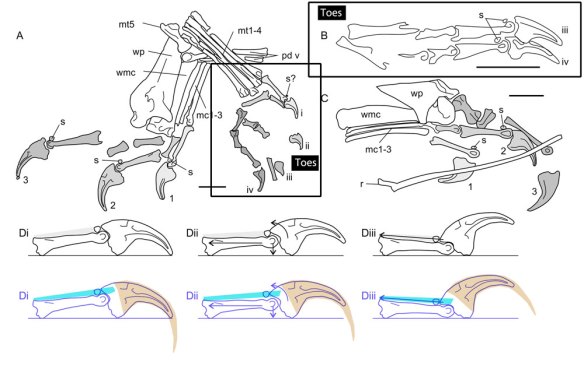 Figure 3. Dimorphdon toes and fingers. Here, in color, I added the keratinous sheath over the claws that show how ridiculous it would be for Dimorphodon to grind these into the ground. Better to use those on a vertical tree trunk (figure 2). Click to enlarge. 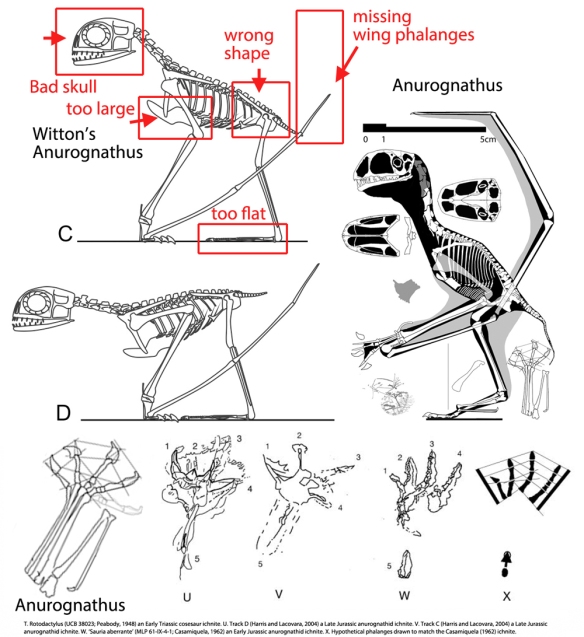 Figure 4. Anurognathus by Witton along with an Anurognathus pes and various digitigrade anurognathid ichnites, all ignored by Witton. Digit 5 behind the others is the dead giveaway.

Quadrupedal pterosaurs can’t open their wings
whenever they want to, for display or flapping. Witton favors the forelimb launch hypothesis for pterosaurs of all sizes, forgetting that size matters. 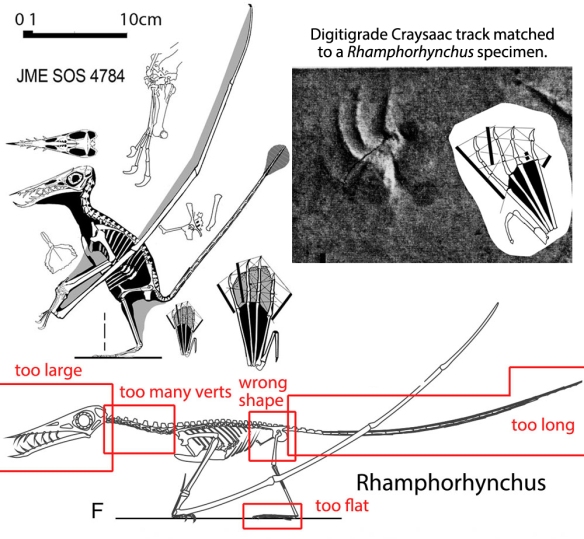 Figure 5. Quadrupedal Rhamphorhynchus by Witton (below) with errors noted and compared to bipedal alternative.

Pterosaurs were built for speed
whether on the ground or in the air. They were never ‘awkward.’ Remember basal forms have appressed metatarsals, they have more than five sacrals, their ichnites are digitigrade, the tibia is longer than the femur, the bones are hollow, when bipedal the feet plant below the center of balance at the wing root, and some pterodactyloid tracks are bipedal. 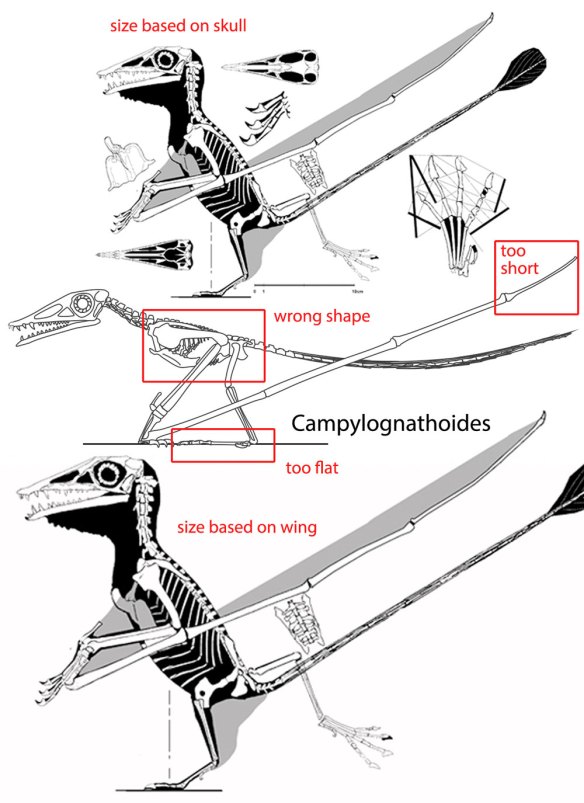 Figure 6. Quadrupedal Campylognathoides by Witton (center) with errors noted and compared to bipedal alternatives. The lack of accuracy in Witton’s work borders on cartoonish.

Accuracy trumped by imagination
By the present evidence, Witton has not put in the effort to create accurate and precise pterosaur reconstructions. Rather his work borders on the cartoonish and I suspect the reconstructions have been free-handed with missing or enigmatic parts replaced with parts from other pterosaurs. That should be unacceptable, but currently such shortcuts are considered acceptable by Witton’s generation of pterosaur workers.

The Sordes uropatagium false paradigm gets a free pass
and no critical assessment from Witton. (So far this uropatagium has been observed only in one specimen, Sordes (in which a single uropatagium Witton believes was stretched between the two hind limbs), was shown to be an illusion caused by bone and membrane dislocation during taphonomy. All other pterosaurs and their predecessors have twin uropatagia that do not encumber the hind limbs. The dark-wing Rhamphorhynchus (Fig. 5) is an example of a basal pterosaur with twin uropatagia.