Recent papers by Ezcurra and Butler (2015) and Welman (1998) purported to show a growth series in Proterosuchus (Fig. 1; Broom 1903) using a number of small to large skulls. Anyone can see why these authors thought these two skulls could be samples from a growth series. But is that what these skulls truly represent? After all, the only way to become a giant proterosuchid is to evolve over hundreds of generations from an original pair of small proterosuchids (Figs. 2, 3). 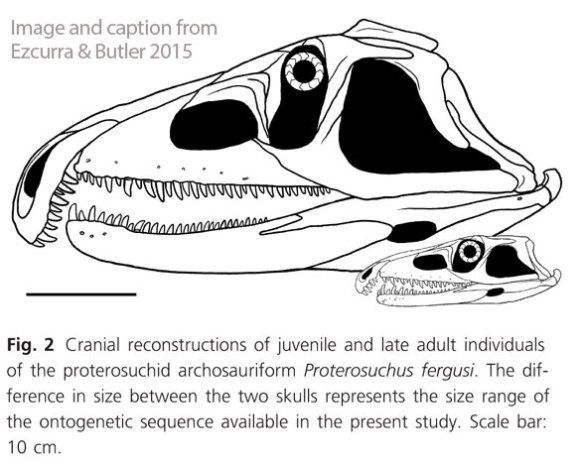 Figure 1. Two proterosuchid skulls which Ezcurra and Butler report represent a juvenile and adult. That hypothesis is not supported by phylogenetic analysis. Compare these images to RC96 and RC59 in figure 3. 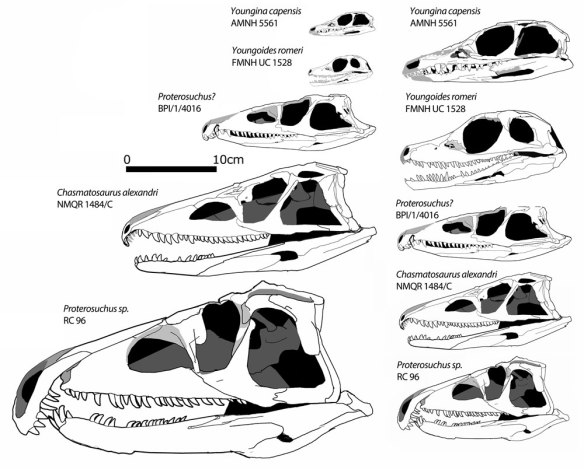 Figure 2. The origin and evolution of Proterosuchus based on skulls. On the left to scale. On the right to the same length. What you’re seeing here is the evolutionary steps taken to produce the large RC96 skull. You have to start somewhere, and here you can start with the AMNH 5561 specimen of Youngina.

Bottom line:
Despite their size differences, all of the Proterosuchus skulls in figures 1-3 are adults, or at least they can be scored as adults.

Figure 3. The many faces of Proterosuchus to scale and in phylogenetic order, among with their closest known relatives. Note the phylogenetic enlargement, phylogenetic miniaturization, reduction of the drooping premaxilla and loss of the antorbital fenestra after the TM 201 specimen of Chasmatosaurus. Click to enlarge. Yes there are two choristoderes related to the tiny BPI 2871 specimen wrongly attributed to Youngina. Moving the BPI 2871 closer to Youngina and the Choristodera adds 30 steps, so it appears that the antorbital fenestra disappeared in this lineage.

I’m not sure if we know
what a juvenile Proterosuchus specimen looks like. I don’t think we’ve found one yet. My guess is it will look like and phylogenetically nest with a specific adult, only smaller, as in pterosaurs and other reptile taxa. To that point, the smallest putative Proterosuchus specimen shown here (Fig. 3), RC 59, (formerly considered Elaphrosaurus), phylogenetically nests as a derived proterosuchian. At it nests with an even smaller little archosauriform, BPI 2871, formerly referred to Youngina. So the littlest Proterosuchus is not a juvenile, as imagined by Ezcurra and Butler. Rather RC 59 is going through phylogenetic miniaturization and it is not done shrinking.

By the way we can be pretty confident about these nestings because the taxon list has grown to 540+ taxa.

You might find this fascinating..
Everyone who sees a Proterosuchus skull must think, “That odd premaxilla drooping snout…that has to belong to a terminal taxon. What could possibly evolve from that?” Well, apparently the answer is: “a long list of taxa,” which you already know and we’ll meet in future blog posts. Some hints as to the identify of those taxa are in figure 3 and at reptileevolution.com. That premaxilla doesn’t stay so long and droopy in descendant taxa, perhaps due to neotony.

And one more thing…
The skulls of Proterosuchus and Chasmatosaurus are not shaped differently because they were crushed during burial in different directions. No, what you see is what you get. And it all appears to fit together in the tree of life — without any a priori assumptions as to relative ontogenetic age.

The many faces of Proterosuchus and Chasmatosaurus
have been perplexing, but phylogenetic analysis puts everything in order. Let’s get this problem behind us. Please encourage paleontologists to run all their taxa through analysis before assuming any are juveniles.

2 thoughts on “The many faces of Proterosuchus: not a growth series”