Skip to primary content
A new paper by Longrich et al. (2015) discusses the worldwide distribution of burrowing skinks versus their fossil record, which, in their study, extends no deeper than the Cretaceous extinction event. With this data they imagine that burrowing skinks must have rafted over the oceans between the continents to aid in their dispersal.

From their abstract
“Worm lizards (Amphisbaenia) are burrowing squamates that live as subterranean predators. Their underground existence should limit dispersal, yet they are widespread throughout the Americas, Europe and Africa. This pattern was traditionally explained by continental drift, but molecular clocks suggest a Cenozoic diversification, long after the break-up of Pangaea, implying dispersal. Here, we describe primitive amphisbaenians from the North American Palaeocene, including the oldest known amphisbaenian, and provide new and older molecular divergence estimates for the clade, showing that worm lizards originated in North America, then radiated and dispersed in the Palaeogene following the Cretaceous-Palaeogene (K-Pg) extinction. This scenario implies at least three trans-oceanic dispersals: from North America to Europe, from North America to Africa and from Africa to South America. Amphisbaenians provide a striking case study in biogeography, suggesting that the role of continental drift in biogeography may be overstated. Instead, these patterns support Darwin and Wallace’s hypothesis that the geographical ranges of modern clades result from dispersal, including oceanic rafting. Mass extinctions may facilitate dispersal events by eliminating competitors and predators that would otherwise hinder establishment of dispersing populations, removing biotic barriers to dispersal.”
Unfortunately
Longrich et al. did not include the derived (i.e. not primitive) Early Jurassic burrowing skink, Tamaulipasaurus (Clark and Hernandez 1994, Fig. 2), in their data. Tamaulipasaurus nests as a sister to Bipes and Amphisbaena the most derived burrowing skink. That means burrowing skinks had just about ceased producing novel morphologies by the Early Jurassic, 165 mya. That means burrowing skinks could have dispersed throughout the supercontinent of Pangaea prior to its breakup around 130 mya and no burrowing skinks would have to raft the oceans. 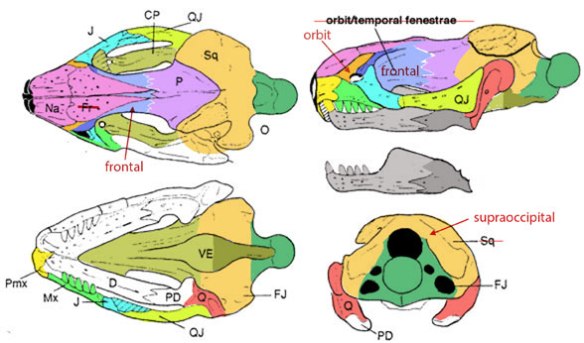 Figure 2. Tamaulipasaurus, a burrowing skink from the Early Jurassic, long before the breakup of Pangaea. Clark and Hermandzz identify that foramen as an orbit. It may be misidentified with a confluent orbit and temporal fenestra as in Bipes.

To make matters worse,
Ascendonanus (Rößler et al. 2012, Fig. 3) is an Early Permian iguanid, one of the oldest lepidosaurs known, and varanids are not basal taxa, but are as derived as skinks on the large reptile tree.

Figure 3. The skull of Ascendonanus has a diapsid temporal configuration with clearly visible upper temporal fenestra and a typical iguanid skull morphology.

And then there’s Cosesaurus
a derived tritosaur, a clade of lepidosaurs that developed in parallel with squamates but had their heyday (widest radiation) in the Triassic.
Remember,
when you find a fossil, it probably represents one of millions at the height of that species radiation, rather than at the origin or the demise, when very few of that species are alive. So given the present phylogenetic and chronological bracketing the fossil record for burrowing skinks probably extends much further back in time than Longrich et al. surmise, evidently back to the Early Permian or Late Pennsylvanian.
References
Clark JM and Hernandez RR 1994. A new burrowing diapsid from the Jurassic La Boca formation of Tamaulipas, Mexico, Journal of Vertebrate Paleontoogy 14: 180-195.
Longrich NR, Vinther J, Pyron RA, Pisani D and Gauthier JA 2015. Biogeography of worm lizards (Amphisbaenia) driven by end-Cretaceous mass extinction.
Proceedings of the Royal Society B: 2015 282 20143034 DOI: 10.1098/rspb.2014.3034. http://rspb.royalsocietypublishing.org/content/282/1806/20143034
Rößler R, Zierold T, Feng Z, Kretzschmar R, Merbitz M, Annacker V and Schneider JW 2012. A snapshot of an early Permian ecosystem preserved by explosive volcanism:
New results from the Chemnitz Petrified Forest, Germany. PALAIOS, 2012, v. 27, p. 814–834