On YouTube the American Museum of Natural History (AMNH) has placed two new pterosaur take-off sequences in their video, “Meet the Paleontologists,” part of last year’s pterosaur exhibit. One snippet features Jeholopterus (Fig. 1) and the other features Quetzalcoatlus (Fig. 2). Both purport to demonstrate the forelimb take-off method that Mike Habib’s team present here and I critiqued here and here.

IMHO, pterosaurs, like birds used multiple downbeats of their powerful wings to create thrust and lift as shown here.

Th AMNH snippets takes the opposite tack,
that pterosaurs used their folded forelimbs to push them off the ground, supposedly, but not quite like a vampire bat, (no height is generated at lift-off) and fractions of moments later, they unfold their wings and glide upward (!!!), evidently tossing out the effects of gravity and drag and the need to add thrust, forward momentum and airspeed. The originator of this hypothesis, Mike Habib, appears in the AMNH video. So I assume he had some input. I can’t image that Mike would approve these, as they break several rules of physics, as noted above.

Because the camera moves
in each animation, in both video snippets frames were realigned to remove that camera movement. If you’ve read this far without seeing the videos, refresh the page to start them over.

GIF movie 1. Jeholopterus. Each frame is 5 seconds and there are 7 frames. Click to enlarge and animate if necessary. It recycles only once. As this movie starts with the page opening, you may wish to refresh the page.

The animated Jeholopterus (GIF move 1)
does not leap skyward with its spring-like forelimbs then unfold its wings like a vampire bat. Rather it simply leans forward off the rock with hind limb thrust, glides while unfolding its big wings then produces an upbeat before a downbeat. Not sure how it managed to rise during the upbeat. It must be a bubble in a breeze. All that thrust prior to the first downbeat had to come from the original hind limb push-off, but they gave Jeholopterus such puny legs. Nothing here makes sense.

GIF movie 2. As this movie starts with the page opening, you may wish to refresh the page. Quetzalcoatlus take off. Each frame is 5 seconds. 7 frames total. Recycles once. Click to animate and enlarge if necessary. Here the giant animal appears to rise and accelerate without one downbeat of its wings. Watch the shadow to see where the wings are in the middle frames.

In the Quetzalcoatlus movie (GIF movie 2
there is indeed a recoil prior to takeoff, but once again the leap doesn’t elevate the pterosaur. Rather the pterosaur again appears to be light as a bubble as it rises only after opening its wings without a downbeat, then accelerates and rises. Where does all this thrust come from?

In the alternate hypothesis
(Fig. 3), Quetzalcoatlus flaps its wings while gaining airspeed with its legs, as in many large birds. So plenty of airspeed is generated from both sets of limbs and the wings are already extended and beating like crazy prior to takeoff.

Figure 1. Quetzalcoatlus running like a lizard prior to takeoff. Click to animate. The difference between this wing in dorsal view and the wing in figure 2 come down to the angle between the bones.

Key to the AMNH pterosaur problems
is their inability to imagine pterosaurs getting up on their hind limbs and standing bipedally to flap their wings like birds. Yet if they did their reconstructions in strict accordance with the bones they would find that pterosaurs could balance themselves on their hind limbs — even those that left quadrupedal imprints. We know this because their feet extended as far forwards as their center of balance, at the wing root, their shoulder joints — even those that walked quadrupedally. Pterosaurs were quite capable in every mode they found themselves in, from flying, to walking, to swimming. They weren’t awkward, as commonly portrayed.

The second problem with the AMNH animations
is their lack of faith in the thrust of the each downbeat of the wing. Bats do it. Birds do it. Why not let pterosaurs do it? Pterosaurs had to toss down a lot of air to get airborne, especially when they did not have sufficient forward airspeed to generate lift with Bernoulli’s principle. No matter how hollow their bones are, pterosaurs are not bubbles! 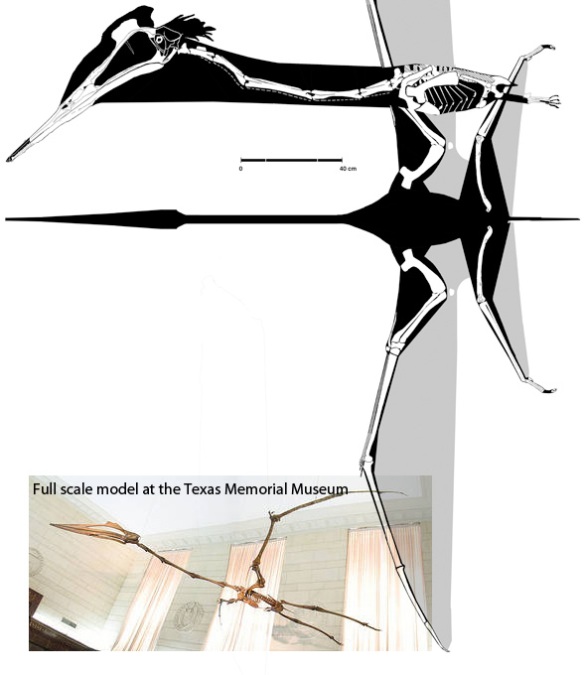 Figure 2. Quetzalcoatlus in dorsal view, flight configuration. The hind limbs were not uselessly trailing. They were extended laterally acting like horizontal stabilizers on an airplane — and they contributed to lift, but not thrust.

The third problem
is their lack of accuracy in their reconstructions. Beside the bone issues, the hind limbs should be extended laterally in flight where they contributed to lift and acted like horizontal stabilizers. The AMNH did not get the ‘blueprint’ right for either pterosaur. All they needed to do is pay attention to the details — and remember it takes a lot of power to overcome gravity.

Figure 3. Jeholopterus in dorsal view. Here the robust hind limbs, broad belly and small skull stand out as distinct from other anurognathids. Click to enlarge.

People are also bitching about the Jurassic World dinosaurs, but that’s a franchise that wants to sell merchandise and the original merchandise did not have feathers on their ‘raptors’. On the other hand, the AMNH is a museum. They should have the resources and experts to get things right in flight technique and morphology.