A recent paper by Diedrich (2015) purported to match the Arizonasaurus to giant Isochirotherium tracks from the Middle Triassic of Germany (Fig. 1).

The problem is,
no manus or pes are known for Arizonasaurus. Furthermore, all related taxa in the large reptile tree have digit 3 the longest, and all digits are elongate. The giant Isochirotherium tracks indicate that both digits 2 and 3 are the longest, and they are short. So matching candidates have to be found elsewhere, not close to Arizonoasaurus (although the size and time are right!).

Among the 504 taxa in the large reptile tree that are possible candidates with digits 2 and 3 the longest are Erythrosuchus (Fig. 1), Shansisuchus, Lotosaurus and the Postosuchus alisonae (Peyer 2008, Fig. 1). It turns out that only the latter is the best match when scaled up to the size of P. kirkpatrchicki (Chatterjee 1985, Fig. 1). 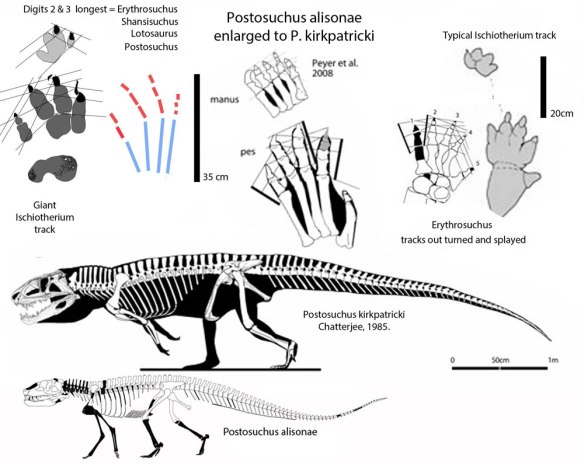 Figure 1. Giant Isochirotherium tracks matched to Postosuchus alisonae scaled up to the size of P. kirkpatrcki. Click to enlarge. This taxon was not considered originally because it is Late Triassic and the tracks are Middle Triassic.

Diedrich also saw the small manus tracks and assumed they were produced by a large poposaurid. Unfortunately, Arizonasaurus does not nest with poposaurids either. And poposaurids, other than Lotosaurus, do not match the track morphology.

It would have been helpful,
I suppose, to do what I did and make a list of possible candidates from a large list, AND THEN delete the possible candidates one by one as bad matches. Other than that phylogenetic bracketing mismatch, Diedrich does good work with excellent graphics. It took a leap of faith, I suppose to match tracks to a taxon for which no manus or foot is known.