Updated March 9, 2015 with the note that Sues et al. did not use suprageneric data,as reported earlier.. The supplemental data shows that several ornithischians were employed. I spent the day yesterday making the SuppData computer friendly and am today reviewing the scorings. I see several typos and reinterpretations. A later post will present both nexus files.

Earlier we looked at the palate and occiput of Daemonosaurus Today we’ll reexamine the cervicals and update some notes. 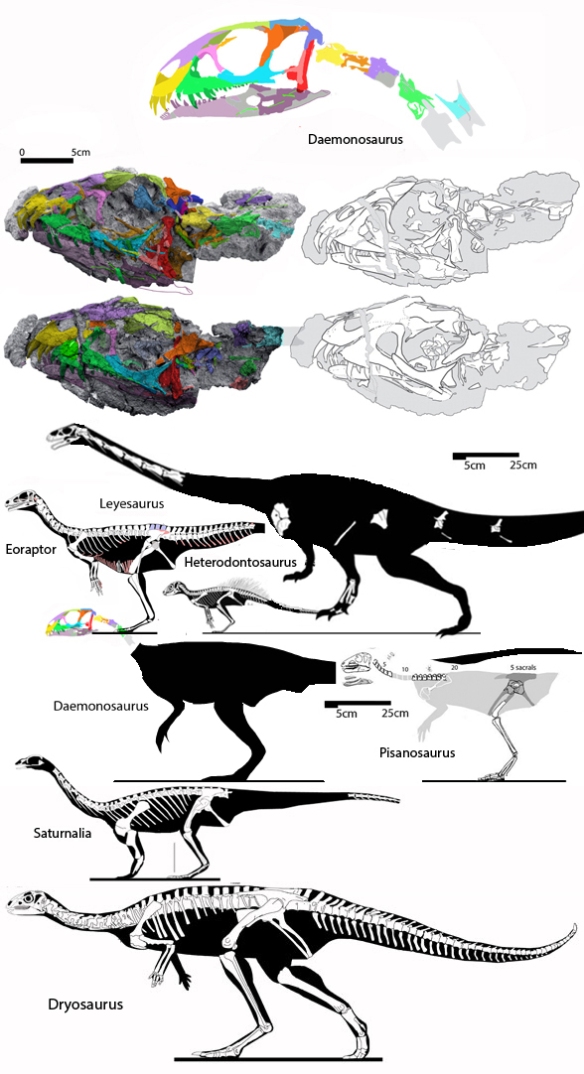 If the cervicals have been correctly traced
then, compared to sister taxa, Daemonosaurus has the largest skull relative to the most gracile cervicals. And there were likely four and a half more cervicals that were not preserved.

The cervicals are long, like those of basal sauropodomorphs, but the skull is tall, short and narrow, like those of basal ornithischians, like Heterodontosaurus. Overall the imagined body of Daemonosaurus was larger than all sister taxa except Leyesaurus, which had a longer neck. Note the similarities of Daemonosaurus to Pisanosaurus, which had much shorter cervicals, but was more closely related to other ornithischians, and to Dryosaurus, which also had shorter cervicals and no premaxillary teeth, but otherwise rather similar in morphology. 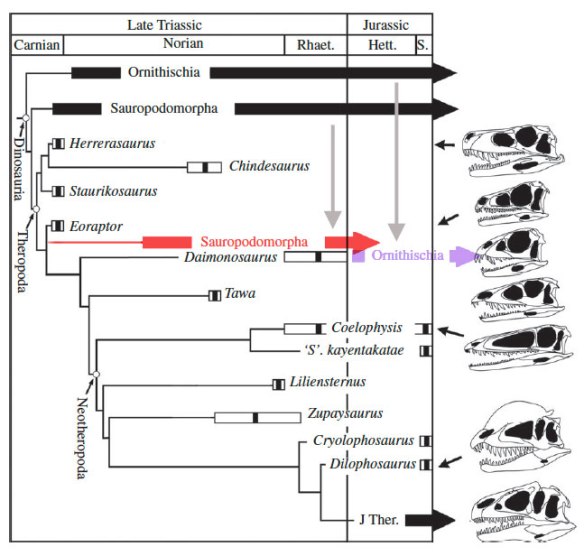 Figure 2. Daemonosaurus tree from Sues et al. 2014. Their one mistake was assuming sauropods and ornithischians branched off prior to Herrerasaurus. The large reptile tree has these clades branching off after Eoraptor. Delete those suprageneric clades and the tree recovered here matches the large reptile tree with similar deletions.

Daemonosaurus diagnosis (with my additions in color).
“Distinguished by the following unique combination of characters: skull proportionately deep and narrow (like Jeholosaurus, Heterodontosaurus = J, H), with short antorbital region (like J, H); premaxillary and anterior maxillary teeth much enlarged relative to more posterior maxillary teeth (like J, H); prefrontal large and occupies about 50 per cent of the dorsal margin of the orbit (like J, H); ventral process of lacrimal with slender posterior projection extending along anterodorsal margin of jugal (cannot confirm, this may be part of the jugal); dorsoventrally deep jugal with prominent lateral ridge (like H); postorbital with anterolateral overhang over orbit (like J, H); first two dentary teeth large and procumbent (like J, H); alveolar margin of dentary downturned at symphysis (like J, H); and third cervical vertebra with deep, rimmed, ovoid pleurocoel on the anterolateral surfaces of both centrum and neural arch (hard to see). Possible autapomorphies of Daemonosaurus include long posterior process of premaxilla that almost contacts anterior process of lacrimal (like J, H); and antorbital fenestra nearly the same size as external naris (like J, H);.”

It’s too bad
these authors missed this big, I mean really big discovery (the basalmost ornithischian!) due to their use of supragreneric taxa, false assumptions and taxon exclusion. It is also puzzling that no one since 2011 has raised their hand about these issues, except yours truly. Come on people, now that we know the problem, let’s fix this!

So, these questions pop up:
did the Ornithischia inherit short cervicals directly from a sister to Eoraptor? Or did basal phytodinosaurs enjoy a brief fling with elongate cervicals, as in the intervening sauropodomorphs — AND as demonstrated by Daemonosaurus? Or did Daemonosaurus independently elongate its cervicals?

That’s the frustration, joy and mystery of incomplete fossils.