Updated February 17, 2015 with the addition of several more turtle taxa to figure 5.

Earlier we looked at Odontochelys semitestacea, a primitive soft-shelled turtle with teeth (Li et al. 2008). The addition of the extant African soft-shelled turtle, Trionyx triunguis (Fig. 3) to the large reptile tree (Fig. 5), perhaps not surprisingly, nests it as a sister to Odontochelys and in doing so clarifies the reason why the carapace of Odontochelys consisted of neural plates only without osteoderms. By this evidence Odontochelys was a primitive soft–shelled turtle, AND, despite retaining teeth, was not THE basal turtle. Basal turtles must have radiated tens of millions of years earlier (see below). And all other turtle clades (like Elginia + Meiolania) independently and convergently lost their teeth.

Li et al. (2008) reported, “Here we describe a new 220-million-year-old turtle from China, somewhat older than Proganochelys, that documents an intermediate step in the evolution of the shell and associated structures.”

With this new nesting, apparently
turtles diverged into various clades long before the Late Triassic appearances of Odontochelys (Fig. 2), Proganochelys and Proterochersis (Fig. 1), each of which already has a distinct morphology.

Odontochelys may have retained teeth, but it was not a basal turtle. We can look back to Elginia in the Late Permian and perhaps Stephanospondylus of the Early Permian if we’re looking for clues to the origin of turtles with teeth. The latter was also basal to pareiasaurs like Anthodon and not far from Bolosaurus and Belebey.

Figure 2. Odontochelys is a basal soft-shell turtle with teeth and anterior elbows and extremely pronated forelimbs. 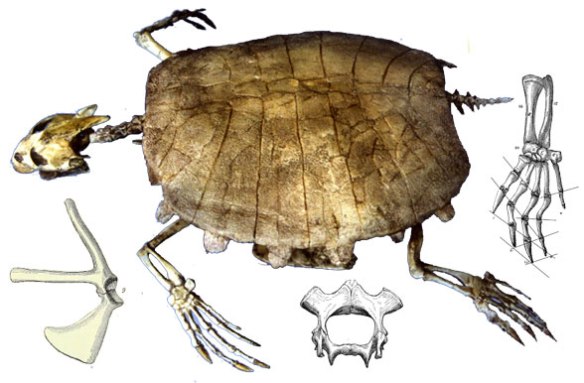 Figure 3 Trionyx, an African soft-shelled turtle with fossil relatives back to the Cretaceous nests with Odontochelys. With those long fingers, Trionyx was also not far from sea-faring turtles with flippers. Here the neural plates contact one another along their lengths, a more derived trait than seen in Odontochelys.

Comparing the two taxa, Odontochelys and Trionyx,
sheds light on the posterior emargination of the skull to facilitate jaw muscles in extant turtles like Trionyx. This is what makes extant turtle skulls so odd. It looks as though Trionyx has a lateral temporal fenestra behind the jugal. Actually that’s the result of the large posterior embayment of the parietals, along with the decay of the quadratojugal and squamosal to vestiges, altogether enlarging the post temporal fenestrae now filled with large jaw muscles. Take away that complex of temporal traits, and the the two skulls of Odontochelys and Trionyx share a suite of traits.

Figure 5. Turtle origin and early diversification with Odontochelys nesting as the sister to the soft-shelled turtle, Trionyx. More soft-shelled turtles will no doubt someday separate these two. Click to enlarge. This is a subset of the large reptile tree. Note Eunotosaurus is not close to turtles phylogenetically (contra Layson et al 2010), but developed similar ribs by convergence. 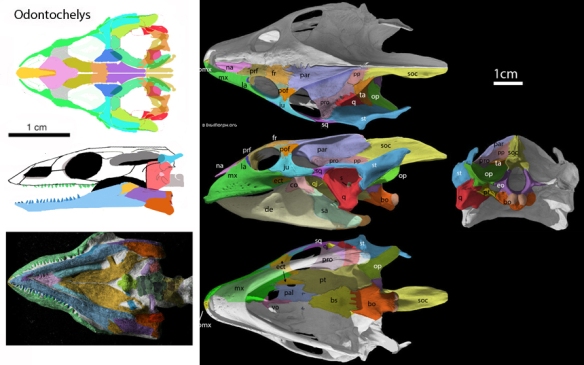 Figure 4. Like Odontochelys, the African soft-shelled turtle Trionyx has a longer snout and a round flat shell not ornamented with dermal ossicles. Click to enlarge. Both turtles retain supratemporals, postparietals and tabulars, but these bones fuse to others in the extant Trionyx, leaving only faint margins and sutures. Note the reduction of the lacrimal in Trionyx, the envagination of the temporal region, the reduction of the squamosal and quadratojugal, the elongation of the supraoccipital and the reduction of the internal naris. A large pineal opening is a legacy trait from bolosaurids and Elginia. The addition of more taxa will no doubt fill these gaps. Note the very tiny premaxilla in both taxa.

With its unusual temporal region, the skull of Trionyx is difficult to understand at first glance. So is the skull of Odontochelys, which has the additional disadvantage of being crushed. Soft-shelled turtle skulls reach the acme of oddness with Chitra indica (Fig. 8), the Indian narrow-headed soft-shell turtle, in which the eyeballs are placed on the skull where most tetrapods put their nostrils.

I asked the original authors
for high resolution images of the Odontochelys skull in order to prepare a more accurate reconstruction, but was told further preparation is underway. So, a  new paper is no doubt forthcoming from them on this same difficult subject.

The original reconstruction of the dorsal skull of Odontochelys (Fig. 7) makes it appear to be solid, like that of Proganochelys (Fig. 1). However, it is easy to see that there was a large pineal foramen there, the bones are not solid plates, and it is possible that temporal invagination had just begun. I’ll be eager to see what the authors come up with. What I present here must be considered as a preliminary attempt with vague data. We’ll compare notes later when their paper comes out.

When it comes to the palate, many of my interpretations do not jive with the original observations (Fig. 6). Unfortunately I cannot see very many mirror-image left/right bones here, other than the obvious nasals, vomers and pterygoids. However, like building a model airplane from scattered parts, the present interpretations do produce a reconstruction in accord with Trionyx, a taxon which also nearly matches Odontochelys post-cranially. 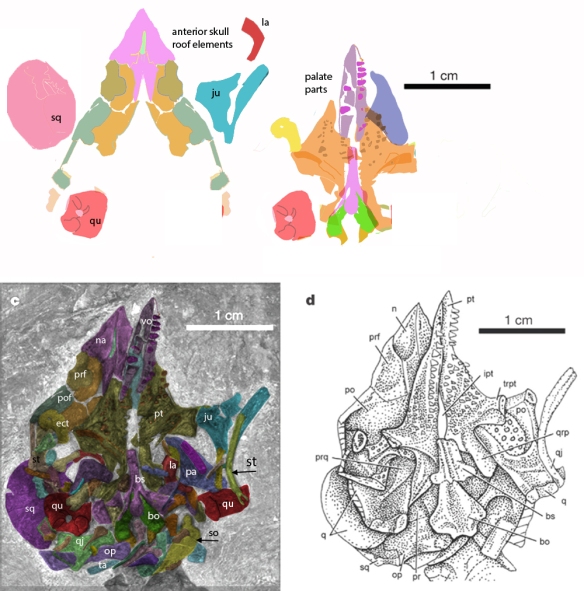 Figure 6. Reconstructing the palate of Odontochelys, part by part. Click to enlarge.

Here (Fig. 6) I’ve colorized and identified the crushed bones of the palate and skull roof in ventral view, then roughly reassembled them above. These elements were then used to create the present reconstruction (Fig. 2).

Here (Fig. 7) are additional materials used to create the reconstruction of Odontochelys in figure 2. Note the dorsal skull fossil appears to be partly decayed and splintered making bone identification difficult. Luckily many of the skull bones were recovered in other views. So the dorsal skull only had to contribute relatively few.

Note the parallel strips of bone at the posterior skull in dorsal view. I think this is an early appearance of the posteriorly projecting supraoccipital and thus an indicator of skull invagination, posterior embayment or both. We’ll see as better data comes in.

Figure 8. Chitra indica, the Indian narrow-headed soft-shell turtle (from Gaffney 1979). Red dots are above the orbits, where the eyeballs were. Note the large portion of skull devoted to jaw muscles here. This skull is straight out of ‘Alien. ‘