Updated February 15, 2015 with the addition of several basal snake taxa to the large reptile tree which united terrestrial and burrowing snakes in one clade, all derived from basal gekkotans.

Earlier we looked at the role of tiny Jucaraseps (Figs. 1, 4) and larger Adriosaurus (Fig. 1) in the origin of terrestrial snakes (remember burrowing snakes had a separate convergent origin with Lanthanotus according to the large reptile tree). Today, larger Aphanizocnemus  (Dal Sasso and Pinna 1997, Fig. 5) and much larger Pontosaurus (Kornhuber 1873, Fig. 2) and are added to the matrix (Fig. 2).

Pontosaurus has an extraordinarily long tail. The tail (= everything posterior to the cloaca) is shorter in snakes, and the torso is longer.

Figure 2. Pontosaurus and its parts. Data from Caldwell 2006. This is one of the last taxa we know in the snake lineage that still had a pectoral girdle.

The origin of snakes is not firmly understood or agreed upon
by established snake experts, but they’re pretty sure snakes arise from dolichosaurids.  These experts include Adriosaurus and Pontosaurus among these dolichosaurid varanids. Currently no snake expert considers the burrowing snakes as distinct and separate from the terrestrial and aquatic snakes and other phylogenetic analyses do not recover this topology (Fig. 3). To its credit, in this tree all sister taxa look very much alike and share a large number of traits without any large obvious gaps. 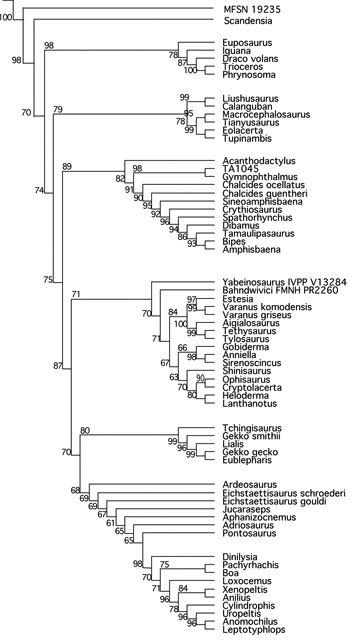 Figure 1. A subset of the large reptile tree focusing on squamates. Note snake ancestors are still sisters to basal geckos.

Living snakes are gekko sisters
Within the Squamata the legless trait occurred several times by convergence, including one within the geckos, Lialis. The latest data indicates that snake ancestors and gecko ancestors had a common ancestor separate from the varanids and helodermatids. That does not mean that snakes are geckos, or vice versa. Rather they shared a common ancestor that was not yet either. That ancestor was a sister to Tchingisaurus.

Figure 4. Snake ancestor skulls, Ardeosaurus, Eichstaettisaurus and Jucaraseps. Note the reduction of the premaxilla and the enlargement of the parietals. Click to enlarge.

Taking a look at
Ardeosaurus, Eichstaettisaurus and Jucaraseps (Fig. 4) illustrates how several features of the snake skull evolved, first through miniaturization as Jucaraseps is very tiny. The premaxilla gets smaller, the cranium gets longer, the posterior skull bones become smaller.

Aphanizocnemus (sometimes misspelled Afanizocnemus, Fig. 5) nests in the large reptile tree between Jucaraseps and Adriosaurus. Wikipedia reports, “It is a marine lizard that lived during the Late Cretaceous. It is often classified in the family Dolichosauridae as a close relative of snakes, although some studies have placed it as an even closer relative to snakes than dolichosaurids.”

Figure 5. Aphanizocnemus libanensis, previously considered a dolichosaur, here recovered between Jucaraseps and Adriosaurus. Prior snake studies did not include Jucaraseps, a key taxon. Click to enlarge. This taxon is about 12 inches or 30 cm long.

Pythonomorpha
Paleontologists are still not in agreement as to the origin of snakes. According to Wikipedia, “Pythonomorpha was originally proposed by paleontologist Edward Drinker Cope (1869) as a reptilian order comprising snakes and mosasaurs... and refers to the generally serpentine body plan of members of the group. The validity of Pythonomorpha remains debated however, indeed there is no consensus about the relationships of snakes or mosasaurs to each other, or to the rest of the lizards. An analysis by Conrad (2008) placed mosasaurs with varanoid lizards, and snakes with skinks. The most recent analysis, by Gauthier et al. (2012) suggests that mosasaurs are more primitive than either snakes or varanoids.”

Gauthier et al. 2012 nested Adriosaurus and Pontosaurus as sister to the mosasauroids Aigialosaurus and Tylosaurus. They also nested Scleroglossa and Tchingisaurus as the proximal outgroups to that combined clade and the Iguania as the proximal outgroup to that combined clade. So that study shares with this study an origin near the base of the Scleroglossa. Unfortunately Gauthier et al. nested snakes with Dibamus and other legless amphisbaenids, extremely derived taxa that the large reptile tree nests with skinks.

These new tree topologies arise by the addition of taxa and the reception of better data.

1 thought on “A new view on snake origins: snake ancestors were gecko sisters”