Revised February 11, 2019
with a new tracing and reconstruction of Cartorhynchus.

Figure 1. New tracing and reconstruction of the basal sauropterygian with flippers, Cartorhynchus.

Earlier (in early November 2014) we looked at the new discovery of Motani et al. (2014), Cartorhynchus (Fig. 1), which they recovered as an ichthyosaur ancestor, amphibious and a suction feeder. The paper was officially released by Nature (Motani et al. 2015) recently, hence the redux here.

Unfortunately
Like the Holy Roman Empire, Cartorhynchus is neither an ichthyosaur, amphibious nor a suction feeder. 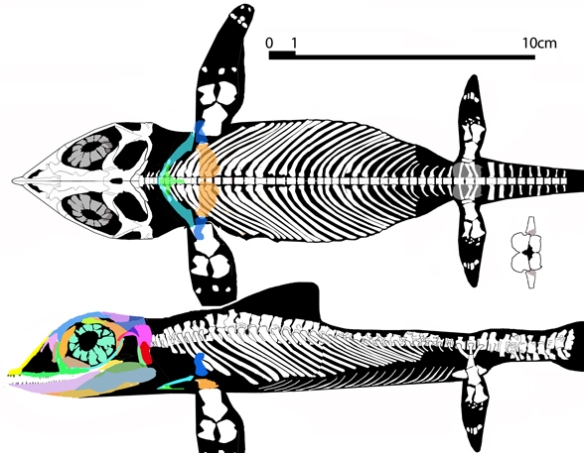 Not amphibious
2. That tiny neck, tiny cervical ribs and giant head (Fig. 1) strongly indicate that life above the water would be very difficult indeed. Then there’s a lack of ossified phalanges as the limbs turn into rather soft flippers. Then there’s the shortening of the limb bones and a lack of elbows and knees. Ironically, Cartorhynchus was less amphibious than its sister taxa, Pachypleurosaurus and Qianxisaurus. Then there’s the flat ventral surface, perfect for bottom dwelling underwater. Nothing but [a] drag on land.

Not a suction feeder
3.  Suction feeders, like seahorses, can have a tiny mouth, unable to open much. On the other hand, the mata mata turtle does not have a tiny mouth, but it does have a long neck and a strong hyoid apparatus, which quickly expands the neck creating the suction of water that impels prey back to the throat. Suction feeders also tend to lose their teeth. Cartorhynchus, but contrast, has a wide gape and large teeth, despite its pincer like premaxilla. The high coronoid process and large temporal fenestra indicate large jaw muscles were present, perfect for biting, unnecessary for suction feeding. There is no great hyoid apparatus here and no long neck for the water to rush into.