A recent online paper by Kümmel and Frey (2014) describes the mobility of the ‘thumb’ and medial toe in non-mammalian Synapsida and one extant mammal.

Figure 1. Manus of Galesaurus, a basal cynodont synapsid. PILs added. This is where grasping first emerged, later dropped by many later mammal clades, but retained by primates and other arboreal forms.

From their abstract
The the reduction of autopodial rotation can be estimated, e.g., from the decrease of lateral rotation and medial abduction of the first phalanx in the metapodiophalangeal joint I. Autopodial rotation was high in Titanophoneus and reduced in derived Cynodontia. In Mammaliamorpha the mobility of the first ray suggests autopodial rolling in an approximately anterior direction. Most non-mammaliamorph Therapsida and probably some Mesozoic Mammaliamorpha had prehensile autopodia with an opposable ray I. In forms with a pronounced relief of the respective joints, ray I could be opposed to 90° against ray III. A strong transverse arch in the row of distalia supported the opposition movement of ray I and resulted in a convergence of the claws of digits II–V just by flexing those digits. A tight articular coherence in the digital joints of digits II–V during strong flexion supported a firm grip capacity. 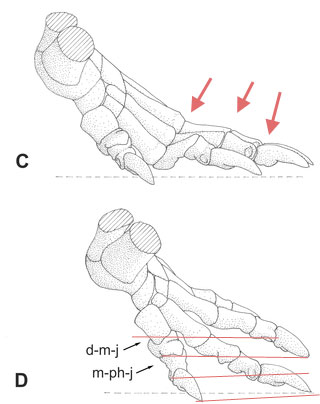 Not mentioned, or referenced, but clearly visible
is the presence of PILs (parallel interphalangeal lines) that enable the phalanges to work in sets.

If you ever wondered where your grasping hand first appeared, it is here (Figure 1) in cynodonts.  No matter that grasping later disappeared in many later mammal clades, it was retained by arboreal and carnivorous clades.

The authors discuss the alignment of the phalanges without discussing the 14-year-old paper on PILs (Peters 2000), which might have been appropriate in this study. So, it’s brought up here.

The arching of the metacarpals an metapodials is also shown here. A similar arching was shown to exist in the pes of Pteranodon (Peters 2000). That arching in the human metacarpals produces a fist clearly aligns the knuckles for branch grabbing. Otherwise, when flattened and useful only for clapping and slapping, the knuckles are not clearly aligned.

References
Kümmell SB and Frey 2014. Range of Movement in Ray I of Manus and Pes and the Prehensility of the Autopodia in the Early Permian to Late Cretaceous Non-Anomodont Synapsida. PLoS ONE 9(12): e113911.doi:10.1371/journal.pone.0113911 http://www.plosone.org/article