New data
added to the large reptile tree has changed the topology of the Lepidosauria. This is the biggest change I’ve seen in the last four years, yet it occurred in a fairly dark alley of the Amniota where very few researchers lurk.

Now the Tritosauria has been halved,
extending only from Tijubina to pterosaurs. Palaegama is still the outgroup. 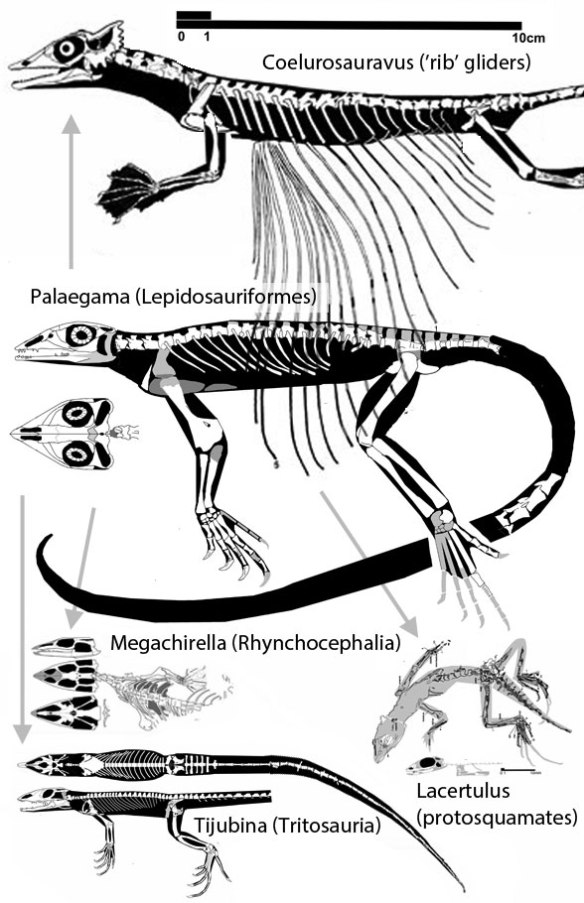 Figure 1. Palaegama is basal to Coelurosauravus (‘rib’ gliders), Megachirella (rhynchocephalians), Lacertulus (protosquamates) and Tijubina (tritosaurs). Taxa to scale. Note the miniaturization at the base of the Lepidosauria and the similarity of all these sister taxa.

Palaegama is still basal to the so-called ‘rib’ gliders (not ribs, but dermal extensions as we discovered here). It is also basal to all Lepidosaurs.

Tiny Scandensia remains as the last common ancestor of the Lepidosauria and the MFSN 19235 specimen is its larger predecessor.

This change followed the addition of several basal rhynchocephalians, like Megachirella, that shed new light on the origin of the Lepidosauria and the radiations that succeeded them. We looked at those additions here.

The interesting thing, and we’ve seen this before…
The order of the protosquamates is exactly the opposite as I originally thought. The logic behind this is like folding a piece of paper. The sister taxa at the fold are the same. The beauty of the new topology places the Permian Lacertulus at the base of its clade, where it belongs chronologically and nests the most derived taxon, Scandensia from the Early Cretaceous where it belongs. We’ve seen this before when M. Mortimer nested beaked dinosaurs basal to theropods and I pointed out the hypothesis that the tree was upside-down. See. It can happen to anybody.

The problem with Scandensia is, it looks a lot like the basal rhynchocephalian, Gephyrosaurus and it has long digits like Palaegama. So, I was readily fooled by what appeared to be the real deal — but it was not the real deal. When you look at the protosquamates (Fig. 2), there is no obvious direction to this clade or grade of lepidosaurs. The details of the skeleton reveal their relationships.